The global satellite communication market size was valued at USD 71.6 billion in 2021 and is expected to expand at a compound annual growth rate (CAGR) of 9.5% from 2022 to 2030. The increasing need for mobile satellite services and small satellites for earth observation services across the energy, oil & gas, defense, and agriculture industries is propelling the market growth. Satellite Communication (Satcom) has become an integral part of the modern communication infrastructure that involves an artificial satellite in a network. This is expected to propel the growth of the market. 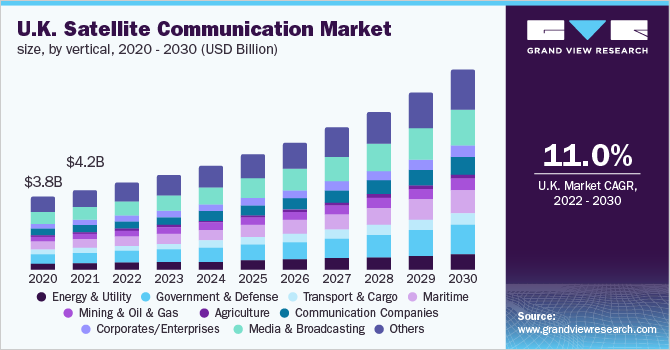 Governments across the globe are augmenting their military communication systems with commercial satellite capabilities. This is because of the increasing efforts of the government to support the rising communication requirements for various applications that include Airborne Intelligence, Surveillance, Reconnaissance (AISR), and Communications on the Move (COTM). These services require ubiquitous and stable coverage that is very well offered by satellite services.

As of January 2021, the Union of Concerned Scientists (UCS) has recorded 6,542 artificial satellites orbiting the earth, of which 3,372 satellites are active. Artificial satellites are responsible for transmitting an image, audio, and video data in the form of analog and digital signals across multiple locations in a network. The rise in mobile satellites, low-Earth orbit (LEO), and the proliferation of reusable rocket vehicles for commercial, military, and aerospace applications have transformed the Satcom industry.

Moreover, the adoption of next-generation technologies such as AI and IoT have foreshadowed the proliferation of intelligent transport systems (ITS). ITS allows users and freight operators to track vehicles in real-time, thus, enabling prompt sending and receiving of information. Satcom in transportation allows uninterrupted and seamless data transmission between the vehicle and the transport hub, and this efficiently replaces the need for terrestrial networks. Hence, using satellites in the transport and logistics network offers subsequent growth opportunities for the satellite communication market.

The equipment segment generated a revenue of USD 28.9 billion in 2021 and is expected to witness a significant CAGR over the forecast period. Factors including rising demand for uninterrupted communication in energy & utilities, agriculture, oil & gas, and defense, coupled with an increasing fleet of autonomous, connected vehicles, are anticipated to propel the segment’s growth.

The satcom equipment is used mainly in weather monitoring, military surveillance, navigation, and telecommunications applications. The equipment gathers real-time data during wars to detect hidden tunnels, trace movements, and integrate targets, among other applications. Rising demand for high throughput satellite services and the proliferation of cloud-based services in ground mobility platforms are supplementing the growth of the Satcom equipment market over the forecast period.

Satcom services have gained a significant adoption across the military & defense forces enabling them to deploy and expand connectivity across several military and defense assets, including fighter planes. The rising adoption of unmanned aircraft systems owing to their varied applicability in military and non-military applications has propelled the growth of satellite communication systems.

Operations, including Beyond the Line of Sight (BLOS), require constant connectivity between the aircraft and the ground-based pilot to retrieve images and data collected by the onboard systems. This has bolstered the growth of satellites across the aerospace & defense segment, as the applications and requirements for continuous & uninterrupted communication are increasing.

The broadcasting segment accounted for the largest revenue share of more than 22% in 2021. It is expected to grow at a notable CAGR of over 10% over the forecast period. The rising demand for satellite communications for radio and pay-TV applications has influenced the growth of the broadcasting segment. Satcoms can offer seamless connectivity in remote and far-off areas; however, the increasing adoption of over-the-top (OTT) services might hamper the growth of the market over the forecast period. 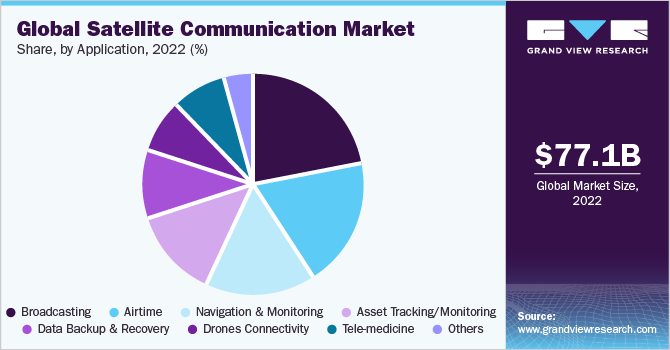 The adoption of internet services has been gaining traction worldwide over the past few decades owing to the expansion of network coverage and changing lifestyle patterns of individuals. This has increased the demand for content delivery among broadcasting service providers over the internet, thereby increasing the adoption of OTT services by gen-x. Satcom can transfer data with the help of navigational and observational satellites in agriculture and public safety applications. Therefore, the airtime segment is expected to witness the fastest growth over the coming years.

North America dominated the market with over a 32.0% share of global revenue in 2021. This is attributed to the growing demand for continuous communication by the military and defense industry, resulting in the high adoption of satellite communication equipment by the U.S. defense department. Also, many satellite communication providers, such as Telesat, Viasat, Inc., and EchoStar Corporation, contribute to the market growth. In addition, due to the upgrading of military communication infrastructure, the regional market is anticipated to expand significantly over the next few years.

Over the projection period, Asia Pacific is anticipated to witness a significant CAGR. This region's contribution and expansion are primarily attributable to countries like China and Japan. The increased usage of satellite antennas in the communications, IT, aerospace, and automotive industries is responsible for the expansion of the regional market over the forecast period.

Europe is predicted to witness the second-fastest growth, due to infrastructure modernization and rising passenger traffic in marine and coastal tourism. The need for Low Earth Orbit (LEO) satellites to provide backhaul networks for rural or inaccessible areas has also increased as 5G installations spread across the nation. Along with the technological developments in Geostationary (GEO) satellites, which offer high throughput and enhanced durability, LEO spacecraft provide reduced latency in Satcom.

The market is highly fragmented, with the presence of several market players. These market players strive to gain a higher market share by adopting various strategies. Additionally, satellite operators are investing a lot of money in developing Ka-band applications that will speed up the transmission of essential data while requiring minimum terrestrial infrastructure.

Moreover, they are also focusing on maintaining competitive pricing. The market players are engaging in partnerships, acquisitions, and mergers. For instance, in September 2019, SES SA and Dataset, which provides gateway internet services, entered into a partnership agreement to provide end-to-end connectivity in the Mediterranean Sea, servicing cargo and passengers across destinations including Italy, Spain, Greece, and Morocco. Some prominent players in the global satellite communication market include:

This report forecasts revenue growth at the global, regional, and country levels and provides an analysis of the latest industry trends and opportunities in each of the sub-segments from 2017 to 2030. For this study, Grand View Research has segmented the global satellite communication market report based on component, application, vertical, and region:

How big is the satellite communication market?

What is the satellite communication market growth?

Which segment accounted for the largest satellite communication market share?

b. North America dominated the market for SATCOM and accounted for over 32% share in 2021.

Who are the key players in the satellite communication market?

What are the factors driving the satellite communication market?

b. Key factors that are driving the SATCOM market growth include the escalating demand for small satellites for earth observation services in various industries such as oil & gas, energy, agriculture, and defense and increasing use of satellite communications by the companies to collect operational data to improve efficiency and to realize sustainable ways of conducting business.