The global scooters market size was valued at USD 32.5 billion in 2019 and is projected to expand at a compound annual growth rate (CAGR) of 0.1% from 2020 to 2030. The rising purchasing power of the middle-class population in developing countries and swift urbanization is expected to significant increase in demand. Besides, land and space-constrained cities with inadequate road infrastructure and high vehicular traffic are also some of the factors driving the adoption of this vehicle as an urban mode of personal mobility. 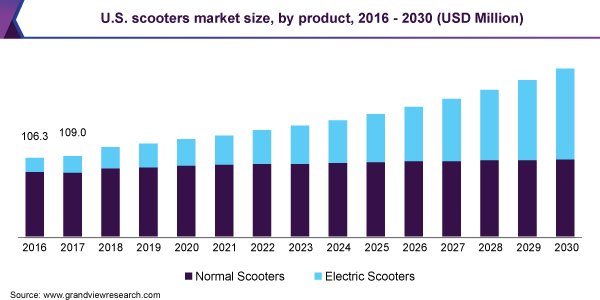 Benefits such as inexpensive last-mile transportation as against the on-demand transportation, ease of maneuver, the agility in crowed roads, and the ability to save a significant amount of time spent in traffic jams are the additional factors expected to fuel the market growth. However, the increasing preference for clean energy transportation and government subsidies to reduce the overall purchasing price of electric scooters is anticipated to show a significant drop in normal scooters from 2025 onwards.

The two-wheeler industry is anticipated to witness another year of demand shrinkage with unit sales to be estimated to decline owing to the Covid-19 outbreak’s impact on the economic growth and discretionary spending. The current situation is predominantly challenging for manufacturers and dealers. The ongoing pandemic has rigorously disrupted manufacturing operations, supply chains, and the development of new scooter models. This disruption is increasingly affecting all European markets, creating unsettling uncertainties for the two-wheeler industry. However, in the post pandemic scenario, the demand for low-cost electric two-wheelers is expected to gain upsurge as daily commuters will prefer avoiding public transport. The two-wheeler segment is expected to play a crucial role in uplifting the automobile sector post lockdown by offering affordable personal mobility options.

The first generation of the scooter was introduced in early 1915, which experienced a significant transformation over the decade resulting in current Internal Combustion Engine (ICE)-based scooters. The normal scooter (ICE scooter) is established as a widely accepted and preferred scooter across the world. Post globalization, the demand for normal scooters witnessed a surge across all the developing countries. With innovation in the automotive industry and economic development, four-wheeler demand increased among the affluent and wealthy customers. The market was soon divided by types of road vehicles including bicycles, kick scooters, motor scooters, motorcycles, and cars. Moreover, customers with moderate purchasing power prefer scooters and motorcycles over four-wheelers. Also, the urban population reciprocated positively towards owning a two-wheeler during the early adoption phase.

Furthermore, the distinct design and style of electric scooters have played a major role in increasing its hype in the market. The aspects considered in deigns of a scooter include shape, weight, color, and comfort. The color is often used to indicate the style of the customer or target a specific gender. During the initial launch of the first series of normal scooters, the common perception prevailed that it is for females only. However, the ease of driving and affordability played a crucial role in increasing its popularity and making it a gender-neutral vehicle.

The scooters market players have adopted the same designing principle by launching vehicles for both B2B and B2C customers. The delivery scooter has a basket attached to the rear of the scooter for storage. These vehicles have huge potential in the market, as it will help in reducing travel expenses. The regions including North America, Europe, Asia Pacific, Latin America, and Middle East and Africa, are witnessing steep growth in the online delivery market, which will further boost B2B scooter sales.

The normal scooter segment accounted for the largest revenue share of more than 95% in 2019. The rising popularity among consumers seeking a comfortable ride with the gearless driving system and at low operating costs as compared to the motorcycles. Also, the easy availability of petrol, impressive mileage, and safe long-distance drive established scooters as an everyday commuter vehicle. In 2019, the normal scooter segment dominated the market. However, the introduction of electric scooters started affecting market growth and product penetration.

Similarly, the year 2018 and 2019, witnessed the introduction of various electric scooter models, while 2020 has been a highly promising year for most manufacturers. The well-established two-wheeler manufacturers launched their electric scooters and invested in the installation of the charging infrastructure across various countries. For instance, KYMCO and Gogoro, Inc. expanded their reach in other regions to capture the untapped market. Whereas, VASSLA ELECTRIC SCOOTERS., YAMAHA Motor Pvt. Ltd., GenZe By Mahindra, and PURE EV among other players integrated swappable battery system in their electric scooter models.

The increasing penetration of electric two-wheelers will hamper the overall market demand for normal variants by 2030. The rate of penetration of electric scooters is highly dependent on supporting infrastructure for a two-wheeler battery swap/ charging station in each city of the target countries. Moreover, by 2030, more vendors are expected to enter the market, intensifying the competition in terms of price and distinguished features. Thus, the market is expected to witness considerable growth over the forecast period.

The conventional electric scooter segment accounted for the largest revenue share of over 90% in 2019 and is anticipated to maintain its dominance over the forecast period. A lower-priced conventional scooter would incur fewer expenses, and lower Total Cost of Ownership (TCO) compared to a normal scooter. In the conventional segment, the market leaders include China- and Taiwan-based manufactures such as Gogoro, Inc., Yadea Technology Group Co. Ltd., NIU International, and Jiangsu Xinri E-Vehicle. 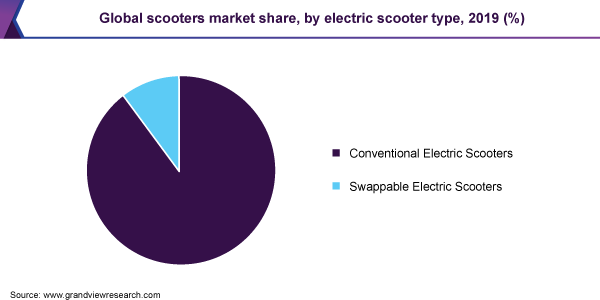 However, the swappable battery electric scooter segment is expected to expand at a substantial CAGR of 20.4% over the forecast period. Swappable battery electric scooters available in the market are an alternative over plug-in/ conventional electric two-wheelers. In addition, the cost of operating these vehicles depends on battery capacity, distance traveled, and charging expenses. The vendors offering these two-wheelers do not include the battery price in the upfront vehicle price, thereby reducing overall purchase cost. These factors are likely to aid in the segment growth over the forecast period.

Asia Pacific accounted for the largest revenue share of over 75% in 2019 and is expected to continue its dominance over the forecast period. The region has emerged as one of the most prevalent regions owing to the advantages over ICE scooters. The concern across Asian countries such as China, India, and Japan over fluctuating fuel price and air pollution caused by gas emissions has encouraged regional demand. Most electric scooter manufacturers have emerged from China, Taiwan, and Japan, acquiring the highest industry share. China has emerged not only as the leading consumer of electric scooters but also as the leading producer and importer. Vendors active in China market include Jiangsu Xinri Electric Vehicle Co., Ltd., Yadea, AIMA Group, Zhejiang Luyuan, and Niu International, among others.

North America has been highly receptive to the inclusion of electric scooters. The shift from normal (ICE scooter) to conventional and swappable electric two-wheelers resulted from the need to reduce environmental pollution. Also, the pressure to reduce carbon footprint by replacing the existing fleet of normal scooter with their electric counterparts is further driving the market growth. The scooter culture is not much prevalent in U.S. in comparison to the European countries. However, the scenario is changing with more millennials residing in the cities opting for convenient lightweight vehicles with less operational cost.

Most of the key players are expanding their manufacturing internationally to capture the growing demand for electric two-wheelers. For instance, Gogoro Inc., one of the leading Taiwanese companies, has emerged strongly in Europe and entered the U.S. market, strengthen its global network. Moreover, the company’s swappable battery electric scooter has revolutionized the market and many Asian vendors are affiliating with Gogoro to integrate the swappable battery technology in their electric scooters. Furthermore, prominent Japanese companies such as Honda, Yamaha, Suzuki, and Kawasaki have rolled out their variants of electric scooters, further intensifying the competition in the Asian market. Some prominent players in the scooters market include:

This report forecasts revenue growth at global, regional, and country levels and provides an analysis of te latest industry trends in each of the sub-segments from 2016 to 2030. For the purpose of this study, Grand View Research has segmented the global scooters market report on the basis of product, electric scooter type, and region: