The global seasoning & spices market size was valued at USD 35.38 billion in 2021 and is expected to expand at a compound annual growth rate (CAGR) of 5.6% from 2022 to 2030. The growing awareness of the medicinal benefits of spices & herbs along with the rising number of people cooking at home has been attributed as the major factor driving the growth of this market. Furthermore, the increasing willingness of buyers to pay a premium price for new and ethnic flavors has been fueling the market. Local cuisines have been gaining international recognition, owing to their flavors of cuisines, which are also driving the growth. 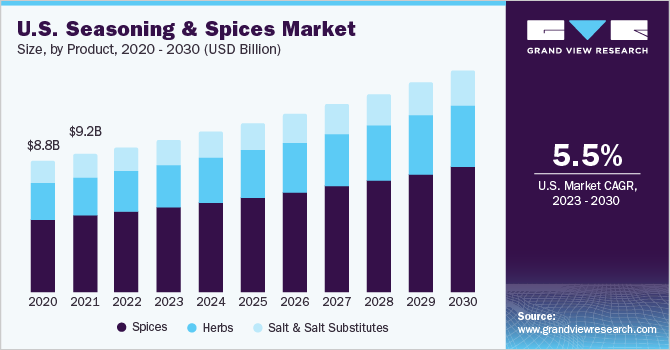 The COVID-19 pandemic had a significant effect on the supply chain of the seasoning & spices market. The government restrictions, transportation challenges, labor shortages, supply scarcities, infrastructural interruptions, and import delays have disrupted the supply chain of the industry. The production of spices & herbs is subject to unprecedented instability owing to factors such as weather, water scarcity, etc. Further, shutdowns and lockdowns implementation in the spice-producing countries, including China, India, and Vietnam, impacted the raw material supply and consumption in the foodservice industry.

Asian cuisines such as Thai, Indian, Chinese, and Vietnamese contain a wide variety of spices & herbs to impart unique taste and flavor to the dishes. Many consumers in the U.S. are becoming increasingly fond of cooking at home. Thus, there has been a surge in the sales of various spices, such as pepper and ginger. A variety of campaigns and initiatives aimed at encouraging people in the country to cook more meals at home to reduce stress have been propelling the seasoning & spices market.

For instance, in July 2020, Spiceology, Inc. partnered with Pixlee and Loop Commerce to set up the “Coworkers Connecting Through Cooking” initiative for employers looking for innovative and fun ways to re-energize and deepen connections with their employees during the ongoing coronavirus pandemic. The initiative was aimed at bringing employees together virtually by cooking at home and included guided access to engaging, live-streamed cooking classes, enabling coworkers to share their culinary adventures digitally with their colleagues.

The initiative comprised Spiceology's unique, innovative gift set blends that were offered at wholesale prices. The company also held live streaming cooking classes for companies to help their employees have some fun together while cooking more at home with their families. Further, support by companies to help a farmer grow more seasoning in the country is expected to boost the market. For instance, in March 2022, Nestlé India announced to help farmers by implementing a sustainable sourcing program for spices that are used in their product, Magic Masala.

Evolving consumption patterns, increasing urbanization, rising income levels, and newer food experiences are boosting the demand for seasoning globally. Moreover, an increasing number of customers in Europe and North America have started using a variety of spices in their local cuisines, which is opening new opportunities for the manufacturers in the global market.

The spices segment held the largest market share in the global revenue for 2021 and is expected to maintain dominance during the forecast period. Globalization has exposed people to various flavors from around the globe and made them aware of the nutritional benefits associated with spices, which has propelled their demand in the international market. As spices can produce different flavors easily, their demand is growing at a fast pace in the global market. Turmeric, pepper, and cinnamon are the most consumed spices in the world. However, other spices that are commonly available in the market include cloves, garlic, cardamom, ginger, cinnamon, chili, vanilla, and cumin seeds.

The herbs segment is anticipated to grow at the second-highest CAGR during the forecast period. The growth of the segment can be attributed to the several health benefits associated with herbs, such as garlic, parsley, oregano, fennel, peppermint, and basil. Consumers across the globe are increasingly using these herbs for their taste and their exceptional medicinal properties. For instance, garlic is most often used for its strong aroma and unique flavor; however, it is also very effective in treating the common flu and similar illnesses. It is also helpful in the treatment of hypertension and cardiovascular diseases.

The powder segment held the largest market share in the global revenue for 2021 and is expected to maintain dominance during the forecast period. Several foodservice outlets to enhance the flavor, taste, and color of prepared foods are incorporating the use of powdered spices. According to a 2019 survey conducted by Kalsec, a leading global producer of innovative spice and herb flavor extracts, more than half of consumers prefer hot & spicy food options for their meals, owing to which food processors, restaurants, hotels, cafés, among others have been using a variety of powdered spices & seasonings.

The whole seasoning & spices segment is anticipated to grow at the second-highest CAGR during the forecast period as the incorporation of whole spices enhances the aroma and flavor of the meals & dishes, thus driving the segment growth. It is used in main dishes, entrées, dips, sauces & condiments, and snacks. Spicy desserts and beverages containing whole spices or seasonings such as mint, ginger, rosemary, clove, and parsley tend to appeal to several consumers, which is driving their usage in the foodservice sector.

The foodservice channel accounted for a significant share of the global revenue in 2021 and remains the primary source of consumption of seasonings & spices. Food processors, QSRs, cafés, hotels, and restaurants are the primary foodservice outlets offering a range of seasonings and spices in their dishes as consumers tend to dine out more. Several foodservice outlets take inspiration from the cuisines that consumers enjoy the most, which helps them to create a blend of products. Foodservice establishments were shut down due to fear of spreading the virus during the pandemic, which severely impacted this segment. However, as jurisdictions ease up on crowd-size restrictions, consumers are feeling more comfortable eating out. 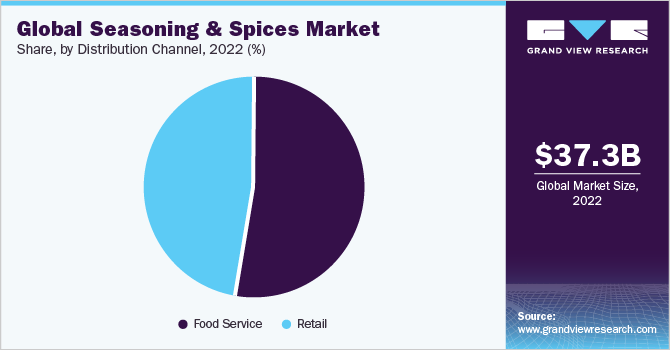 The retail channel is expected to register faster growth during the forecast years from 2022 to 2030. The global market is characterized by several major spice processing and marketing companies, which grind imported or domestically produced spices & seasonings, pack them in a variety of containers and sell them at retail stores under their brand or private label names. Furthermore, sales through retail channels are expected to remain robust after COVID-19 as trends buoy demand. Spice consumption will stay strong as consumers accustomed to cooking during the pandemic keep making meals at home. Further, consumers have been prompted to use seasoning to grill their meat, fish, and vegetables to enhance their flavor, which is also expected to drive the segment’s growth.

Asia Pacific made the largest contribution to the market in 2021. The growing consumption of seasoning in the region is also attributed to the increase in disposable income, the emergence of several domestic brands of spices and herbs, and the rise in marketing and promotional activities. Most of the spices and herbs are grown in countries such as India, Vietnam, China, and Thailand, which makes the Asia Pacific one of the major exporters in the world. The globalization of markets and the migration phenomenon contributed to the modification of food preferences of consumers, which has opened new opportunities for foodservice outlets to incorporate a variety of seasonings in their cuisines.

North America, followed by the Asia Pacific, is the fastest-growing segment from 2022 to 2030. The market is expected to witness considerable growth in the U.S. due to the consumers' willingness to experiment with new flavors and the high demand from Asian immigrants residing in the country, displaying an interest in ethnic tastes. The popularity of Indian and Asian cuisines and the rising consumption of cooked foods are the major growth drivers for the spices and seasonings market in North America.

The seasoning and spices market is characterized by the presence of a few well-established players and several small and medium players. The majority of the market share is captured by key players like Ajinomoto Co, Inc.; ARIAKE JAPAN CO., LTD.; Associated British Foods plc; Kerry Group, and McCormick & Company, Inc. These manufacturers are adopting various strategies, including new product launches, expansion of product portfolios, and mergers & acquisitions. For instance:

Some of the key players operating in the global seasoning & spices market are:

This report forecasts revenue growth at global, regional & country levels and provides an analysis of the latest trends and opportunities in each of the sub-segments from 2017 to 2030. For this study, Grand View Research has segmented the seasoning & spices market based on product, form, distribution channel, and region.

How big is the seasoning & spices market?

What is the seasoning & spices market growth?

Which segment accounted for the largest seasoning and spices market share?

b. The Asia Pacific dominated the seasoning & spices market with a share of 37.6% in 2021. This is attributable to the rising demand for ethnic flavored foods among middle-income groups in countries including China and India.

Who are the key players in seasoning and spices market?

What are the factors driving the seasoning and spices market?

b. Key factors that are driving the seasoning & spices market growth include increasing buyersâ€™ willingness to pay a premium for new flavors and ethnic tastes and rising demand for ready-to-use spice mixes as convenient options in the food service industry.