The global sepsis diagnostics market size was valued at USD 615.4 million in 2021 and is expected to expand at a compound annual growth rate (CAGR) of 9.6% from 2022 to 2030. Factors, such as the high prevalence of sepsis, increasing awareness, and the introduction of technologically advanced diagnostic solutions are expected to significantly fuel the market growth over the forecast period. Sepsis is a severe medical condition caused by the overwhelming immune response to an infection. Recent studies have shown an increasing prevalence of this life-threatening disease around the globe. 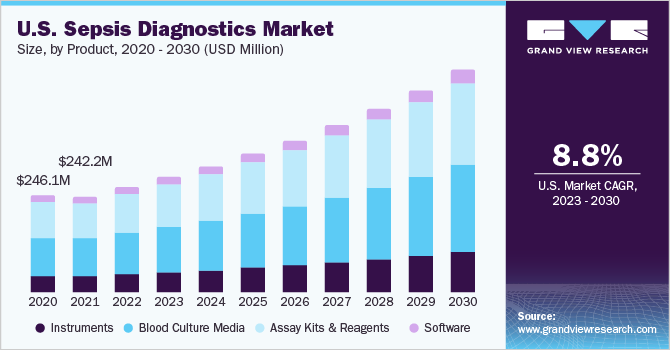 According to the data published by the WHO in April 2018, globally, this condition affects more than 30 million people and leads to around 6 million deaths every year. The same source states that globally, around 3 million newborns and 1.2 million children suffer from this condition every year. Such a high prevalence is anticipated to increase demand for its diagnostic solutions, thus fueling the market growth over the forecast period. The outbreak of novel coronavirus (COVID-19) and a subsequent increase in the risk of developing sepsis are some of the key contributors driving the demand for diagnostics solutions.

According to the Global Sepsis Alliance in April 2020, around 30% of COVID-19 patients had evidence of liver injury and around 75% reported a depressed immune response in Seattle, U.S. Accord. As per the Global Sepsis Alliance, viruses responsible for COVID-19, influenza, pneumonia, meningitis, and others are primarily responsible for causing sepsis. Based on a retrospective study, hospitalized COVID-19 patients pose a higher risk of developing coinfections. The study revealed that among the non-survivors, around 50% of patients had a secondary infection, almost 100% of the non-survivors had sepsis, and about 70% had septic shock.

Thus, one of the critical causes of mortality among COVID-19 patients is sepsis. Currently, most of the existing diagnostic tests can take up to 72 hours to process and provide final results. Thus, high demand for rapid diagnostic tests exists in the market for the early diagnosis of sepsis that could save thousands of lives. In February 2019, researchers at the University of Strathclyde discovered a ground-breaking and cost-effective test for earlier diagnosis of this disease. This newly developed test uses a microelectrode to analyze the patients’ blood and can provide final results in around two and a half minutes.

Key players in the market have lucrative opportunities to strengthen their market position with the development and launch of such advanced rapid tests. Increasing regulatory approval and the introduction of technologically advanced diagnostic solutions are expected to be the prominent factors facilitating market growth over the forecast period. For instance, in May 2020, Beckman Coulter launched its new DxH 690T hematology analyzer with early sepsis indicators in the U.S. In August 2018, Japan-based Sysmex Corp. launched its new HISCL Presepsin Assay Kit for determining levels of presepsin, the main test parameter for bacterial sepsis.

This kit is designed to achieve early diagnosis of bacterial sepsis with high precision as compared to conventional biomarkers. Hospital-Acquired Infections (HAIs) can trigger sepsis, especially in the geriatric population, newborn babies, and people suffering from chronic diseases. The prevalence of HAIs is increasing owing to the high incidence of various chronic diseases, such as diabetes. A rise in the number of admissions in acute care hospitals often leads to infections, which cause sepsis. Sepsis, in such a group of patients, sometimes leads to re-hospitalization within 30 days of treatment, which propels the demand for its diagnostic products in hospitals.

Hospital-acquired infections majorly include Urinary Tract Infections (UTIs) and Surgical-Site Infections (SSIs), which can result in sepsis. According to the WHO, 7 out of every 100 hospitalized patients are likely to develop HAIs in developed countries, whereas this number is likely to increase to 10 in developing countries due to poor healthcare infrastructure. In addition, according to the CDC estimates, every year, around 1.7 million patients suffer from HAIs and around 99,000 patients die due to HAIs in the U.S.

In a study conducted on Patients with sepsis in Thailand, it was observed that a PCR-based system, Septifast assay, delivered superior diagnostic performance in comparison to blood culture. The instruments segments are also reported to show a constant growth rate over the forecast period owing to the rising awareness among the general population about healthcare and the increasing rate of surgical procedures. For instance, in September 2019, Guthrie, a U.S.-based integrated health care system, deployed Wolters Kluwer’s POC Advisor for the detection and treatment of sepsis at four area hospitals.

The microbiology technology segment dominated the global market and accounted for the largest share of more than 48.5% of the overall revenue. This can be attributed to the fact that microbiology technology allows accurate detection and identification of microorganisms for sepsis diagnosis through the application of culture media tests. In addition, new strategic initiatives by key players are driving the segment growth. For instance, in April 2019, BD launched its new BD BACTEC platelet quality control media, which helps identify and decrease the incidence of sepsis in patients receiving platelet transfusion.

The bacterial sepsis segment held the largest revenue share of 79.5% in 2021 and is anticipated to maintain its lead over the forecast period owing to the rise in cases of bacterial sepsis, the higher occurrence of hospital-transmitted infections, and the rising number of surgical procedures conducted. According to the study published by SAGE Journals in January 2019, bacterial sepsis is the most common type, with 62.2% of patients infected with gram-negative bacteria and 46.8% with gram-positive bacteria. Based on pathogens, the market is segmented into bacterial sepsis, fungal sepsis, and others.

In the bacterial sepsis segment, the gram-negative bacteria sub-segment is anticipated to dominate the market over the forecast period. The fungal sepsis segment, although having less revenue share, is expected to maintain a significant CAGR over the forecast period. One of the major drivers of the pathogen segment is the increasing availability and the introduction of a new and wide range of sepsis diagnosis devices for pathogen detection. These devices are more commonly launched in the more technologically developed North American and European markets. Robust R&D activities and increasing regulatory approvals of novel solutions are expected to support the segment growth. For instance, in April 2019, GenMark Diagnostics, Inc. received U.S. FDA approval for its new panel assay, developed to detect gram-negative bacteria causing sepsis.

Based on testing types, the global market has been further categorized into laboratory testing and POC testing. The laboratory testing type segment dominated the market in 2021 with a share of more than 85.00%. This is mainly due to the fact that lab testing has greater accuracy in comparison to POC testing while diagnosing sepsis. Clinical laboratory testing provides an in-depth analysis of the pathogen and its drug resistance profile. In addition, routine testing of lactate levels, which are nonspecific, however, a useful marker of sepsis, is effectively performed in laboratory settings. 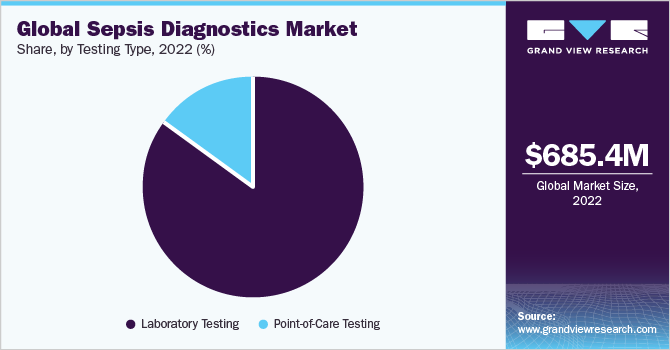 With the advent of technologically advanced products, the reliance of the public and physicians on these labs has significantly increased. The laboratory testing type segment is projected to expand further at the fastest growth rate over the forecast period due to the rapid diagnosis with higher accuracy. In addition, the increasing number of diagnostic laboratories is estimated to facilitate the growth of this segment over the forecast period. For instance, in July 2018, Thermo Fisher Scientific Inc., a U.S.-based diagnostic solutions provider, launched its new B·R·A·H·M·S PCT, a direct PoC assay designed for the early diagnosis of bacterial infection and sepsis.

North America dominated the global market in 2021 and accounted for the largest revenue share of more than 39.7%. The region is anticipated to maintain its lead throughout the forecast period. This growth can be attributed to the presence of a well-established healthcare infrastructure, which has led to a rise in the adoption of advanced diagnostic solutions in the region. In addition, the strong presence of key players and a supportive reimbursement framework in this region are boosting the market growth. Furthermore, the high incidence of sepsis and infectious diseases is expected to fuel the demand for novel diagnostic solutions.

Asia Pacific is estimated to be the fastest-growing regional market from 2022 to 2030. Middle East Africa is also expected to witness significant growth during the forecast period on account of the rising demand for sepsis diagnostic solutions in countries with a high prevalence of infectious diseases, such as Algeria and Morocco. The lucrative growth registered by this region is also believed to be an outcome of the increase in initiatives by regional and international players to improve access to novel laboratory automation solutions. However, the lack of awareness in some of the developing countries might restrain the market growth to some extent.

The key players operating in the market are adopting inorganic growth strategies, such as mergers and partnerships, for the development of novel diagnostic solutions. For instance, in January 2020, Roche and Inotrem SA, a France-based company, formed a strategic agreement for the commercialization of a companion diagnostics test intended for septic shock. Moreover, in May 2020, the Biomedical Advanced Research and Development Authority (BARDA) collaborated with Beckman Coulter for the development of a digital algorithm to identify sepsis in patients with COVID-19.

In December 2021, SeptiCyte RAPID, a product by Immunoexpress, was granted approval by the United States Food and Drug Administration (FDA). In October 2021, Prenosis Inc. extended its existing deal with Roche Diagnostics to increase the speed of clinical diagnosis of sepsis. Prenosis Inc. is a precision diagnostics firm that applies Artificial Intelligence (AI) to improve clinical diagnosis. Some of the prominent players in the global sepsis diagnostics market include:

This report forecasts revenue growth at the global, regional, and country levels and provides an analysis of the latest industry trends in each of the sub-segments from 2018 to 2030. For this study, Grand View Research has segmented the global sepsis diagnostics market report based on product, technology, pathogen, testing type, method, end-user and region:

How big is the sepsis diagnostics market?

What is the sepsis diagnostics market growth?

Which segment accounted for the largest sepsis diagnostics market share?

b. Based on products, blood culture segment held the largest share of 45.9% in 2021, since blood culture is considered to be the most convenient and cost-effective mode of testing by clinicians.

Who are the key players in the sepsis diagnostics market?

What are the factors driving the sepsis diagnostics market?

The most common concern for the governments of all COVID-19 hit nations is the excruciating need to screen for and test large numbers of patients for possible Sars-Cov-2 infection. As a result, most of them are facing major shortages in the supply for diagnostic kits to test for the virus. Diagnostics virology entities are under immense pressure to provide reliable testing kits, and there is a surge in demand for in-vitro or point-of-care testing capacities by labs across a large number of countries. The report will account for COVID-19 as a key market contributor.