The global server market size was valued at USD 57.56 billion in 2018 and is expected to grow at a compound annual growth rate (CAGR) of5.4% from 2019 to 2025. The server is a device that provides data, access, and communication services across the computer network. Increasing demand for data centers is a major factor in driving the market growth. Similarly, companies replacing existing equipment to ensure reliability, data storing capacity, and system speed are also expected to spur the demand for servers. 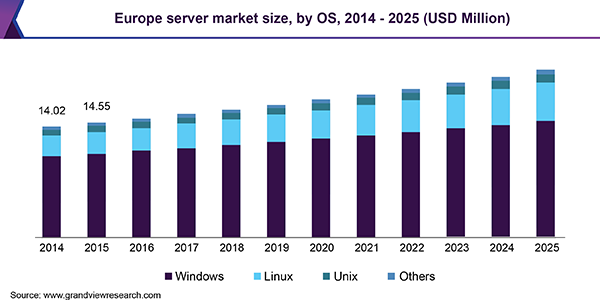 Advent and growing adoption of new technologies, such as cloud and big data are anticipated to substantially impact market growth. An increase in the number of OEMs and start-ups is fueling the demand for servers in different sectors. Newer applications that demand specific computing requirements from users and service providers are increasingly adopting cloud servers for efficient functioning. The rise in such applications coupled with technological advancements such as virtualization, advanced management modules, and flash storage is expected to propel the demand.

To enhance networking, enterprises are adopting virtualization or cloud servers. These servers allow organizations to cut down on the maintenance and operational cost of their IT infrastructures. Since physical servers require floor space and dissipate heat, organizations had to invest heavily in data center maintenance with the installation of cooling equipment such as air conditioners. Therefore, virtualization and provisions, such as renting servers are gaining traction from a large number of organizations.

Despite the aforementioned benefits and technological advancements, the server market is anticipated to face certain challenges. Complexity in the selection of right server equipment and rising demand for customized applications is expected to impede the growth. Further, the high cost of installation and maintenance may pose a challenge to the demand over the forecast period. However, a growing need for centralized access systems coupled with Bring Your Own Device (BYOD) policy in enterprises is expected to fuel the demand for servers from 2019 to 2025.

Government initiatives undertaken to promote digitization for different e-portals for various activities are increasing the demand for the adoption of IT infrastructure. To connect with the government through e-governance portals and to track different activities, IT infrastructure is a mandate. Through such portals, citizens can directly track regional and global developments without any manual paperwork and unnecessary delays. The digitalization of the above-mentioned government services is anticipated to create a demand for data storage and analysis. These factors are expected to surge the demand for servers over the forecast period.

Usually, the servers are adopted for the private data centers and primarily used for a few sets of applications. The major applications covered by these products are web hosting, file transfer, e-mails, and system collaboration. The products have witnessed developments in terms of storage capacity, scalability, processors, and power consumption over the last few years.

Microservers are developed for small scale operations and cost-effective as compared to other servers. Therefore, they are primarily adopted for the first-time installation, usually by small scale enterprises. Microservers are anticipated to witness stable growth in the next six years. Blade servers are expected to project the fastest CAGR during the forecast period, followed by tower servers.

Windows market captured the maximum value share in 2018 and is expected to dominate the server market over the forecast period. The high market share is attributed to the popularity of Windows OS, as computer systems in most enterprises are Windows OS based. However, the Windows OS market is expected to witness slow growth over the forecast period owing to the increasing popularity of open-source Linux OS.

Linux OS segment is anticipated to witness a significant CAGR exceeding 7% from 2019 to 2025. The segment is gaining traction from enterprises as it lowers down the system cost due to the open-source platform. Also, the OS does not involve any downtime as the systems do not require reboot and restart. Linux OS also offers a large number of applications such as web hosting, data analytics, and proxy without any additional purchase of software platforms, which makes it more cost-effective than Windows OS. 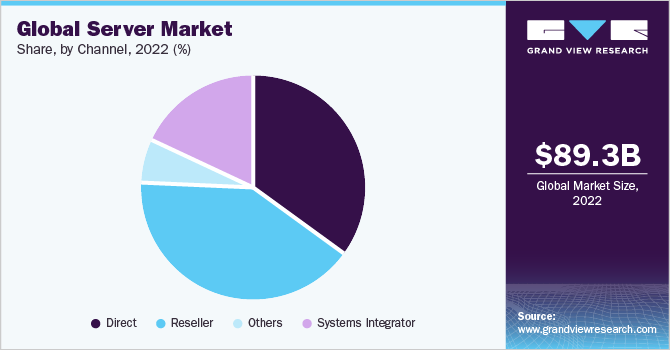 Unix OS is the oldest version of Linux OS, and therefore, the Unix OS market will decline throughout the forecast period. Existing data centers are updating the OS to Linux, which facilitates the mission-critical business operations of enterprises. Windows OS maintains its dominance due to the early adoption and availability as compared to Linux OS. However, growing awareness regarding the Linux OS is anticipated to challenge the growth of the Windows OS market during the forecast period.

North America dominated the overall market in 2018 with a revenue share of over 30%. The regional market is likely to retain its dominance over the forecast period as well. Early adoption of server technology in the region is a major factor contributing to the large market share and high growth rate of the region. Additionally, factors such as increasing investments from the data center and hyper-scale cloud providers are anticipated to drive the regional market in near future.

Asia Pacific is expected to expand at the fastest CAGR of more than 7% over the forecast period owing to the growing penetration of digital technology through smart gadgets. The government initiatives taken to develop smart cities have resulted in the growing need for IT infrastructure leading to the development of data centers. Latin America is anticipated to witness the second-fastest growth followed by the Middle East and Africa owing to the growing cross border business operations thereby, resulting in the need for adoption of IT infrastructure.

The market is consolidated and leading companies dominated the majority of value share in 2018. Increasing demand from enterprises has resulted in higher Average Selling Prices (ASPs) for servers. Enterprises are buying high configuration servers that support resource-intensive workloads and are highly-priced, thus increasing server’s ASP.

Asia Pacific is dominated by the telecom and IT industry and the growing BFSI industry. The key players such as Microsoft Corporation; Dell Technologies Inc.; Hewlett-Packard Corp.; IBM Corporation; FUJITSU; Inspur Technologies Co. Ltd.; Huawei Technologies Co., Ltd.; and Oracle Inc. are expanding their operations in the Asia Pacific as the region has witnessed growing GDP and is emerging as the major marketplace for digital technology. The region has also experienced high penetration of digitally compatible gadgets such as wearables and smartphones. Besides, growing broadband connections are creating an environment for the larger adoption of IT infrastructure to facilitate critical business operations and enhance decision making. Some of the prominent players in the server market include:

Segments Covered in the Server Report

The report forecasts revenue growth at global, regional, and country levels and provides an analysis of the latest industry trends and opportunities in each of the sub-segments from 2015 to 2025. For this study, Grand View Research has segmented the global server market report based on product, OS, and region:

How big is the server market?

What is the server market growth?

Which segment accounted for the largest server market share?

b. North America dominated the server market with a share of 28.9% in 2019. This is attributable to increasing investments made by data center and hyper-scale cloud service providers in the region.

Who are the key players in server market?

What are the factors driving the server market?

b. Key factors that are driving the market growth include increasing adoption of state-of-the-art technologies such as cloud computing and Big Data.