Growing energy demand coupled with depleting conventional gas reserves has led to a shift in focus towards decreasing reliance on conventional natural gas. This shift has been driving the demand for unconventional gases which comprises of shale gas other than coal bed methane (CBM), tight gas and gas hydrates. 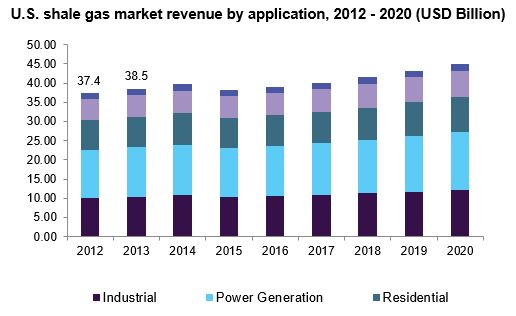 A partial solution to this problem is the use of unconventional resources. Shale is one of the major unconventional gases being explored and produced. Global shale gas production is concentrated in North American countries such as the U.S. and Canada. In Asia Pacific, large technically recoverable shale gas reserves have been found.

However, there has been very little commercialization till date, with production expected to commence by 2015. Foreign investors have formed joint ventures and mergers with Asian companies due to potential reserves and possibility of synergic benefits.

U.S. was dependent on gas imports to fulfil demand of energy in the past. But with technological breakthrough regarding shale gas exploration techniques and presence of huge shale gas reserves has resulted the country to become self sufficient and would dominate as the major shale gas exporter in the forecast period.

Environmental issues caused by horizontal drilling and strong public opposition especially in Poland and France are expected to inhibit the European shale gas market growth. The prices of natural gas were greatly impacted due to the production of unconventional gas especially in the U.S. and gradually they declined since 2008 as the production of shale gas mushroomed, affecting the global gas prices.

In addition, regulatory and energy agencies around the globe have been supporting the exploration, development and production of shale gas to meet the growing demand for natural gas. Government agencies such as the U.S. Energy Information Administration (EIA) have published data on unconventional gas reserves.

In addition, some industry-led initiatives such as Gas Shales in Europe (GASH), and Global Shale Gas Initiative (GSGI) are in the process of determining technically recoverable gas estimates in Europe and North America.

GASH is a European shale gas initiative started in 2009 which has been sponsored by ExxonMobil, Statoil, Total, and GDF SUEZ and managed by German Research Centre for Geosciences (GFZ) and other institutes. GSGI was launched in April 2010 by the U.S. Department of State to identify and develop shale gas resources. Countries such as India, China, Poland, and Jordan have been part of this initiative.

Key application segments analyzed and reported in this study include industrial, power generation, residential, commercial and transportation. Power generation emerged as the leading application market for shale gas and accounted for 30.4% of total market volume in 2013. 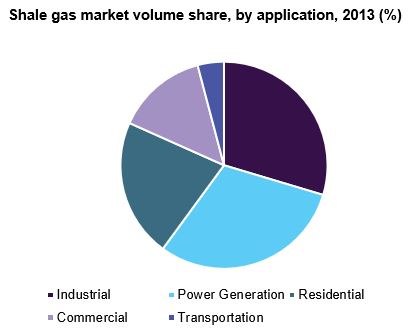 Some of the major countries around the world are pledging to curb power generation from coal power plants due to high emission levels. This would lead to boost the market for shale gas for power generation application as it generates low emission and provide cleaner alternative as compared to coal based power plants.

Shale gas has been slowly replacing conventional natural gas in industrial space mainly in the U.S. and Canada. However, transportation is expected to be the fastest growing application market for shale gas at an estimated CAGR of 10.8% from 2014 to 2020.

Growing demand for alternative fuels such as compressed natural gas (CNG) and autogas (LPG) is expected to drive the demand for shale gas in transportation industry over the next six years. The global market for shale gas for commercial applications is expected to reach a market worth USD 9.19 billion by 2020, growing at a CAGR of 5.3% from 2014 to 2020.

The majority of shale gas is produced in North American countries of the U.S. and Canada. These two countries combined sum up the global shale gas production till 2012. U.S emerged as the leading shale gas producing country and accounted for 91.8% of total market volume in 2013. The U.S. shale boom has changed the overall energy scenario of the nation, prior to shale gas development; the U.S. was a net importer of natural gas.

However, due to rapid exploration and production activities of shale gas, U.S. for the first time in many years emerged as a net exporter of natural gas in 2012. Canada trailed the U.S. in the overall market and accounted for 8.2% of shale gas produced in 2013.

However, as per estimates, China is the country with most recoverable shale gas reservoirs and eyeing this huge market potential, many companies (both Chinese and foreign) have been investing heavily to explore and produce shale gas in the country.

China reported a total of 30 million cubic feet of shale output in the year 2012 increased by more than six times to 200 million cubic feet by the end of 2013. China has been rapidly expanding its horizon to explore and produce shale gas in the region. The Chinese government has also been providing substantial support in the form of financial incentives and tax benefits to companies operating in shale gas market in China.

Chinese government has set a goal of producing nearly 6.8 billion cubic meters of shale gas in the year 2015. These sort of targets and initiatives from the Chinese government will attract investments as well as major vendors in the country in the forecast period.

Owing to the above-mentioned factors, Asia Pacific is expected to be the fastest growing market for shale gas over the forecast period at an estimated CAGR of 66.7% from 2015 to 2020. Recently, PetroChina’s Changning-Weiyuan and Fushun-Yongchuan areas along with Sinopec’s Fuling block have built a new shale gas production facility with a capacity of 600 million cubic feet.

The global market for shale gas is highly competitive in nature and is led by top multinational oil & gas conglomerates which are present across the value chain. Conventional oil & gas companies coupled with companies focusing only on alternative energy forms the mix of the market. The shift in focus towards developing shale gas basins in China is expected to remain a key strategy for the market participants.

Vendors are investing for research & development for better exploration techniques to reduce cost of drilling and extraction. These technological advancement aimed by vendors will lead to enhance their growth & market share in the forecast period.

This report forecasts revenue and volume growth at global, regional & country levels and provides an analysis on the industry trends in each of the sub-segments from 2012 to 2020. For this study, Grand View Research has segmented the global shale gas market on the basis of application and region.