The global sinus dilation devices market size was estimated at USD 1.79 billion in 2017. It is likely to witness a CAGR of 8.9% during the forecast period. Growing healthcare expenditure in developed, as well as developing, economies is anticipated to be one of the major factors contributing to the market expansion. Arise in awareness levels regarding Minimally Invasive Surgery (MIS), especially in emerging regions like the Asia Pacific, is also expected to boost market development over the next few years. 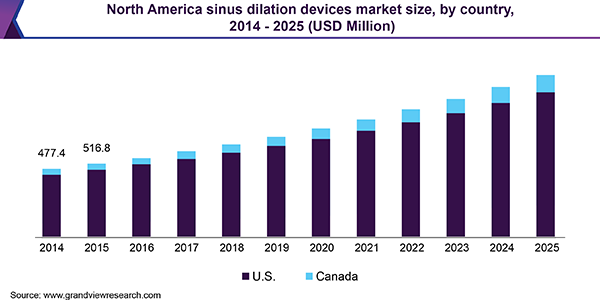 Growing adoption of MIS in developed, as well as developing, countries owing to the advantages associated with it, such as reduced blood loss and less recovery time and hospital stays is likely to propel the growth of this market. Minimally invasive surgeries, such as Functional Endoscopic Sinus Surgery (FESS), are widely used procedures owing to favorable reimbursement criteria, higher success rates than other procedures.

Furthermore, various technological advancements and new product launches are the key growth-driving factors for this industry. Thus, rising R&D activities by key companies like Acclarent, Inc., and Smith & Nephew Plc. will have a major impact on market growth. For instance, in April 2018, Intersect ENT Inc. launched Sinuva for the treatment of polyp disease in adults who have undergone sinus surgery.

Another instance includes the launch of the Xpress LoProfile Multi-Sinus Dilation System. Launched in Europe in 2015, these surgical tools are equipped with a multi-functional system, which combines balloon dilation with irrigation, suction, and image guidance.

This growth was attributed to the increased prevalence of chronic sinusitis and the adoption of balloon sinuplasty procedures. Moreover, preference for these over traditional surgeries also contributed to the segment growth. The segment is projected to expand further over the next few years on account of advancements in surgical procedures.

Based on the application, the market has been divided into adult and pediatric patients. The adult segment held the maximum share of this market in 2017 as a result of a rise in the prevalence of sinusitis among adults. Also, growing healthcare expenditure levels coupled with rising awareness about the treatments of chronic rhinosinusitis will further boost the growth of this segment. According to a survey conducted by the Centers for Disease Controls and Prevention, viral sinusitis was more common among adults than it is in children, i.e. 9 out of 10 cases in adults were observed in the U.S.

Based on end-uses, the market is categorized into hospitals, ENT clinics/in office, and Ambulatory Surgical Centers (ASCs). The ENT clinics/in office segment is anticipated to be the fastest-growing segment over the coming years. On the other hand, the hospital segment will account for the maximum market share over the forecast period. 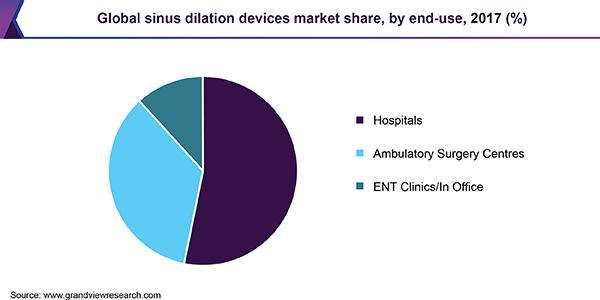 This growth can be attributed to the rise in the number of surgical procedures performed in these settings and the availability of favorable reimbursement policies. Rapidly improving infrastructure facilities and healthcare expenditure in developing countries, such as India, Mexico, Brazil, China, will further fuel the growth of the hospital segment. For instance, according to The World Bank data, in 2015, health expenditure as a share of total GDP was 8.4% for Brazil.

North America held the major share of the global sinus dilation devices market in 2017. It is estimated to expand further in the years to come. Efforts by key companies to expand product portfolio and ensure high-quality standards are expected to boost the demand for sinus dilation devices across the region. For instance, in July 2016, Acclarent, Inc. introduced a multi-sinus dilation system RELIEVE SCOUT, in the U.S. market.

However, Asia Pacific is anticipated to register the fastest CAGR during the forecast period. This is mainly due to the presence of a large patient pool. According to the study conducted by the Indian Council of Medical Research (2017), approximately 15% population of India was found to be affected by chronic sinusitis in 2016. Also, the rising adoption of technologically advanced products and minimally invasive procedures due to the penetration of the healthcare insurance system will drive the segment growth.

For instance, in April 2018, Intersect ENT, Inc., a U.S.-based company, launched a SINUVA sinus implant for the treatment of nasal polyp disease in adults. M&A is another popular market strategy among these pioneers. For instance, in April 2017, Olympus Corporation entered into a definitive contract to Acquire Image Stream Medical, Inc. to improve medical solution assistance to healthcare facilities.

This report forecasts revenue and volume growth at global, regional, and country levels and provides an analysis of the latest industry trends in each of the sub-segments from 2014 to 2025. For this study, Grand View Research has segmented the global sinus dilation devices market report based on product, procedure, application, end-use, and region:

What is the sinus dilation devices market growth?

b. North America dominated the sinus dilation devices market with a share of 33.4% in 2019. This is attributable to favorable reimbursement scenario, technological advancements, and new product launch.

Who are the key companies/players in sinus dilation devices market?

How big is the sinus dilation devices market?

What are the factors driving the sinus dilation devices market?

b. Key factors that are driving the market growth include growing adoption of MIS in developed, as well as developing, countries owing to the advantages associated with it, such as reduced blood loss and less recovery time and hospital stays.