The global small arms and light weapons (SALW) market size was valued over USD 18.70 billion in 2015. The increasing civilian interest in various sports such as shooting and self-defense are expected to boost market growth for small arms weapons. The rising incidents of armed violence and terrorism have led the civilians to procure weapons for self-defense purposes. Various law enforcement and military agencies have also invested heavily in the industry globally for acquiring advanced weapon systems which include pistols, rifles, and shotguns.

The government agencies in Asia Pacific and the Middle East implemented the Police Modernization Program and Soldier Modernization Program owing to a high number of terrorist incidents across the regions. Furthermore, the initiatives taken by countries such as Russia, the U.S., and France against terrorism is anticipated to result in increased demand. The increasing measures to curb the human right violations and drug trafficking has also contributed towards the small arms light weapon market growth. Mergers & acquisitions and strategic alliances among the manufacturers have contributed to the product development and growth.

However, stringent firearm legislation across various countries such as the U.S., China, and the European region is anticipated to hinder the SALW industry growth. These countries have restricted the personal utilization of weapons which include handguns, and pistols. They also made it mandatory to get the authorized permission for individual purposes. The new generation of weapons is considered to be more portable and lethal, and hence raises concern about uncontrolled proliferation.

The market has been categorized by type into small arms and light weapons. The small arms market is further segregated into pistols, rifles, revolvers, shotguns, and man-portable machine guns. Small arms are the weapons specifically designed for individual use. They are actually at the lower end of the caliber spectrum, i.e. 4.6 to 40 or 66 mm. The small arms weapons market is expected to grow at a CAGR of over 4.0% over the forecast period.

The light weapons segment accounted for over 55% of the overall revenue share in 2015. Light weapons are specifically designed for the use of two or three persons serving as a crew. They include landmines, mortars, grenades launchers, rocket launchers, rocket-propelled grenades, anti-tank weapons, and anti-aircrafts. The increasing need for lightweight, high precision, and compact weapons is anticipated to propel the demand for light weapons.

The pistols segment in small arms is expected to grow at a CAGR of 4.0% over the forecast period. Increased demand for highly robust, precise, and lightweight weapons are some of the factors expected to propel demand.

The application sectors analyzed in the report include military & defense and law enforcement. The military application segment accounted for over 50% of the overall market revenue share in 2015.

Growing cross-border stress between countries, political uncertainty, and the threat from several terrorist outfits have led to the growth of military applications across the Asia Pacific region. Increasing investments in the defense, Research & Development (R&D) for developing a highly robust, reliable, and durable system has led to the development of enhanced weapons. These enhanced capability weapons offer capable and sophisticated weapons to the military forces. 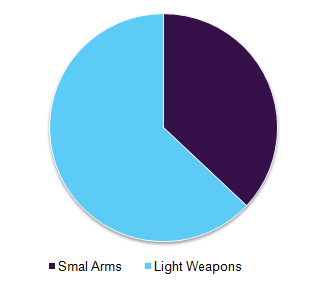 The law enforcement application segment accounted for over USD 4.50 billion in 2015 and is expected to grow at a CAGR of over 4.2 % over the forecast period. The increasing human rights violation and criminal activities globally have led to the development of law enforcement agencies. The government of countries such as China, Japan, and the U.S., are increasingly spending on the development of mobility, police force ordnance, and police force infrastructure

The North America SALW market accounted for over 30% of the overall revenue share in 2015 owing to significant technological and financial investments for military and law enforcement purposes. Technological developments for high precision weapons with a high target ratio for the enhancement of forces are projected to increase the demand across the region.

Asia Pacific is expected to witness significant growth at a CAGR of nearly 4% over the forecast period owing to increasing economic growth and technological improvements in countries such as China and India. Cross border-disputes, terrorist conflicts, and strategic interests are driving growth in the region. The rising awareness of civilians in shooting sports and investments of government for modernization of law enforcement and military forces is anticipated to contribute to market growth.

The Europe SALW market accounted for over 20% of the revenue share over the forecast period. Increasing threats from rebels and immigrants have led the country to increase investment in the market. The growing geographic presence of terrorist outfits across the region is also considered to be one of the factors contributing to the growth

This report forecasts revenue growth on the global, regional, and country levels and provides an analysis of the industry trends in each of the sub-segments from 2014 to 2024. For the purpose of this study, Grand View Research has segmented the global SALW market on the basis of type, application, and region: