The global small & medium caliber ammunition market size was valued at USD 9.18 billion in 2019 and is expected to grow at a compound annual growth rate (CAGR) of 4.2% from 2020 to 2027. Increasing geopolitical tensions and increasing military expenditure are expected to drive market growth over the forecast period. Commercially, the ammunition is available in the market through direct supply or third-party distributors. However, manufacturers can only sell their products to an entity with a federal license that can either be a retailer, wholesaler, or user. Moreover, strict laws and regulations are followed for the trade and different countries have their distinct legislations or the arms act to monitor the same. 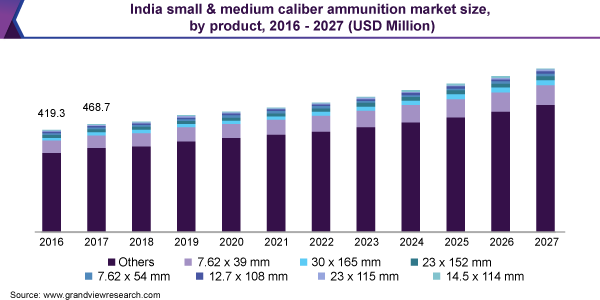 The market in India is expected to exhibit high growth over the projected period on account of armed forces development and the adoption of the latest technological weapons. Moreover, ongoing geopolitics with China coupled with the repetitive disputes with Pakistan forces over the borderline is expected to increase product procurement.

Rising defense expenditure and increasing focus of defense organizations on the improvement of their respective military combat operation with technological enhancements are expected to act as a catalyst for the market growth. Moreover, a rise in commercial hunting and sports activities is expected to aid market growth.

Various trends and product development phases are expected to spur the growth in product demand. High demand for the same has impelled the indigenous government to target and develop its local manufacturing, in terms of arms and ammunition. For instance, in 2018, the Bangladesh Ordnance factory developed BD-08 assault rifles that use 7.62×39 mm caliber ammunition for its armed forces.

7.62 x 39mm caliber led the market and accounted for more than a 12% share of the global revenue in 2019 on account of an increase in the utilization due to its compatibility in the AK-47 line of rifles. Moreover, these are quite affordable due to their high availability and user acceptance across all the regions. One of the major factors addressing its usage in the AK series lineup is the gun’s moderate coil and high-knockdown power. This product type is widely used in the military as well as by civil entities, especially for sports and hunting activities.

7.62 x 54mm ammunition is one of the prominent choices of the users owing to its active consumption in military use. It is one of the rimmed rifle cartridges that are widely used by the Russian military in the Dragunov, SV-98, and other sniper rifles. Moreover, it is widely used in countries, such as India, Egypt, and Algeria, owing to its applications in general-purpose machine guns, such as Pecheneg and PKM machine guns. 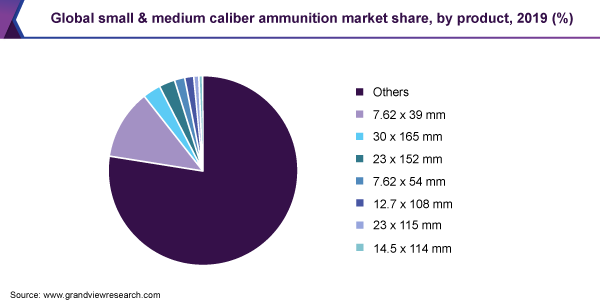 30 mm caliber ammunition is an autocannon type that is generally used against armed vehicles, especially aircraft and fortified bunkers, as a result, the same is known as armor-piercing or anti-material round ammunition. The product is used in a variety of close-in weapon systems, such as the Dutch Goalkeeper CIWS and the Russian AK-630.

The increase in arms import and government involvement for higher arms purchases in the region, especially in countries such as Algeria, Egypt, and Kuwait, to tackle terrorism and border disputes are anticipated to propel the growth. The market in Central & South America is expected to grow at a significant rate over the forecast period on account of the high number of gun-related crimes, especially in Brazil, owing to the societal norms and relaxed law regulations. The countries, such as Brazil, Peru, and Chile, import the majority of the ammunition for civilians and the military from the U.S., and the trend is expected to continue over the forecast period.

The market has been witnessing an increasing trend of product development through expansion, mergers & acquisitions. The companies are trying to increase their sales through acquisition, investment, and innovation. The industry is highly competitive due to the existence of major manufacturing companies, most of which are engaged in gaining contracts from leading defense forces and large industries that supply arms and ammunition on the basis of a federal license and viable distribution network. Some prominent players in the global small & medium caliber ammunition market include:

This report forecasts revenue growth at global, regional, and country levels and provides an analysis of the latest industry trends in each of the sub-segments from 2016 to 2027. For the purpose of this study, Grand View Research has segmented the global small & medium caliber ammunition market report on the basis of product and region:

How big is the small & medium caliber ammunition market?

What is the small & medium caliber ammunition market growth?

b. Asia-Pacific dominated the market and accounted for over 67% share of revenue in 2019, owing to increasing geopolitical tension and terrorist activities in the region.

Who are the key players in the small & medium caliber ammunition market?

What are the factors driving the small & medium caliber ammunition market?