The global smokeless cigarettes market size was valued at USD 24.5 billion in 2021 and is expected to expand at a compound annual growth rate (CAGR) of 16.0% from 2022 to 2030. Growing consumer awareness about degenerating effect of tobacco consumption is expected to drive the market in the forecast period. According to the Centers for Disease Control and Prevention, 2020, more than 2 in every 100 (2.3%) adults aged 18 or older reported current use of smokeless tobacco products in the U.S. i.e. 5.7 million adults in the country. Furthermore, technological advancements by key players in the market for smokeless cigarettes would also promote expansion. 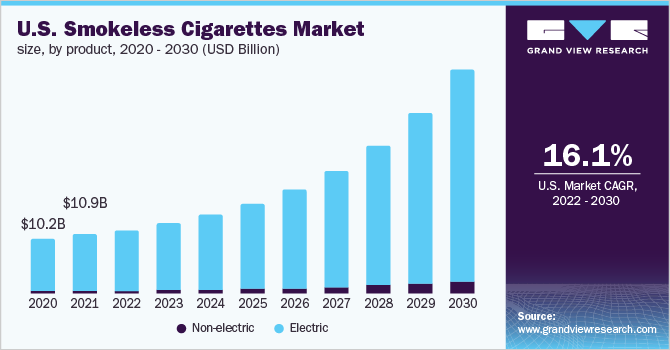 Amid the COVID-19 pandemic, e-cigarettes and vape vendors have adopted several COVID-19-based marketing strategies to increase product sales. The key players in the market for smokeless cigarettes started offering these products online through various e-commerce websites such as Amazon. According to an article published by American Medical Association, in December 2020, online retail for disposable e-cigarettes was 18.2%, pod-based was 19.6%, and other e-cigarettes was 19.8%. Furthermore, an increased offering by companies such as Podsalt, BLVK, and One Drop Vape with hand sanitizers and face masks as gifts to purchasers of smokeless cigarettes to prevent the spread of COVID-19 has helped key players to establish themselves in the market.

Shifting consumer preference toward nicotine-free cigarettes owing to the risk of cancer of the head, throat, neck, esophagus, and oral cavity is expected to drive the market for smokeless cigarettes. Hence, manufacturers are launching innovative products to cater to such issues. For instance, in January 2019, Juul Labs Inc, a U.S.-based electronic cigarette company launched e-cigarettes in India. The initiative was taken in response to expanding the company’s market presence in the Asia-Pacific region. Similarly, in February 2021, TAAT(TM) Lifestyle and Wellness Ltd. launched TAAT, a nicotine-free and tobacco-free cigarette, which will be available in Ohio, on various e-commerce websites.

The growing inclination of consumers towards different flavored products such as cinnamon, berry, vanilla, saffron, and apple would provide a lucrative opportunity for the players operating in the market. For instance, in July 2021, BIDI Stick, a disposable e-cigarette brand unveiled new flavor names as direct translations from its previous flavors such as Marigold, (formerly Icy Mango), Arctic (formerly Mint Freeze), and Solar (formerly Berry Blast), among others. The approach was designed to subvert future restrictions on the sale of flavored disposable e-cigarettes that were not in accordance with government policy and modify its existing product characteristics.

Rising awareness among consumers especially millennials and Gen Z regarding the health hazards associated with smoking has resulted in high demand for alternatives to traditional cigarettes, such as e-cigarettes, which will adapt well to market growth. According to an article published in Truth Initiative, in July 2021, the use of disposable e-cigarettes increased about 1,000% (from 2.4% to 26.5%) among high school e-cigarette users and more than 400% (from 3% to 15.2%) among middle school e-cigarette users during 2019-2020. Such data provided by various official websites suggest a positive growth trend for the market.

However, local government controls on the sale of vaping products and e-liquids in nations such as the United States and India have stifled market growth. Furthermore, strict trading rules have made importing vaping devices for personal use impossible for retail users. Regulations on traditional cigarettes, on the other hand, are expected to recognize e-cigarettes as a healthy alternative to tobacco consumption, consequently regulating the technology for safe distribution and use. In addition, the vaping business has formed several associations to combat anti-vaping regulations and to regulate the industry for oversight, resulting in the rise of the e-cigarette and vaping markets.

The electric segment held the larger revenue share of 81.2% in 2021 and is expected to maintain dominance over the forecast period. Increasing consumer adoption of convenient smoking coupled with the availability of low-cost products is expected to accelerate market growth. According to an article published by World Health Organization, in December 2020, the use of smokeless cigarettes among young consumers increased from 9.1% in 2011 to 18% in 2019, in Latvia. Moreover, the ease of use of these devices has increased customer acceptance, which is likely to bode well with the growth of the market for smokeless cigarettes during the projection period.

However, the non-electric segment is projected to register faster growth during the forecast period with a CAGR of 17.3% from 2022 to 2030. The rising awareness about e-cigarettes being safer than traditional cigarettes, especially among the younger population, is anticipated to further drive the market for smokeless cigarettes. According to an article published by U.S. Food and Drug Administration, in March 2022, approximately 39.4% of youth in the U.S. use e-cigarettes compared with 18.9% for cigarettes.

The offline segment accounted for the largest revenue share of 79.6% in 2021. The availability of smokeless cigarettes in various stores, supermarkets, and other retail stores is the primary factor for its large value generation in the year 2021. For instance, Family Dollar, a U.S.-based store chain sells Mistic e-cigarette products, including starter kits, individual vaporizers or vape pens, flavor blends, and cartridges containing various liquid mixtures. Furthermore, e-cigarette store allows customers to try out and test these devices before making a purchase decision, which is expected to drive the segment over the forecast period. 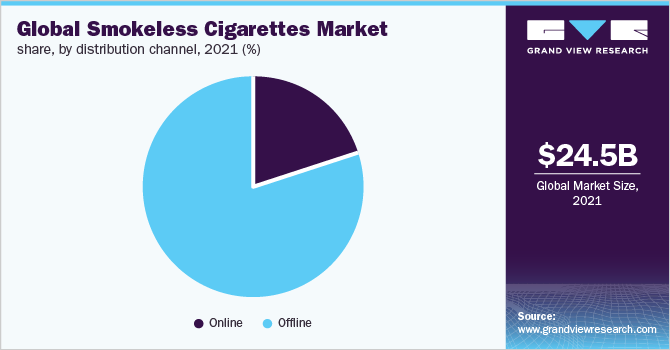 However, the online segment is projected to register the fastest CAGR of 18.0% from 2022 to 2030. The benefits of online marketplaces in terms of competitive pricing, convenience, and access to a wider variety of products encourage people to purchase e-cigarettes online. Availability of these devices online in regions including North America, Europe, and the Asia Pacific will drive the market for smokeless cigarettes. For instance, Breather Supreme Herbal offers tobacco and nicotine-free cigarettes through e-commerce giant Amazon in countries including India, the U.S., and others.

North America accounted for the maximum revenue share of 47.9% in 2021 owing to the social media presence of major players used for selling e-cigarettes and vaping products such as JUUL Labs Inc. With young people increasingly turning to smokeless cigarettes as a safer alternative to tobacco, the product is expected to gain popularity in the region. However, the current ban on some e-cigarette flavors, via various distribution channels, in the U.S. is expected to stifle market growth to some extent. For instance, in September 2020, U.S. Food and Drug Administration announced a ban on the sale of flavored vapes on online platforms.

The market for smokeless cigarettes is fragmented with the presence of many global and regional players. These players are engaging in the major acquisition of consumers and promotional activities to increase their customer base and brand loyalty. Some of the initiatives are:

Some of the prominent players in the smokeless cigarettes market include:

This report forecasts revenue growth at global, regional, and country levels and provides an analysis of the latest industry trends in each of the sub-segments from 2017 to 2030. For this study, Grand View Research has segmented the global smokeless cigarettes market report based on product, distribution channel, and region:

How big is the smokeless cigarettes market?

What is the smokeless cigarettes market growth?

Which segment accounted for the largest smokeless cigarettes market share?

Who are the key players in the smokeless cigarettes market?

What are the factors driving the smokeless cigarettes market?