The global sodium chlorite market size was estimated at USD 152.5 million in 2016. High demand for the chemical in wastewater treatment and water purification applications owing to its biocidal and antimicrobial properties is expected to fuel the demand for sodium chlorite over the forecast period. 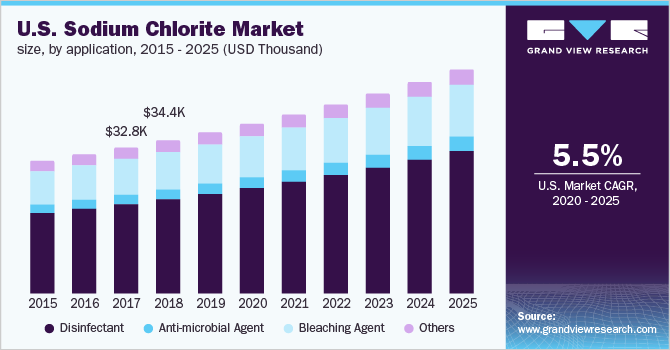 The industry has the presence of a large number of small and medium-scale manufacturers, which are primarily located in China. Sodium chlorite prices vary across the commercial grades with 80% concentrated being the highest consumed grade amongst all. Raw material and operational and transportation costs are the key factors defining the final value of the products.

OxyChem is the only domestic manufacturer for sodium chlorite in the U.S. The country imports sodium chlorite primarily from China in order to meet the undersupply. Stringent regulations by the governments of various U.S. states and environmental protection agencies limit the production and consumption of the chemical in this region.

The industry is highly competitive in terms of pricing, as cost is a key factor influencing the buyer’s decision. The product prices are relatively low in Asia Pacific, especially in China, owing to low raw material and labor costs along with the presence of numerous manufacturers in the region.

The industry has very few major manufacturers, which are established globally. However, the presence of several, and medium scale manufacturers in Asia Pacific is expected to be a key barrier for new entrants. However, the scope of the product in niche segments, including the metal processing and electronics industry, is expected to open new avenues for upcoming players.

The chemical has to adhere to various regulations given by FDA, Resource Conservation and Recovery Act (RCRA), Federal Water Pollution Control Act (FWPCA), and OSHA. The presence of a large number of stringent government regulations in the developed economies is expected to hamper the growth over the forecast period.

Rising demand for antimicrobial agents in the food processing industry to improve the shelf life of packaged products is expected to have a positive impact on industry growth. An acidic form of the chemical does not hamper the nutritional quality of food thereby driving its application in food & beverage applications.

The demand for the chemical as a bleaching agent is expected to grow at a CAGR of 4.6% from 2017 to 2025, owing to its superior oxidizing properties. The product is used for both cotton and synthetic fabrics as it does not affect the quality of the fabric. The aforementioned factors are likely to propel demand in textile applications over the forecast period.

The chemical is also used as a healing agent and insecticide in the medical and pest control manufacturing industries. The product in combination with zinc chloride is used as a component in mouthwashes, toothpaste, gels, and sprays. The rising demand for the product as a preservative in the manufacturing of nasal and eye drops is expected to drive the market.

The presence of sodium hydroxide in the chemical increases the pH levels of water thereby enabling its application as a disinfectant. It is diluted with water and used for disinfection purposes in operation theatres, intensive care units, water treatment plants, and swimming pools. The aforementioned factors are thus expected to drive industry growth.

The chemical finds a wide range of application scope in water treatment, pulp & paper, textiles, electronics, food processing, and fertilizer. The growing demand for the chemical to generate chlorine dioxide at pulp processing and textile bleaching plants is expected to drive the industry growth over the next eight years. 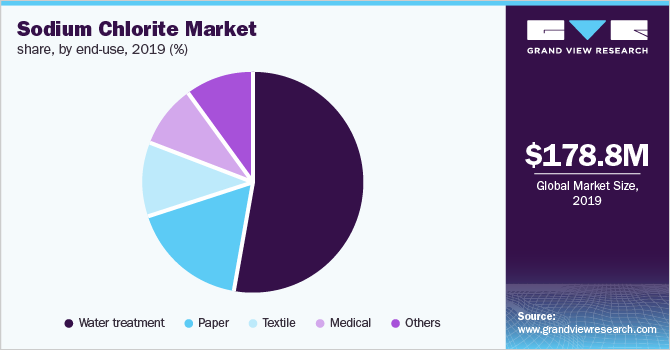 The demand for the product in the paper industry stood for USD 242 million in 2016 and is expected to grow at a CAGR of 6.9% from 2017 to 2025. Sodium chlorite is used for on-site production of chlorine dioxide, which is further used as a bleaching agent in paper and straw production. Furthermore, rising demand for the product in the paper recycling process is likely to propel growth.

The product is used as a disinfectant for sanitizing operation theatres, intensive care units, and hospital rooms. Sodium chlorite is used to treat malaria, hepatitis, tuberculosis, arthritis, and HIV/AIDS in the medical industry. In addition, the chemical is used to treat common ailments including cold and chronic fatigue, thus propelling its demand in medical application.

The chemical finds application in the food & beverage, pesticides, electronics, and metal processing industries. In the food and beverage industry it is used as bleaching, and antimicrobial agents. However, stringent regulations associated with the quantities of the chemical used in food items, owing to its toxic nature are expected to hamper product demand.

The consumption of the chemical in Europe is very high as compared to domestic production. The demand in the region was USD 30.85 million in 2016, which was primarily met through the imports from Asian manufacturers. China has been a key sodium chlorite supplier in the region, and this trend is expected to continue over the forecast period.

The availability of land, low raw material, and labor cost along with the favorable government outlook are the key factors associated with high production volumes of sodium chlorite in China. Numerous small-scale and medium-scale manufacturers in China contribute to the production volumes offered by the country in the domestic as well international market.

The Middle East and Africa rely on imports for the chemical owing to the lack of raw material availability and production units in the region. However, increasing foreign investments in the manufacturing sectors in these regions are expected to have a positive impact on industry growth over the projected period.

The industry players are concentrated in Asia Pacific region owing to the ease of raw material availability, favorable government scenario, and high-end- use demand. The companies in this region face high competitive rivalry as the market players offer their products at competitive pricing. Geographical reach is an important parameter for the players, which helps them strengthen their presence in the market.

Commercially, it is available in liquid and solid grades. Pricing and quality are the key parameters for the market, which influence the decision of buyers. Low material pricing offered by the manufacturers in China in the domestic, as well as international markets, offers them a competitive edge over the other players.

OxyChem, Dupont and American Elements are the key major players involved in the manufacturing of sodium chlorite in North America. The strong foothold of these players in the market as well as their established consumer base is a key factor that offers these companies a competitive edge over other market players.

This report forecasts revenue growth at global, regional & country levels and provides an analysis of the industry trends in each of the sub-segments from 2012 to 2025. For the purpose of this study, Grand View Research has segmented the global sodium chlorite market on the basis of application, end-use, and region:

How big is the sodium chlorite market?

What is the sodium chlorite market growth?

Which segment accounted for the largest sodium chlorite market share?

b. Asia Pacific dominated the sodium chlorite market with a share of 39.7% in 2019. This is attributable to rising pulp & paper industry in the region.

Who are the key players in sodium chlorite market?

b. Some key players operating in the sodium chlorite market include OxyChem, Dupont, and American Elements.

What are the factors driving the sodium chlorite market?

b. Key factors that are driving the market growth include high demand for the chemical in wastewater treatment and water purification applications owing to its biocidal & antimicrobial properties .