The global sodium lactate market size was valued at USD 259.5 million in 2021 and is anticipated to expand at a compound annual growth rate (CAGR) of 8.0% from 2022 to 2030. The demand for the product is anticipated to be driven by the increasing application of sodium lactate as an API in IV fluids and the dialysis of chronic kidney diseases like CAPD. The market is characterized by the presence of multiple large manufacturing companies around the world. Corbion, Henan Jindan Lactic Acid Technology Co., Ltd., Foodchem International Corporation, Jungbunzlauer Suisse AG are some of the prominent market players. These companies undertake various operations and strategic initiatives such as mergers, acquisitions, partnerships, agreements, and collaborations to establish their presence in existing and new markets. 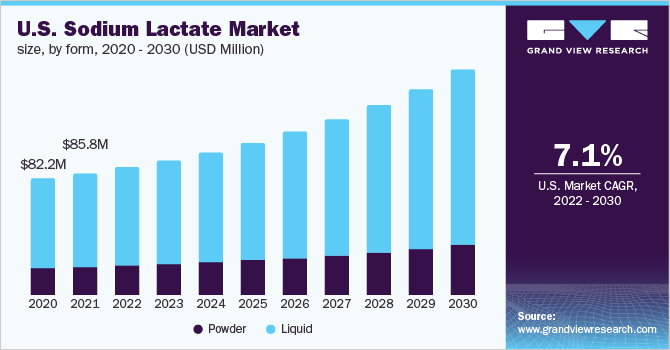 Sodium lactate is lactic acid’s sodium salt, which is obtained by the process of neutralization of naturally derived substances, which have a high purity sodium source. The production process of sodium lactate is carried out naturally by living organisms and is obtained as a by-product of glycolysis. It is a colorless to yellowish substance, which is nearly odorless and has a mild salty taste.

These products have wide usage in various industries such as food & beverages, cosmetics, personal care, as well as pharmaceutical. It finds its largest application in the cosmetics industry as a pH regulator and moisturizer in various skin care products. Apart from the cosmetics industry, the product is adopted by the food & beverages industry as well. It is being used as a natural food additive, and as a preservative in various food items, especially seafood and meat products.

Increasing global spending on the healthcare and pharmaceutical industry, especially after the global pandemic has created a great demand for the products that are extensively used in the pharma industry. Sodium lactate is as an over the counter (OTC) medicine. In addition, it is also used as a pH regulator to relieve acidosis. Various such factors are responsible for the market growth. Apart from this, it is also used in injections, as a nonpyrogenic, sterile, and a concentrated solution, generally in water. It is also used as an additive after the dilution by intravenous route as a systematic alkalizer and also as an electrolyte replenisher.

Liquid form dominated the market with a revenue share of more than 75.7% in 2021. This high share is attributed to the growing demand for liquid sodium lactate from the pharmaceutical industry. It is used in IV solutions and the dialysis of chronic kidney diseases (CKD).

Sodium lactate is originally produced in the liquid form itself. It is significantly used in the manufacturing of soaps, lotions, and shampoo, as it provides soft oiliness and also acts as a good moisturizer. The usage of sodium lactate is safe for the human skin as it complies with numerous regulations set by regulatory authorities, and the governments of multiple countries.

The cosmetics application dominated the sodium lactate application with a high revenue share of 33.9% in 2021. Its high share is attributable to the rising demand for cosmetics and personal care products. The growth of the overall industry is due to the rising awareness regarding personal hygiene, increasing disposable income, urbanization, and increasing standard of living. 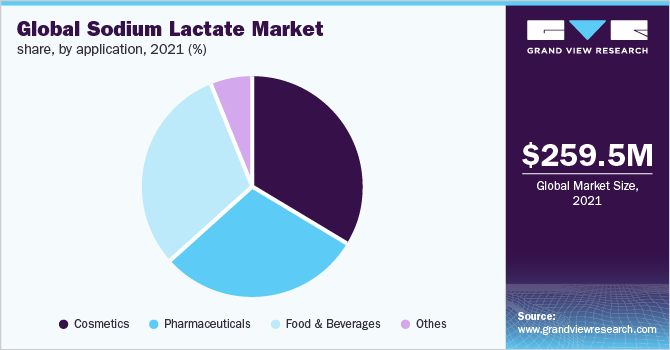 The food & beverages industry emerged as one of the prominent application industries due to its wide usage in various food items and multiple beverages. Owing to the cushioning effect, sodium lactate is used to stabilize the food item. Additionally, it is also used as a seasoning product to improve the flavors of the food items, especially meat products like pork, chicken, beef, and a few seafood items.

The product is used as a safe preservative due to its buffering properties, and its high-water holding capacity. Apart from its usage in food industry, the product is also used in beverages like ready-to-drink tea and coffee, carbonated soft drinks, alcoholic beverages, and syrups.

There has been an increase in the number of multiple chronic and mild diseases in recent years. Due to the COVID-19 pandemic, the importance of the pharmaceutical industry grew. This led to the increasing demand for the products used in the industry. Sodium lactate is used in IV fluids as it acts as an alkalizing agent or an electrolyte.

North America dominated the global sodium lactate market with a high revenue share of nearly 36.72% in 2021. This dominance is attributed to the rising demand from the pharmaceutical industry in the region. The North American region has one of the best healthcare and pharmaceutical industries globally. Furthermore, the use of sodium lactate in the region is accepted by many regulatory authorities like Health Canada, US FDA, and is also in line with CODEX Alimentarius “International Food Standard”.

The European market is expected to progress on the account of the presence of various leading manufacturers such as Corbion, Jungbunzlauer Suisse AG, and Dr. Paul Lohmann GmbH & Co., KGaA. Europe is the hub for the personal care and cosmetics industry. Due to this factor, the demand for these industries from the region is increasing. As the product finds its application in the above-mentioned industries, the demand for the product is anticipated to rise.

The Asia Pacific region is poised to increase on the account of increasing demand from the end-use industries like pharmaceuticals, cosmetics, and especially food & beverages. Countries like China and India are expected to show a significant growth rate in the future. In addition, the Japanese market is expected to grow on the account of the presence of a number of manufacturers.

The competition in the market is characterized based on the number of manufacturers, their product portfolio, and their geographical spread. In addition, the competition in the market is based on the strategic initiatives that the companies undertake to strengthen their presence in the market. For instance, in the year 2019, Corbion, a key manufacturer, signed an agreement with Brenntag under which Brenntag agreed to distribute Corbion’s numerous products in the Middle East and European markets.

These prominent manufacturers have undertaken various operational and strategic decision s to establish their hold in the market. Many of the companies have integrated themselves backward so as to procure quality raw materials. Some of the prominent players in the global sodium lactate market include:

This report forecasts revenue growth at global, regional, and country levels and provides an analysis on the latest industry trends in each of the sub-segments from 2018 to 2030. For this study, Grand View Research has segmented the global sodium lactate market report based on form, application, and region:

How big is the sodium lactate market?

What is the sodium lactate market growth?

Which segment accounted for the largest sodium lactate market share?

b. North America dominated the sodium lactate market with a share of 36.7% in 2021. This is attributable to growing demand for liquid sodium lactate in pharmaceutical industry especially in the U.S.

Who are the key players in sodium lactate market?

What are the factors driving the sodium lactate market?

b. Key factors that are driving the sodium lactate market growth include rising demand for products from several end-use industries such as Cosmetics, Pharmaceutical, and Food & Beverages, among others.