The global sodium sulfur battery market size was valued at USD 60.19 million in 2019 and is expected to grow at a compound annual growth rate (CAGR) of 29.6% from 2020 to 2027. Growing demand for energy storage and power using sodium sulfur (NaS) batteries across the globe is projected to boost the growth of the market during the projected timeframe. Besides, as sodium sulfur batteries are smaller in size, they are more appropriate for areas where other energy storage choices are not viable. Sodium sulfur batteries allow deferral of transmission up-gradation as the power does not have to be transmitted directly after generation, hence it can also be discharged on demand. Moreover, sodium sulfur batteries are used for the steadying of emergency power supply and power supply for micro/off-grid and industrial customers. However, the adoption rate is a little low owing to the presence of alternative battery technologies, including Li-ion and lead-acid batteries. 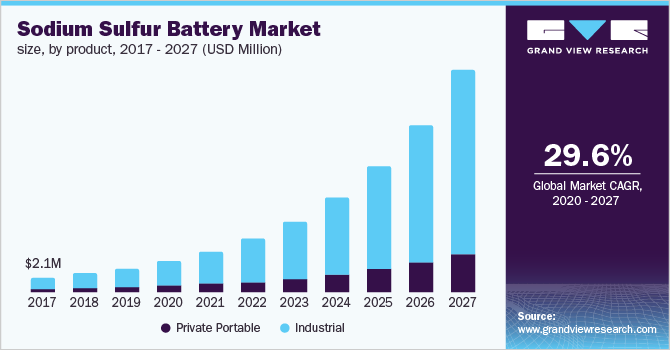 The U.S. market size was valued at USD 3.82 million in 2019. The U.S. government has been cheering stakeholders for the renewable industry, resulting in improved demand for Battery Energy Storage Systems (BESS), mainly led by sodium sulfur batteries. Encouraging industrial sector growth, along with energies to sustain grid stability with the integration of renewable sources of energy, will further propel the industry statistics across the country.

The threat of moisture is more important for NaS batteries, which is giving rise to regular servicing of the batteries as well as individual cell inspection so as to guarantee better operation for a longer period of time. Periodic inspection and maintenance, sealing costs, installation in inaccessible locations, and regulations on distributed energy storage (DES) are some of the factors limiting the growth of the global market.

On the basis of the product, the market is segregated as private portable and industrial batteries. The industrial product segment accounted for 81.8% share of the total revenue in 2019 owing to the growing demand for sodium sulfur batteries in industrial and grid storage locations as they offer high-energy density solutions. Hence, the demand for sodium sulfur batteries across the industrial sectors is likely to upsurge with the intensifying need for storage and power backup. 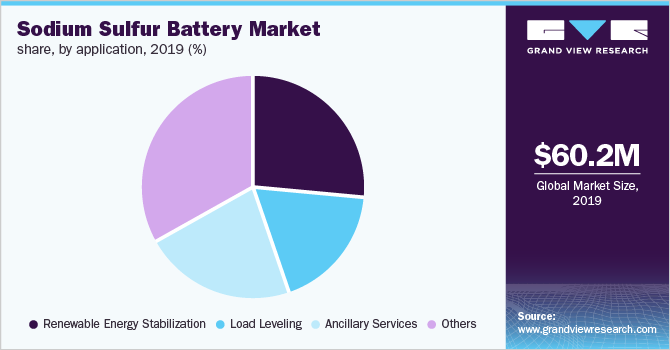 Europe is likely to witness noteworthy growth in the years to come on account of increasing demand for NaS batteries. Technological advancements in terms of cost-effectiveness, enhanced efficiency, and product innovation are projected to boost regional market growth. Stringent emission norms by the governments of developed countries, such as the U.K. and the U.S., coupled with rising attention towards fuel efficiency, are projected to drive the market.

The market for sodium sulfur batteries has been characterized by high competition owing to the presence of major companies. Business expansion has emerged as the main focus area for the market participants. Market players are increasingly targeting the developing countries to tap the rising demand for NaS batteries. Moreover, market players are investing in product development to consolidate and enhance their market share across the industry. For instance, in 2019, NGK and BASF announced the expansion of their existing partnership to a joint development agreement (JDA) to develop next-generation sodium sulfur batteries. Some of the prominent players in the sodium sulfur battery market include:

This report forecasts revenue growth at the global, regional, and country levels and provides an analysis of the latest industry trends and opportunities in each of the sub-segments from 2016 to 2027. For the purpose of this study, Grand View Research has segmented the global sodium sulfur battery market report on the basis of application, product, and region: