Numerous policies and incentives offered by various governments to support the use of solar systems are expected to open new avenues for the industry over the forecast period. Stringent governmental regulations to limit environmental impact are expected to propel the use of renewable energy sources which is expected to have a positive impact over the next seven years. Tax benefits, subsidy, net metering, financial assistance, low import duty and feed in tariff are among several schemes announced by respective governments to encourage industry growth. 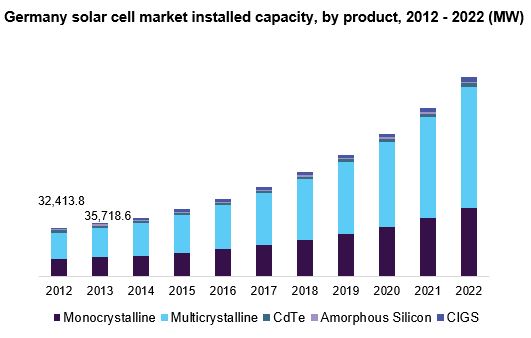 Solar cell market is expected to witness significant growth over the forecast period owing to rising demand for PV systems for commercial, residential and utility applications. The industry is characterized by integration across the value chain by various companies including SunEdison, First Solar, and SolarWorld.

Rising demand for decentralized energy generation systems in developing nations will augment the penetration of solar energy in future. Over 1 billion of global population have zero or poor access to electricity. Initiatives towards off-grid electrification integrated with solar PV systems will boost the product demand in the near term.

Global silicon wafer demand was over 170.0 GW in 2014 and is expected to witness significant growth over the forecast period. Silicon wafer dominates overall market owing to abundant raw material availability coupled with high efficiencies offered as compared to other technologies. However, declining silicon production across the globe has led to raw material shortage which is expected to hamper growth over the forecast period. 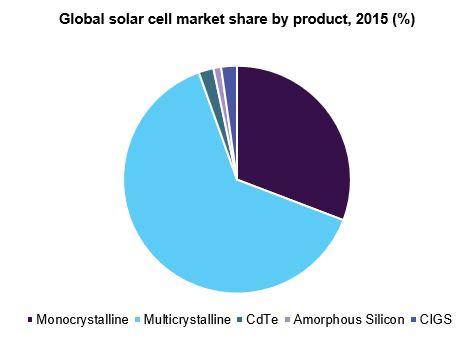 Multicrystalline silicon cells are expected to witness the fastest growth of over 25.0% from 2015 to 2022. Technological simplicity related to production process leading to lower product cost compared to its counterparts is expected to propel market growth. Furthermore, increasing demand for these cells in residential and commercial applications owing to lower initial investments as well as superior efficiency is expected to increase demand over the forecast period.

Thin film market accounted for over 10 GW in 2014. Thin film market is segmented by raw material including CdTe, amorphous silica, and CIGS. Growing demand for a thin film for residential and commercial applications is expected to have a positive impact on market growth. Incorporation of CIGS in construction materials such as cement conceivably makes the complete structure act as a power generation unit. Furthermore, flexibility and transparency associated with these products are expected to drive demand over the forecast period.

Europe solar cell demand was over 45% of global installed capacity in 2014. The presence of favorable government policies and incentives associated with PV installations is expected to augment growth over the forecast period. Growing demand for these cells in commercial and utility sector is expected to drive the market. Decreasing PV prices is expected to open new avenues for crystalline silicon modules over the forecast period. Furthermore, technological advancements related to improving operating efficiency of thin film solar cells is expected to increase its demand in residential and commercial applications.

North America solar cell demand was estimated over 20 GW in 2014. An increasing number of PV installations on account of rising consumer awareness towards cost benefits associated with these energy systems in this region is expected to have a positive impact on the market. However, lack of incentives and federal subsidy post 2016 is expected to witness reduced installation from residential and commercial segments which are expected to hamper growth.

The market is integrated across various stages of the value chain particularly from raw material to module manufacturing. Companies operating independently cater to end-users either through distribution channels or their supply outlets (distribution/sales centers). In such cases, distributors act as a bridge between companies and end-users, by providing aftermarket services, technology assistance, and logistics.

This report forecasts revenue and revenue growth at global, regional & country levels and provides an analysis on the industry trends in each of the sub-segments from 2014 to 2025. For this study, Grand View Research has segmented the global drilling fluids market on the basis of product, end-use, and region.