The global sputtering equipment cathode market size was estimated at USD 840.3 million in 2017 and is expected to exhibit a CAGR of 4.9% from 2018 to 2025. Increasing the application of sputter coatings in the growing semiconductor industry is expected to be one of the primary factors driving the demand in the forthcoming years. 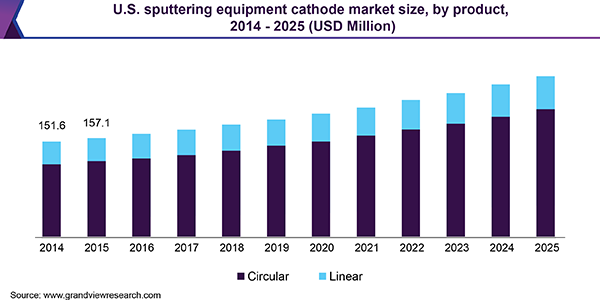 The advent of Artificial Intelligence (AI) across a wide range of industries, such as electronics and aerospace is likely to spur the demand for semiconductors, resulting in the growth of the market. Increasing the use of semiconductors to implement virtual reality in gaming is expected to further drive the growth.

The introduction of confocal sputtering arrangement in magnetron sputtering technology is anticipated to boost the efficiency of the equipment. Moreover, it enables the incorporation of multiple magnetrons with different cathode materials. These factors are expected to boost the production output of the sputtering equipment, thereby driving the growth of the market.

High requirement for industry-specific knowledge and technical know-how for the companies operating in the sputtering equipment cathode market results in a high entry cost which reduces the threat of new entrants. Also, the fragmented presence of localized manufacturers across the regions with high production capability lead high competitive environment in the industry.

Increased number of initiatives by key industry participants such as continuous investments in R&D to develop novel manufacturing processes is expected to enhance the volume throughput of the process. Moreover, new product development and technological advancements in the sputtering process are expected to further boost the growth soon.

The companies are implementing several innovative strategies such as development proprietary cathode technologies and materials to differentiate their products from the competitors and to gain competitive advantage. Also, the key players are investing in the development of products to resolve changes, such as uniformity, homogeneity, and purity.

Circular cathode accounts for the majority share of the industry as they can be used for coating substrates with intricate designs through the surface of the rotating target tube. This segmented accounted for USD 636.9 billion in 2017 and is expected to witness notable growth as the product provides enhanced arc rates, high power density, and has a low initial cost.

The segment is also expected to witness growth due to an increase in the use of advanced target materials such as silicon nitride, silicon dioxide, titanium dioxide, and niobium pentoxide. Also, the circular cathode is primarily used in coating temperature-sensitive materials, which in turn is expected to drive the market growth over the forecast period.

The linear cathode is primarily used in large scale sputtering systems and offers high deposition rates for physical vapor depositions coatings. It provides high production throughput on large substrates and also be seamlessly integrated into larger clusters of production tools to attain higher uniformity. This is expected to drive the product demand.

The linear cathode can withstand plasma at low gas pressure that requires special adjustments to achieve desired film properties. Also, the use of linear magnetron cathode results in higher deposition rates than the simple diode configuration cathode which results in a heightened demand. 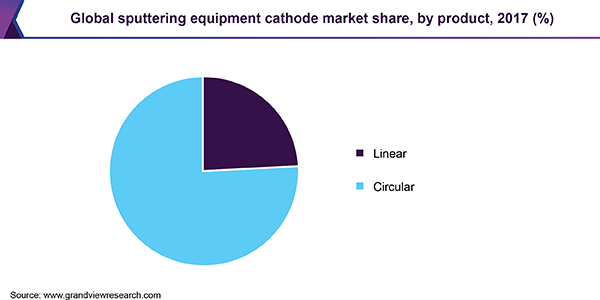 Sputter deposition is also used in several applications, such as architectural and anti-reflective coatings, display web coatings, and automotive and decorative coating. Also, it is used for computer hard disk production and integrated circuit technology among other applications. Rising demand from these end-use applications is expected to spur the growth over the forecast period.

Variation in coating efficiency and fluctuations in price are expected to adversely affect the market. However, key companies are involved in the launch of new products, such as specialized DC power-based Physical Vapor Deposition (PVD) process used for semi-conductor and metal manufacturing processes, which in turn is expected to positively impact the market growth.

China is expected to exhibit the highest automotive production during the forecast period, which is projected to benefit the market as the industry utilizes numerous components coated using sputtering equipment. Also, growth in the production of hybrid/electric and green vehicles is expected to positively impact the regional market in the forthcoming years.

Europe is expected to witness a surge in demand over the forecast period owing to the immense demand for PVD coatings across various sectors, such as surgical tools and medical equipment. Besides, it is also replacing traditional coating methods, owing to the ban on chromium by European Commission, thereby driving the market growth.

The market is competitive, owing to the presence of a large number of localized manufacturing companies. A large number of players in the industry are technology-driven and are targeting markets with long-term growth potential, where they can establish a sustainable competitive advantage.

This report forecasts revenue growth at global, regional, and country levels and provides an analysis of the latest industry trends in each of the sub-segments from 2014 to 2025. For this study, Grand View Research has segmented the global sputtering equipment cathode market report based on product and region:

How big is the sputtering equipment cathode market?

What is the sputtering equipment cathode market growth?

b. Asia Pacific dominated the sputtering equipment cathode market with a share of 46.5% in 2019. This can be attributed to the increasing semi-conductor production in China, India, South Korea, and Taiwan.

Who are the key players in sputtering equipment cathode market?

What are the factors driving the sputtering equipment cathode market?