The global virtual reality in gaming market size was valued at USD 11.56 billion in 2019 and is expected to grow at a compound annual growth rate (CAGR) of 30.2% from 2020 to 2027. VR has enhanced the gaming experience by offering a real-time ability to take gamers into their screens. The industry delivers gamers with alluring virtual accessories that improve user engagement along with an immersive involvement. Incessant upgradations in the prevailing technologies comprising motion tracking, 3D effects, and interactive graphics for drawing players’ attention is expected to drive the industry growth. Users are demanding newfangled sources of entertainment due to the surge in their spending capacity and are hence, seen to be engaging in virtual reality games. 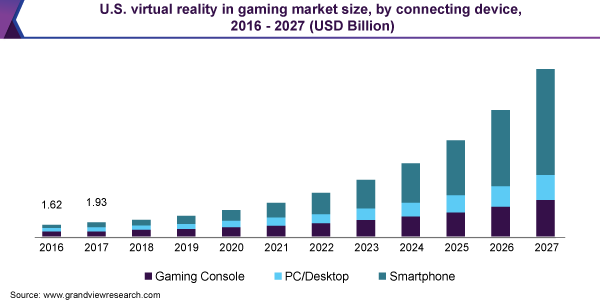 The virtual reality gaming space is expanding its professional value with the assistance of new innovations. Awareness of state-of-the-art VR accessories, such as headsets, bodysuits, and gloves, is rapidly growing amongst players. VR headsets that were commercially launched in 2016 were a revolution in the recreation industry. The launch resulted in an upsurge in demand for virtual reality games as users were eager to encounter the 3D characters in their virtual surroundings. VR gadgets utilized in the market are empowered with intelligent interactive hardware and software, augmenting the entertainment experience for users.

The rapid advancement in the development of virtual reality peripherals that will be reinforced by the compatible desktops and game consoles is likely to drive the industry growth. With several startups venturing the virtual reality in gaming space, the industry for wearable components such as the Head-Mounted Displays (HMDs), bodysuits, motion trackers, gloves, among others is probable to witness a surging demand by the gaming enthusiasts. The devices are launched in a phased manner initially in a few countries. For instance, HTC Vive has been initially made commercially available in only 24 countries.

Investors and entrepreneurs have been showing singular interest in the virtual reality space for the past five years. The considerable investments in immersive technology across tech-based companies are notifying the coming trend in the entertainment and computing business. According to NASSCOM, in the last five years, content creation tools have received 43.5% of the total funding for VR. This indicates the augmented need to ensure superior content development to maintain the interest, demand, and supply of immersive experiences through virtual reality.

Companies are continually engaged in R&D activities to launch technologically advanced products and gain an edge over their competitors. The virtual reality in gaming market players are manufacturing accessories extending from motion-sensing device to treadmills, gloves, arms, and even full bodysuits. For instance, in July 2019, Teslasuit launched its full-body VR haptic suit, which delivers a hyper-accurate illustration of sensations and captures biometrics. The growing demand for VR accessories and wearables amongst users and their probable price fall in the coming seven years is anticipated to drive the market growth. Nevertheless, device compatibility limitations are a challenge that poses a barrier to the industry’s growth.

The gaming console segment accounted for the largest revenue share of over 35% in 2019 and is expected to witness a significant CAGR from 2020 to 2027. The ninth generation of consoles is expected to be released by the end of 2020. Based on the connecting device used for virtual reality gaming, the market has been classified into gaming console, PC/ desktop, and smartphone. Sony Corporation and Microsoft have proclaimed their new consoles which are predicted to contain solid-state hard drives, backward compatibility, higher frame rates, and superior quality virtual reality support. These new consoles are anticipated to drive industry growth in the coming seven years.

The PC/desktop segment accounted for a global revenue share of around 25.0% in 2019. Some entertainment-based computer companies such as ORIGIN PC Corporation and CYBERPOWERPC also offer customizations for PCs as per the users’ requirements. The VR gaming experience on the PC/ desktop depends largely on the Graphics Processing Unit (GPU) and the RAM incorporated in it. Chip fabricators such as NVIDIA Corporation and Advanced Micro Connecting devices, Inc. are continuously upgrading their offerings to suit the ever-growing market.

In case of using smartphones for virtual reality gaming, the segment is anticipated to emerge as the fastest-growing from 2020 to 2027. This growth can be attributed to the ubiquity of smartphones and the ease and price at which they are available. The advancements in the GPU and processor of smartphones are expected to drive the segment growth from 2020 to 2027. VR games are reaching to an all-new set of users who are not necessarily identified as gamers but are spending many hours on such content by means of their smartphones. Consumers in China and India are largely seen to be using their smartphones or tablets for playing, which complements the segment growth.

The individual user segment accounted for more than 60.0% revenue share in 2019 and is anticipated to grow at a considerable pace over the forecast period. The most alluded factor to restrict the elevated consumer adoption of VR in gaming is cost. However, the accessibility and availability of VR games at the users’ home and at dropping prices of hardware over the period is consenting the segment dominance in the industry. Industry players are coming up with cost-effective gadgets to penetrate the market as well as widen their consumer base. For instance, the cardboard headset launched by Google, LLC. is an HMD that can be used with a smartphone for experiencing the simulated world of the electronic game. The unceasing efforts of companies to infiltrate in the market and reach maximum customers are expected to drive the segment growth.

By user, the market has been categorized into commercial space and individual users. The commercial space segment is expected to witness the fastest growth, registering a CAGR of over 30.0% from 2020 to 2027. There is a considerable rise in the number of VR gaming zones and arcades worldwide owing to their ability to let consumers completely isolate themselves from the real and experience the simulated world created in that space. Youngsters are more attracted to commercial spaces such as arcades, cafes, and amusement parks as they offer superior virtual reality in gaming experience at moderate costs on an hourly basis. Commercial spaces deliver a premium experience with large open areas and enhanced VR interactions, giving users a more immersive fulfillment.

The hardware segment accounted for the largest revenue share of over 60.0% in 2019 and is expected to observe significant growth over the forecast period. This may be attributed to the continual upgradations in the VR wearables and accessories, including input devices, masks, gloves, headsets, and bodysuits. The hardware includes any physical component for playing such as gaming platforms, storage media, accessories, and gaming kits. There is a steady demand for input devices that are a requisite for playing virtual reality games. The most renowned input devices include Oculus Rift, PlayStation VR, HTC Vive, and Samsung Gear VR.

The software industry is anticipated to expand at a CAGR of over 20.0% from 2020 to 2027. The software segment is likely to experience modest growth as compared to the hardware segment, which is projected to witness rapid growth. VR surrounding and effects are produced using VR software to edge the environment as close as possible to reality. The challenge for the software industry, on the other hand, is to develop software and games, which creates a much more captivating and appealing effect for players.

Asia Pacific dominated the market accounting for over 40.0% share of global revenue in 2019 and is estimated to continue its dominance for the coming seven years. Within the region, China and Japan accounted for a higher market share owing to the vast consumer base and increased adoption of VR games on smartphones. The region is expected to witness huge adoption of the technology, which is also aided by high-speed 5G network deployment, thus enhancing the gaming involvement. Countries such as South Korea and India are expected to observe significant demand for VR games owing to the technological advancements in the entertainment industry and rising disposable income.

The increased and faster adoption of virtual reality games in North America is because most of the tech companies are based in the region. The U.S. accounted for a significant share in 2019 as the region has been observing higher deployment due to the early adoption of new technologies and similar consumer preferences. European regions are anticipated to witness steady growth due to the increasing investments in the virtual reality domain. Germany being the gaming hub is even witnessing a surge in the VR gaming arcades, free-roam, and escape rooms.

Latin America and Middle East and Africa are probable to emerge as the fastest-growing regions over the forecast period. The increasing number of start-ups in the virtual reality space, rising crowdfunding, growing console sales, and substantial gamer-base make the regions very lucrative markets for VR-based recreation. The industry is beholding Brazil, Mexico, UAE., Saudi Arabia, Bahrain, and Israel as upcoming hubs for VR in gaming industry.

Intense competition among key industry players has shifted the focus of the companies to cost-effectiveness, innovation, and quality of the VR hardware, content, and software. The transition from one generation of gaming consoles to another usually takes five to six years. However, after the eighth generation of consoles released in 2012, the key players in the industry launched virtual reality supporting peripherals and consoles within a span of around four years, signifying that the companies have been augmenting their products to gain a competitive edge in the market. Sellers are continually involved in the technological upgrade and pass it to gamers. Some of the prominent players operating in the virtual reality in gaming market include:

This report forecasts revenue growth at global, regional, and country levels and provides an analysis of the latest industry trends in each of the sub-segments from 2016 to 2027. Grand View Research has segmented the global virtual reality in gaming market report on the basis of component, connecting device, user, and region:

How big is the virtual reality in gaming market?

What is the virtual reality in gaming market growth?

Which segment accounted for the largest virtual reality in gaming market share?

b. Asia Pacific dominated the virtual reality in gaming market with a share of 44.2% in 2019. This is attributable to the rising disposable income in the region coupled with the presence of substantial number of gamers.

Who are the key players in virtual reality in gaming market?

What are the factors driving the virtual reality in gaming market?

b. Key factors that are driving the market growth include rising demand of gaming among youth population, increasing competitiveness in the virtual reality gaming space, and increasing disposable income of buyers in developing countries.