The global sternal closure systems market size was estimated to be valued at USD 2.39 billion in 2021 and is projected to expand at a compound annual growth rate (CAGR) of 5.4% from 2022 to 2030. The expanding base of the geriatric population undergoing open-heart surgery through median sternotomy is considered to be one of the primary growth stimulants for the market. The median sternotomy procedure has remained the most popular technique for cardiac exposure to date, owing to easy and quick access to heart valves and vessels. 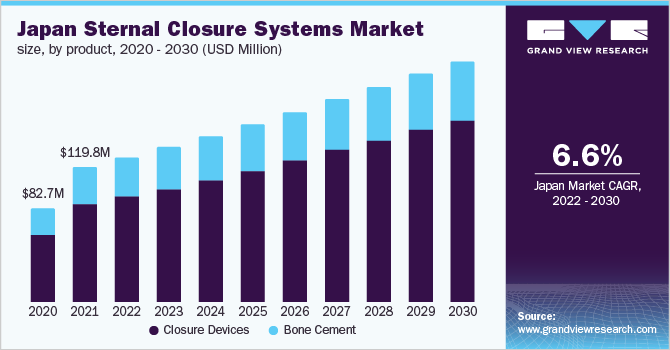 Sternotomy and sternal closure occur prior to and post-cardiac surgery respectively. Moreover, rapid technological advancements, such as the use of biocompatible polymers including PEEK, tritium, nitinol, pre-sternotomy plates, and the development of minimal invasive median sternotomy procedures, are expected to drive the market growth.

A rise in the number of surgical procedures globally has driven demand for surgical instruments leading to the growth of the market. According to OECD, the estimated surgical procedures in 2012 were around 399,952 in the U.K., which later increased to 491,604 by 2016. Furthermore, lack of exercise and poor nutrition increase the risk of heart diseases in the elderly population. Furthermore, the growing geriatric population, which is more susceptible to chronic CVDs, is leading to an increase in the number of cardiovascular surgical procedures, thereby boosting the demand for sternal closure systems globally.

Moreover, developing countries are focusing on investing in public healthcare infrastructure due to the rise in non-communicable disease burden and injuries, which will further increase the number of surgical procedures in developing regions as well. According to data published by the world bank, in 2015, China's per capita healthcare expenditure was USD 425.6 accounting for 5.3% of GDP. Furthermore, the Plan of Health China 2030 estimates that by 2020 healthcare spending is expected to account for 6.5% to 7% of its total GDP.

Sedentary lifestyles, high smoking & alcohol consumption, and unhealthy diet are leading to an increase in the prevalence of cardiac diseases globally. This is resulting in a rise in surgical procedures, which in turn, is likely to fuel the adoption of sternal closure systems in surgeries over the coming years. According to a survey conducted by the Centers for Disease Control and Prevention, in 2016, 28.1 million adults in the U.S. were diagnosed with heart disease.

The closure devices segment accounted for the highest market share of 71.9% in 2021. Factors such as the launch of products, coupled with rising per capita expenditure in developed as well as developing economies, are the key factors responsible for the dominant share of the segment. These devices have demonstrated benefits such as a decrease in postoperative complications and infections along with faster recovery time in comparison with bone cement. Moreover, rising efforts being taken by key players in the market to introduce new techniques and product lines are likely to further boost the segment growth in the near future.

Key products in this segment include SternaLock Blu and SternaLock 360 by Zimmer Biomet; Sternal ZIPFIX System by DePuy Synthes; and Sternal Talon Implants by KLS Martin Group. Companies operating in the market are focusing on R&D to deliver advanced solutions. For instance, Orthofix Holdings, Inc., a U.S.-based company engaged in the R&D and marketing of orthopedic products, has invested USD 28.8 million and USD 29.7 million during FY 2017 and FY 2018, respectively. In January 2017, JACE Medical, LLC launched pre-monoblock sternal plates in the U.S. These plates are used prior to the surgery and work as implant positioners.

The titanium segment is expected to account for the largest revenue share of 43.1% in 2021. This dominance is due to the associated benefits such as corrosion-resistant, ability to effectively join human bones, and biocompatibility of titanium. In addition, the non-ferromagnetic property, which allows patients with titanium implants to examine safely under Magnetic resonance imaging (MRI) scan, is further enhancing the penetration of these materials in the industry.

Furthermore, high efficacy, non-toxic nature of implant and stability of the titanium products, and greater economic feasibility coupled with increased affordability for the use of advanced titanium clips and plates in developed as well as developing regions are projected to bolster the penetration of titanium-based sternal closure systems. The Polyether Ether Ketone (PEEK) segment is expected to grow at the highest rate during the forecast period owing to technological advancements, growing R&D investments by key players, and biocompatible properties of the material. 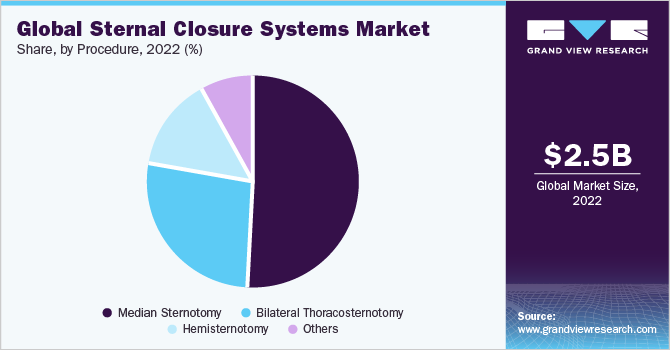 The North America region captured the largest market share of 34.7% in 2021 and is expected to continue its dominance during the forecast period. Rising collaborative efforts commenced by key players to improve their product offerings and ensure high-quality standards are further anticipated to boost the demand for systems across the region. For instance, in August 2017, A&E Medical Corporation acquired RTI Surgical’s Cardiothoracic Closure business. RTI Surgical’s Cardiothoracic Closure business offers cable-based plate products such as Tritium SPC System.

Moreover, the major share of North America can also be attributed to the high cardiac disease burden in this region. For instance, according to a study conducted by the CDC, around 28.1 million people in the U.S. have been diagnosed with heart-related disorders such as cardiac arrest and valvular heart disease.

In addition, favorable reimbursement regulations are expected to further fuel the growth of the market. As per the revised wound closure Medicare reimbursement coding guide, sternal closure procedures are reimbursed under 216, 217, 218, 219, 220, 221, 228, and 229 MS-DRG codes from 2018.

On the other hand, Asia Pacific is expected to grow at a lucrative 6.5% compound annual growth rate (CAGR) during the forecast period, as key players are increasing their geographical presence in the region and focusing on the commercialization of their products at a relatively affordable price. For instance, in June 2016, the KLS Martin Group started its operations in Chennai, India in an attempt to seize the growing opportunity.

Product launch, strategic acquisitions, and innovation are the major strategies adopted by the market players to retain their market share. In September 2019, DePuy Synthes launched the CONDUIT interbody Platform with EIT cellular titanium technology to expand its product portfolio of degenerative spine diseases. In October 2018, Zimmer Biomet launched Vitality+ and Vital Spinal Fixation Systems in the U.S. The Vital Spinal Fixation System offers a solution for degenerative thoracolumbar procedures. Some prominent players in the global sternal closure systems market include:

This report forecasts revenue growth at global, regional, & country levels as well as provides an analysis of the latest industry trends in each of the sub-segments from 2018 to 2030. For this study, Grand View Research has segmented the global sternal closure systems market report based on product, procedure, material, and region:

b. North America dominated the sternal closure systems market with a share of 34.7% in 2021. This is attributable to rising collaborative efforts commenced by key players to improve their product offerings and ensure high-quality standards.

Who are the key players in the sternal closure systems market?

What are the factors driving the sternal closure systems market?

b. Key factors that are driving the sternal closure systems market growth include an increase in the number of surgical procedures and technological advancements in sternotomy techniques.

How big is the sternal closure systems market?

b. The global sternal closure systems market size was estimated at USD 2.4 billion in 2021 and is expected to reach USD 2.52 billion in 2022.

What is the sternal closure systems market growth?