The global submarine cables market size was valued at USD 21.3 billion in 2019 and is expected to grow at a compound annual growth rate (CAGR) of 7.1% from 2020 to 2027. Increasing investments in offshore wind farms, increasing data traffic, and investments by OTT providers to suffice the requirements are the major factors driving the market. The submarine cables are widely used for power and communication applications. The submarine power cables are used for power transmission to the oil rigs, carry power generated from offshore wind farms to the power station, and inter-country and island connections. Submarine communication cables are used for inter-region/country communications. These communication cables help in faster communication and carry a large amount of data traffic across the globe. 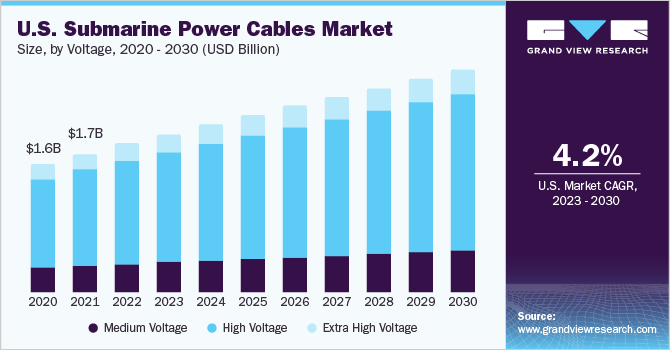 The submarine communication cables carry around 90% of the data traffic across the world. In addition, their total carrying capacity is in terabits per second. As a result, they are the most valued cables for the OTT and communication providers, such as Google, Amazon, Facebook, and Microsoft. Most of the economies consider submarine cables as a vital component of the economy and have set regulations to protect it from threats. For instance, the Australian Communications and Media Authority (ACMA) has created safety zones that prohibit activities that can damage these cables, which are linked through Australia & Rest of the World. In addition, it legalizes the installation of new submarine cables projects.

Increase in data traffic has augmented the product demand over the last few years. Regions, such as Europe, Middle East, Asia Pacific, and South America, have noted increased investments in submarine communication cables. Companies, such as Google, Facebook, Amazon, and Microsoft, are the primary influencers of the submarine cables. Google owns 10,433 miles of submarine cables internationally, and 63,605 miles in consortium with Facebook, Amazon, and Microsoft.

For instance, the Government of Japan is constructing a floating wind farm, 12 miles away from the sea coast, and is expected to install 140 floating wind turbines by 2020. Growing product demand has led the manufacturers to actively participate in the installation & commissioning, upgrades, and maintenance of the submarine cables. For instance, in February 2020, The Europe India Gateway (EIG) submarine cable system has been upgraded to fast-track and reinforce the connectivity amongst businesses in Europe, Middle East, and India by Ciena Corp.

The high voltage segment accounted for the largest revenue share of around 65% in 2019. High voltage cables ranging above 33kV are widely used for the power transmission and distribution of power. Thus, the increasing demand for the HVDC submarine power cables and rising investments in offshore wind power generation are the primary factors driving the segment. In addition, HV cables reduce the transmission losses and thus, allow efficient power transmission.

The Medium Voltage (MV) cables segment accounted for a significant share and is projected to expand further at a steady CAGR of 6.2% from 2020 to 2027. The growth is attributed to the utilization of MV cables in the offshore oil & gas infrastructure for power transmission. The demand from overseas oil & gas operations has been increasing, thus, driving the MV cables market.

The offshore wind power generation segment accounted for the largest revenue share of around 45% in 2019 and will expand further at the fastest CAGR from 2020 to 2027. Increasing investments in offshore wind power generation and usage of submarine power cables for long-distance power transmissions from these plants is the primary factor boosting the segment growth. For instance, in August 2018, Northwester NV awarded a contract to NSW (a subsidiary of Prysmian S.p.A), to develop the submarine cable system necessary for the offshore wind farm. 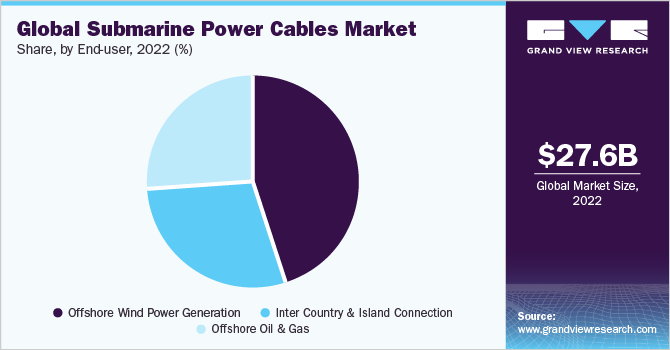 The offshore oil & gas segment is expected to register a significant growth rate of 5.8% from 2020 to 2027. Growing deep-water drilling activities and subsea operations are expected to drive the segment from 2020 to 2027. Developing countries in South America, the Middle East, and Africa are undertaking new investments in offshore oil & gas influencing the market growth. For instance, in March 2019, GTT established an oil & gas unit that is serving oil & gas companies for the secure transmission of data through its submarine cable.

The Asia Pacific region accounted for the largest share of around 38% in 2019 and is projected to expand at the fastest CAGR from 2020 to 2027. Led by China, the region has the highest adoption and deployment of wind farms. According to IEEFA, China had 4.6GW1 of operational offshore wind power capacity in 2018. In January 2019, China approved 24 offshore wind power projects off the coast of Jiangsu Province with a total capacity of 6.7GW and an investment injection worth USD 18 billion. The projects are expected to be operational by 2020. China’s largest utilities, including China Energy Group, China General Nuclear Power Corp., China Huaneng Group, and the State Power Investment Corp., are backing these offshore wind projects. In addition, in April 2020, Facebook acquired USD 5.7 billion stakes in Reliance Jio (India). Hence, contributing to the rise in demand for submarine cables in the region.

The market in South America is anticipated to register a significant CAGR from 2020 to 2027 owing to the increasing investments in wind farms and inter-country & island connections in the region. For instance, in March 2016, Hawaiki Submarine Cable LP and TE SubCom signed a contract to connect link Australia and New Zealand to mainland U.S. and Hawaii, with options to expand to several South Pacific islands, thus increasing the demand for submarine cables in the region.

A lot of small and mid-sized companies in the market focus on smaller projects in various regions. Many suppliers are also involved in offshore oil and gas projects, undersea electrical cables, and other marine infrastructure projects across the globe. For instance, in December 2017, Alcatel Submarine Networks (ASN), part of Nokia, has been awarded a turnkey contract (EPCI) by Statoil to supply and install DC/FO technology as the subsea control infrastructure for the Johan Castberg field in the Barents Sea. Google holds the most extended submarine cables named Curie Cable, which links Chile and Los Angeles. The majority of the companies offer and connect submarine cables with partnerships and contracts/consortium. Therefore, these firms do not resell the capacity of cables as they finance cable investments. Some of the prominent players in the submarine cables market include:

This report forecasts revenue growth at global, regional, and country levels and provides an analysis of the latest industry trends in each of the sub-segments from 2016 to 2027. For the purpose of this study, Grand View Research has segmented the global submarine cables market report on the basis of application, voltage, end user, component, offerings, and region:

How big is the submarine cables market?

What is the submarine cables market growth?

Which segment accounted for the largest submarine cables market share?

b. Asia Pacific dominated the submarine cables market with a share of 38% in 2019. This is attributable to increased demand from offshore wind farm investments.

Who are the key players in submarine cables market?

b. Some key players operating in the submarine cables market include Alcatel-Lucent, TE SubCom, and NEC Corporation.

What are the factors driving the submarine cables market?

b. Key factors driving the submarine cables market growth include increasing data traffic, and investments by OTT providers to suffice the requirements.