Oil forms a dominant part of energy sources and growing energy-intensive industries such as construction, automotive, and power are expected to act as major drivers for oil & gas industry growth in the coming years. New drilling technologies have contributed to the discovery of hydrocarbon reservoirs in offshore and meet surging energy demand. Technological innovations such as subsea injection manifolds, and subsea production manifolds, allow exploration of deep subsurface around oil platforms and infrastructure.

Subsea manifolds market by application in the U.S. was USD 0.38 billion in 2016 and is anticipated to grow steadily over the next eight years. Regulatory compliance, equipment stability, and R&D investments for technological innovations are the factors playing the key role in deepwater projects in the US.

The onset of deepwater exploration is subject to regulatory adherence of subsea equipment used for the exploration and transportation of extracted oil resources. High pressure and temperature variation in the deep-sea environment leads to corrosion and failure of drilling tools and pipelines. This necessitates the requirement for advanced equipment such as subsea manifolds with enhanced resilience to corrosion and weathering.

The global demand for subsea manifolds is increasing owing to rising number of drilling activities. Production emerged as the largest application segment and accounted for over 61.1% of the total market revenue in 2016. 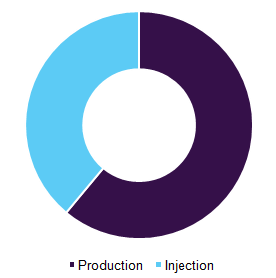 Subsea manifolds for production purposes are used for various applications by E&P companies including, well testing, allocation management, sampling, and isolation. These types of systems are a subsea structure consisting of pipework and valves designed & manufactured in a manner to direct & commingle the produced resources from the wells into multiple flow lines.

The flexible design of the subsea production manifolds allows the operators to establish flow line connections, and also enables the gas lift distribution, from multiple wells at the same time. These systems can be utilized to attain vertical or horizontal flow line connections. The benefits and features of the vertical flow line connections include compact structural design, direct mounting to the desired foundation, configurable by means of retrievable or internal pigging loops for round-trip pigging, and installation of a simplified jumper.

The horizontal flow line connections by means of production manifold systems have various benefits including, reduction in snagging risk while working in shallow waters, enhanced protection for dropped-object, smooth flow of fluids on account of facilitated self-draining, and integrated guidance system to enable accurate connections.

Subsea injection manifold is a complex structure with a number of pipes and valves, designed to inject the fluids into multiple wells. These injection manifolds can be re-configured to carry and inject various types of fracturing fluids such as oil-based fluids, synthetic-based fluids, foam-based fluids, water-alternating-gas, water, and gas. These manifolds are also able to connect to well reservoirs horizontally or vertically and have a highly customizable design to carry out operations on different types of soil on the seabed.

Asia Pacific was the leading market and accounted for 28.2% of the overall market revenue in 2016. Increasing acreages in shale basins coupled with the government’s plans to expand the existing production capacity of the shale gas in this region are expected to drive the market growth in this region over the next eight years. Favorable government support coupled with growing exploration and production activities in China is expected to augment the offshore drilling activities in the country. The Chinese government is encouraging coal bed methane (CBM) exploitation through subsidies.

Early developments of North America’s shale gas reserves from deepwater coupled with favorable governmental regulations to develop other unconventional hydrocarbon reserves have boosted the offshore drilling market in this region. According to the U.S. Energy Information Administration (EIA) that the net petroleum imports have been slowing down on account of the increasing domestic oil production. The imports in the U.S. have dropped from 60% in 2004 to 38% in 2013. This drop is on account of the increasing offshore horizontal drilling in the region.

In the European region, technological advancements in drilling techniques along with development of unconventional oil gas reserves in deepwater is expected to boost the industry growth in the next eight years. The European region is thus anticipated to have a major market share since a large number of installations of manifolds are being carried out.

Russia is a major producer and exporter of oil and natural gas, and its economy largely depends on energy exports. In addition, the government of Russia did not pass any effective acts and enactments to control hydraulic fracturing in the region. Russia also has the world’s largest shale oil reserves which are still untapped and holds a great potential for participants to invest in.

The subsea manifolds market is expected to witness significant growth in Central & South America (CSA), especially in emerging economies of South Africa and Brazil. Huge potential of shale gas in Morocco and Egypt is expected to facilitate new investments by foreign players in exploration and production activities over the forecast period. Offshore areas in Brazil, Chile, & Argentina, are anticipated to be major consumers, on account of the long-term contracts signed between major subsea technology manufacturers and the raw material suppliers. Low pressures in the reservoir and the presence of heavy oils in deepwater of the region are known to be the driving factors for the adoption of subsea technologies.

The major players in the industry are constantly involved in joint ventures, signing of Memorandum of Understanding (MoU), mergers & acquisitions. In August 2016, Larson & Toubro Hydrocarbon Engineering and General Electric signed an MoU to jointly manufacture production & injection subsea manifolds for employment in the basin of Krishna-Godavari on the east Indian coast.

This report forecasts revenue growth at global, regional & country levels and provides an analysis on the industry trends in each of the sub-segments from 2014 to 2025. For the purpose of this study, Grand View Research has segmented the global subsea manifolds market on the basis of application, and region: