The global sulfur bentonite market size was valued at USD 89.04 million in 2018 and is projected to expand at an estimated CAGR of 5.6% from 2019 to 2025. Growing production of oilseeds and increasing deficiency of sulfur in soil is expected to drive the demand. 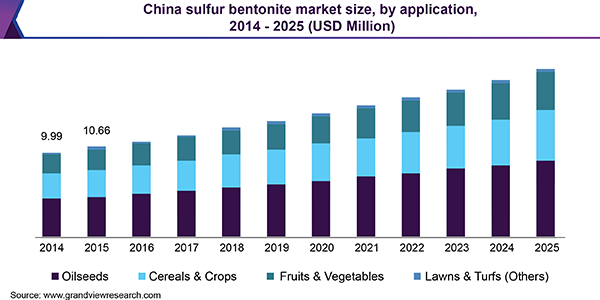 The market is predominantly driven by rising demand for sulfur-rich fertilizers in crop cultivation. The product is a highly concentrated fertilizer and falls under elemental sulfur fertilizers which have 90 or more than 90% of micronutrient content. These fertilizers are used for the cultivation of oilseeds, cereals, fruits, and vegetables and have increased the production yield by almost 20% to 30% for major oilseeds. The oxidative property of sulfur bentonite controls the release of other nutrients, thus reducing nutrient losses from the soil without environmental risks. Other factors such as easy raw material availability, convenient trade opportunities, and product commercialization are further anticipated to positively influence the growth.

China is one of the prominent importers of sulfur in the world and accounts for one-third of the global trade and about a quarter of the global consumption. Every year, the country imports around 10 million to 12 million tons of the compound, in addition to the domestic production for consumption.

According to the U.S. Geological Survey, the country is also the largest producer of sulfur in the world with total production of 17.4 million tons in 2017. Yet, the country has a deficit of high sulfur based fertilizers, which has resulted in high sulfur deficiency in soil across the country.

Sulfur bentonite is applied to maintain the nutritional balance of soil and improve nutrient availability to the crops. Various parameters have to be taken into consideration for selecting the most efficient fertilizer, such as soil type, crop type, and nutritional requirement for better crop growth.

Reduction in the sulfur content of soil is caused by multiple reasons including bacterial change, soil runoff, poor water drainage, and pollution. In order to balance the soil content and optimize crop yield, the product is widely used for sulfur enrichment than others.

On the basis of application, the sulfur bentonite market is segmented into oilseeds, fruits and vegetables, cereals and crops and lawns and turfs (others). The use of fertilizers is essential for the cultivation of oilseeds as sulfur uptake by the plant is directly related to the oil content in oilseed crops. According to a recent study by research institutes, approximately 12 kg to 18 kg of sulfur is required to produce a ton of oilseeds.

The requirement of compound in cereals is very similar to phosphorus uptake. The protein cells of crops consist of sulfur-containing amino acids such as methionine, cystine, and cysteine. Functionally, the use of the product significantly influences crop yield, improves flavors and odor, and increases resistance to cold climate. Sulfur deficiency is generally observed during the early stages of the growth as it can easily leach from the soil surface. The change in protein composition results in young leaves becoming pale yellow and stems tend to remain shorter in size, ultimately affecting the quality and size of the seed.

The deficiency in fruits and vegetables results in spindly stems, yellowish veins, and poorly nourished flowers and fruits. In late winters, sulfate fertilizers are extremely essential for vegetables such as cabbage, broccoli, turnips and radish as these fertilizers provide weather resistance and are also useful in controlling certain plant diseases. In addition, sulfur plays an important role in lowering the pH of the soil, increasing plant root access to nutrients, and the formation of plant tissues.

Asia Pacific held the dominant volume share of 31.9% in 2018. The region is expected to dominate the industry over the forecast period due to growing awareness of consumer towards sulfur based fertilizers. China and India dominate the regional consumption. These countries are characterized by the presence of global manufactures such as Coromandel International Limited, Deepak Fertilizers & Petrochemicals Corporation Limited, and National Fertilizers Limited. A significant share of the product is also being imported from North America and Middle East and Africa under brand name Omasulf, Tiger-sul, and Brimstone among others.

Latin America is the second largest market for sulfur bentonite and is majorly driven by the growing demand of various food crops and oil seeds. The region has inadequate cultivable land and rising micronutrients deficiency in soil to satisfy the food requirement and sustain its large population; hence farmers use variety of fertilizers to improve soil fertility. In Latin America, Brazil accounts for the highest sulfur bentonite consumption followed by Mexico, Argentina, and Colombia. Brazil and Argentina also represent noteworthy share in the global oilseeds production, thus representing major demand. 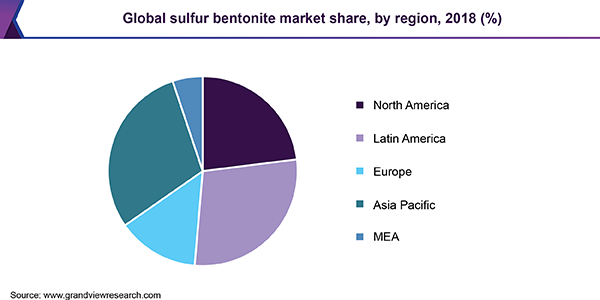 Rising oilseeds production such as soybean and rapeseed is expected to propel the consumption of product in the region. Furthermore, Middle East and Africa (MEA) is one of the leading sulfur-producing regions across the world. Increasing production of crops such as dates, watermelons, wheat, potatoes, and tomatoes drives the regional market. MEA also exports the product to the countries from Asia Pacific and Europe.

Major players such as Tiger Sul, Devco Australia, and Coromandel International, among others are continuously investing in R&D to improve the product quality. These companies also have a strong foothold, better established and well recognized products and brands that makes it difficult for the new players to compete in the market.

This report forecasts revenue growth at a global, regional, and country levels and provides an analysis of the latest industry trends in each of the sub-segments from 2014 to 2025. For the purpose of this study, Grand View Research has segmented the global sulfur bentonite market report on the basis of application and region:

How big is the sulfur bentonite market?

What is the sulfur bentonite market growth?

Which segment accounted for the largest sulfur bentonite market share?

b. Asia Pacific dominated the sulfur bentonite market with a share of 29.7% in 2019. This is attributable to growing awareness of consumer towards sulfur based fertilizers and presence of major fertilizer manufacturers including Coromandel International Limited, Deepak Fertilizers & Petrochemicals Corporation Limited, and National Fertilizers Limited.

Who are the key players in sulfur bentonite market?

What are the factors driving the sulfur bentonite market?

b. Key factors that are driving the market growth include growing production of oilseeds and rising awareness regarding definiency of sulfur in the soil.