The global synthetic aperture radar market size was valued at USD 2.21 billion in 2019 and is expected to grow at a compound annual growth rate (CAGR) of 10.7% from 2020 to 2027. Synthetic aperture radar (SAR) uses remote sensing technology to build two- and three-dimensional, high-resolution images of objects on earth. It requires a longer antenna for a conventional radar system to generate high-resolution images, which drastically increases the weight and cost of the satellite. For example, to get a spatial resolution of 10m with a space satellite operating at a wavelength of 5 cm, it will require an antenna of about 4,250 m long, which is equivalent to 47 football fields. Synthetic aperture technology uses a shorter set of antennas to simulate a large antenna to gather a set of acquisitions and combine the data to create a high-resolution image. 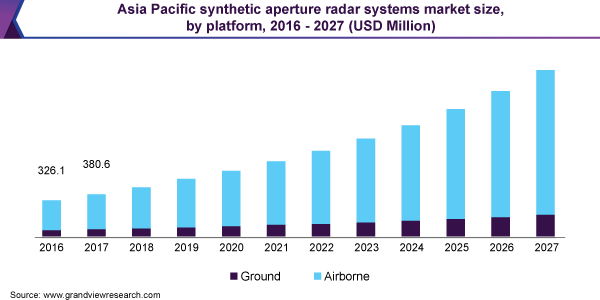 SAR operates at multiple frequencies, which makes it suitable to work during bad weather conditions, without sunlight and clear skies. Such factors are anticipated to fuel the market growth over the forecast period. Furthermore, rising need for situational awareness and early warnings for decision making against natural disasters and potential enemy threats are the factors expected to drive the market.

Synthetic aperture radar produces high-quality digital images of the terrains, forests, urban regions, snow-clad mountains, and oceans, which can be used to update the old databases to create new maps. Moreover, it offers a cost-effective solution for surveying large areas with high accuracy and precision. These high-quality images enable a sophisticated analysis of data, which can be used to make digital terrain models for land cover information. Such data can be used for applications like vegetation cover mapping, biomass estimation, mineral exploration, and biological water monitoring for research purposes. SAR provides accurate data and precisely captured surface features and topographical features of the terrain, thereby resulting in high adoption by the government agencies for research purposes.

The integration of synthetic aperture radar with the command, control, communications, computers, intelligence, surveillance, and reconnaissance (C4ISR) ecosystem is expected to gain traction in the near future. The defense agencies have to mostly rely on separate systems and displays for collecting and analyzing data retrieved from SAR. This is a tedious and time-consuming process, considering the involvement of several pre-processing steps for analyzing the data. The integration with C4ISR will provide the operator with tools to analyze the data and help with planning, tasking, executing military missions, and propelling SAR's adoption in the defense sector.

High development cost involved in the customization of the synthetic aperture radar, along with government regulations on using limited bandwidth, is another factor that is expected to affect market growth. For instance, the U.S. government had placed a limit of 0.25 m on the resolution of commercial SAR data collection. This rule refrains any non-U.S. firms from transmitting the SAR data above 0.25 m outside the U.S. However, the rule has been lifted and it will allow companies to sell higher resolution data above 0.25 m for commercial purposes. Relaxations in the norms and support from the governments will help companies to serve the market with better resolution data, which is expected to contribute to the market growth.

The single frequency segment dominated the market with a share of 82.7% in 2019. This high share is attributed to the simple operation and its ability to monitor areas over specialized wavelengths. Over the years, the single frequency SAR has been deployed on the airborne and ground systems as it provides a cost effective and lightweight solution for earth observation purpose. The multi-frequency SAR has been witnessing steady growth owing to its ability to monitor and capture images for various applications at required frequencies. Besides, having a better penetration ability through cloud covers and inclement weather, the deployment of multi-frequency systems has been limited to space-based SAR due to its high cost and large size.

Single-frequency SAR has been further categorized in X, L, C, and other frequencies, including S, Ka, and Ku bands. X, L, and C bands are the most used bands, while Ka, K, and Ku are rarely used for synthetic aperture radars due to their smaller range of wavelengths. Wavelength is a crucial feature of SAR as it determines the signals’ penetration capability through the object. L band has the highest wavelength of 30-15 cm and can be used for applications like biomass and vegetation mapping and geophysical monitoring.

C band SAR operates between the ranges of 7.5-3.8 cm, has moderate penetration ability, and is suitable for applications like maritime ocean navigation, vegetation mapping, and snow mapping. While most SARs in the past deployed L and C bands, the L band is expected to grow at the highest rate due to its high penetration capability. The X band SAR operates at a lower wavelength range of 3.8-2.4 cm but provides high-resolution images, which makes it suitable for defense surveillance, agriculture, and analysis of wind movement over the ocean surface and urban monitoring. Such benefits are expected to increase the adoption of single frequency radars and significantly contribute to the segment growth.

The airborne segment dominated the market with a share of 83.5% in 2019. This high share is attributed to airborne systems' capability to scan and capture larger areas compared to ground-based SAR. Synthetic aperture radars are deployed on three platforms under the airborne segment, namely spacecraft, aircraft, and unmanned aerial vehicles (UAV). The aircraft platform holds the largest market share owing to the increased demand for surveillance activities in the defense sector. The UAV segment is expected to exhibit the highest growth rate due to its increasing demand in commercial as well as military operations and lower deployment costs of SAR systems.

Ground-based SAR is a short-range device used for monitoring the earth surfaces. It is used to monitor safety-critical deformation applications like mining and tunnel construction, structural health monitoring, and quarry, and cut slope and landslide monitoring. Ground-based SAR can be mounted on a moving vehicle or a structure due to which it has been used for commercial and urban monitoring in recent years. The system has been deployed to monitor, scan, detect, and capture applications like archaeology, road conditions, detecting underground pipes and cables, buried bodies, and hidden objects. These systems are expected to witness steady growth over the forecast period owing to their limited range of scanning the areas.

The multi-mode segment dominated the market with a share of 72.7% in 2019. This high share is attributed to the wide adoption of SAR operating with different modes to harness each mode's characteristics. SAR mainly operates with three different operating modes, namely ScanSAR, stripmap, and spotlight mode. The most fundamental mode used is stripmap, which possesses a narrow swath width. It is focussed on a single area and is suitable for monitoring applications like agriculture, mining, urban sites, illegal activities, and coastal areas. ScanSAR mode provides extensive area coverage and provides images of wider swaths, while spotlight mode is used for detecting changes in a congested environment in urban areas.

Multi-mode systems possess the ability to capture images based on the application requirement. Multi-mode SAR also offers a cost-effective solution compared to single-mode SAR, which can capture application-specific images. Furthermore, multi-mode SAR can use the ability of any one of the operating modes and provide better elevation angles and multiple sub-swaths to capture images. Such factors are further expected to increase the adoption of multimode systems and fuel segment growth.

The defense segment dominated the market with a share of 53.7% in 2019. This is attributed to the growing number of surveillance activities, such as tracking and mapping enemy troop movements, spying, and intelligence data gathering, which has increased the adoption of SAR for military purposes. Furthermore, governments have increased military spending to develop and integrate missiles along with SAR, which will improve the targeting and pointing accuracy of the missile. The usage of SAR has added a new dimension to reconnaissance. It led to the development of technologies like foliage penetration and ground moving target indication, which is expected to increase the adoption of these systems in military operations. 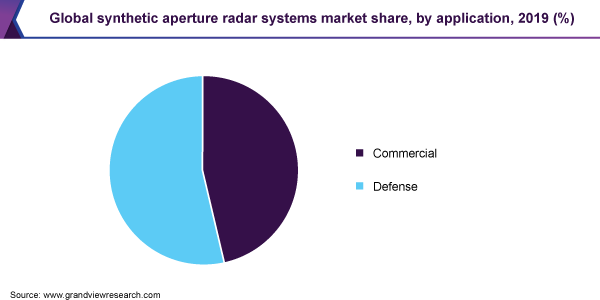 The crisp and clear imaging of SAR has extended its adoption for commercial purposes to monitor urban areas, hilly terrain, and oceans. SAR is used for a wide range of applications in geology, architecture, ecology, hydrology, oceanography, agriculture, and mining. With the usage of SAR, it is easier for researchers to predict natural disasters, like earthquakes, floods, and volcanic eruptions. Furthermore, in the urban areas, SAR is used for applications like infrastructure monitoring, public safety, road network monitoring, dam integrity monitoring, and power lines monitoring. The range of utilities offered by SAR is expected to increase its adoption for commercial purposes, thus driving the segment.

North America dominated the market with a share of 32.4% in 2019. This is attributed to the presence of a significant number of synthetic aperture radar manufacturers and growing military spending for up-gradation of current detection systems in the region. Besides, the collaboration between the U.S. Department of Defense (DOD) and the National Aeronautics and Space Administration (NASA) has increased the investment in the space-based SAR satellite projects. Europe is expected to witness steady growth during the forecast period with the scheduled launch of BIOMASS, earth observation satellite by the European Space Agency (ESA) in 2021.

Asia Pacific is expected to register the highest growth rate over the forecast period, with China and India being the major contributors in this region. In 2019, China launched Gaofen-7, an earth observation satellite with synthetic aperture radar, while India Space Research Organization (ISRO) and NASA are working together to launch NISAR, an earth observation satellite in 2022. Furthermore, increased demand for border security surveillance is expected to boost the market growth in the Asia Pacific region. Latin American countries like Brazil and Argentina have been the major contributors in this regional market, with Argentina launching SAOCOM-1a satellite in 2018. Another satellite SAOCOM-1b is scheduled to be launched in 2020 by SpaceX.

The market is moderately fragmented owing to the presence of several players. The growth of companies in this market is highly dependent on government support and financial funding from investors. Several market players are engaged in forming strategic partnerships and making investments to sustain their market position. For instance, in November 2019, RS Metric formed an alliance with ICEYE to provide SAR Metal Signals. This made ICEYE the first company to offer a database on the powdered iron ore.

Furthermore, many startups in this market like ICEYE, Urthcast, Capella Space, Ursa Space Systems, and Synspective, Inc. are focused on receiving funding to fuel their projects. For instance, Synspective, Inc., a Japanese startup, raised about 100 million USD since its incorporation in 2018 from investors like SHIMIZU CORPORATION, Space-a START 1 Limited Partnership, Mitsubishi UFJ Trust and Banking Corporation, and Abies Ventures Fund I, L.P. Some of the prominent players in the synthetic aperture radar market include:

The report forecasts revenue growth at the global, regional, and country levels and provides an analysis of the latest industry trends and opportunities in each of the sub-segments from 2016 to 2027. For the purpose of this study, Grand View Research has segmented the global synthetic aperture radar market report based on frequency, platform, mode, application, and region:

How big is the synthetic aperture radar market?

What is the synthetic aperture radar market growth?

Who are the key players in synthetic aperture radar market?

What are the factors driving the synthetic aperture radar market?

b. Key factors that are driving the market growth include the rising need for situational awareness and early warnings for decision making against natural disasters and potential enemy threats.