The global flight simulator market size was valued at USD 4.6 billion in 2019 and is expected to grow at a compound annual growth rate (CAGR) of 4.2% 2020 to 2027. The benefits offered by these devices include mission critical training programs that ensure effective aircraft operation, low operational costs, and visual systems, that offer near real world experience, and are anticipated to offer avenues for market growth over the next few years. Rising demand for better and effective pilot training is anticipated to catapult growth. The growing importance of aircraft safety as well as the need for substantial training is anticipated to spur demand over the next eight years. 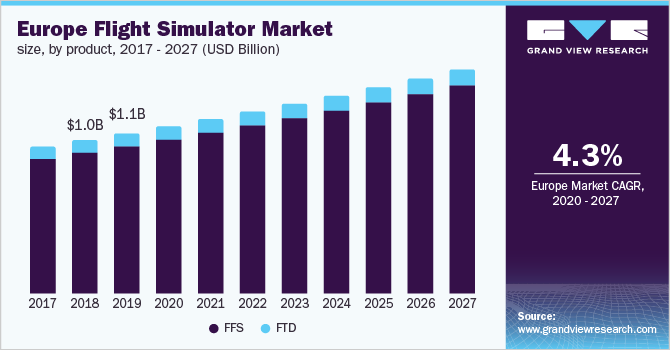 Further, the need for flight handling and safety operations such as situational awareness and skill competency may also promote industry growth. The industry is witnessing unprecedented R&D efforts in aerospace technology coupled with technological advancements resulting in development of highly advanced flight simulators. These products offer high efficiency and have the ability to save fuel costs. Additionally, advancements in computing technology have significantly resulted in incorporation of better visual and motion systems for enhanced fidelity and smoothness, which is also anticipated to drive the market flight simulators market over the forecast period.

Technological advancements resulting in development of highly advanced flight simulator is expected to drive market growth. Lockheed Martin Corporation offers a flight simulator named Prepar3D, which can recreate the cityscape, and night flying illustrations. They have kept it as an open source for private users and software developers to create new applications and environments thus ensuring constant evolution of the program. Additionally, advancements in computing technology have significantly resulted in better visual systems offering near real world experience, which may also drive industry growth over the next seven years.

Rising demand for air travel is expected to propel the global flight simulator market growth over the forecast period. The need to effectively replicate real flying training by using motion and visual systems has resulted in the evolution of sophisticated flight simulator in the market. Increase in government spending and growing security concerns particularly in the military sector is expected to escalate growth significantly.

The growing importance of aircraft safety and need for substantial flight training and simulation is anticipated to spur demand over the coming years. Stringent government norms and regulations pertaining to passenger safety are further expected to elevate product demand. The need for flight handling and safety operations such as situational awareness and flight skill competency may fuel industry growth. Additionally, increasing demand for better and effective pilot training is anticipated to catapult growth.

Technological advancements resulting in development of highly advanced flight simulator is expected to drive market growth. R&D efforts in aerospace technology coupled with performance evaluation of pilots may stimulate market growth over the next few years. High efficiency of simulation technology and ability to save fuel costs are expected to serve as key drivers for the flight simulator market.

Development of simulators for Unmanned Aerial Vehicles (UAVs) is expected to offer alternative opportunity for the flight simulator market. Advancements in computing technology have significantly resulted in better visual systems offering near real-world experience which may also drive industry growth over the next seven years. Development of realistic aircraft system logic complete with overhead and ECAM displays has significantly resulted in high adoption of flight simulators.

Based on product, the industry is segmented into full flight simulator (FFS) and fixed flight training devices (FTDs). The FFS segment accounted for over 90% of the market share in 2019, growing at a revenue-based CAGR of 4.6% during the forecast period. FFS refers to high technical flight simulators that offer high fidelity and reliability. FFS accurately stimulates the aircraft and the environment in which it operates. These devices create motion, sound, visuals and all other aircraft operations in order to create a realistic training environment, which ensures thorough training to the pilots.

FTDs are training modules with limited visual display. The primary purpose of these devices is to train where all indicators and/or switches are on the deck. These devices are extensively used for their low purchase cost and operations. Furthermore, the development of simulators for Unmanned Aerial Vehicles (UAVs) is expected to offer alternative opportunity for the flight simulator market. The increase in the use of UAV drones has increased the need for the training of drone pilots, which, in turn is projected to drive the growth of the market.

Based on application, the market for flight simulator has been segregated into military and defense and civil. The civil segment held a significant part of the market share of about 69.4% in 2019, growing at a revenue-based CAGR of 4.5% during the forecast period. Military and defense includes simulators used for training and mission rehearsals for armed forces. Further, live, virtual, and constructive training offered by flight simulators enables armed forces pilots to perform better in real world tasks or mission, thereby resulting in increased product installation. 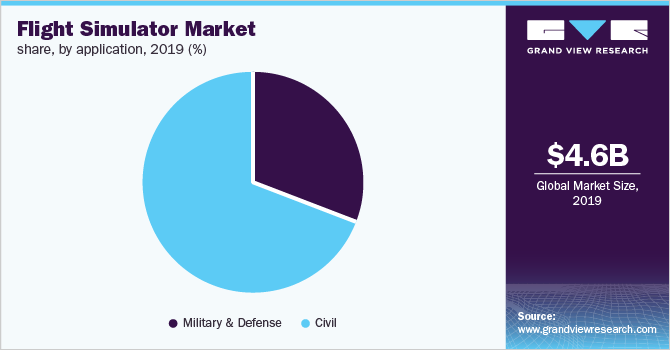 Manufacturers have realized the importance of improving Aircraft Simulation Technology (AST) in order to offer a realistic aircraft system. Therefore, they focus on mergers and acquisitions in order to have greater financial, technical, marketing, manufacturing, and distribution resources. For example, Textron, L-3 Communications and Lockheed Martin have acquired commercial aircraft simulator competitors as a means to reduce their overall exposure to defense markets and seek growth in the civil aviation market.

North America emerged as a key market for flight simulator accounting for over 29% of global revenue in 2019 and is expected to witness slow growth over the forecast period. This is owing to early technology adoption by manufacturers and consumers. In addition, stringent regulations enforced by the Federal Aviation Administration (FAA) and Federal Aviation Regulations including Sec. 61.64 for the use of flight simulator for training purpose may further spur the regional growth. Further, availability of advanced military and commercial infrastructure is also expected to bolster the growth of the market for flight simulator in this region. 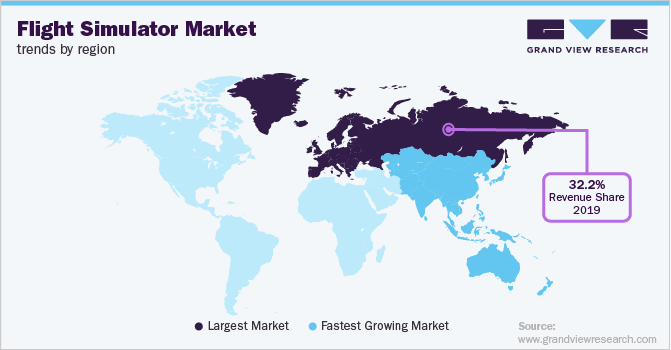 The Asia Pacific is estimated to exhibit high growth over the forecast period owing to increasing demand for these devices particularly in developing countries such as India and China. Inception of the manufacturers in China in early 2015 may further fuel demand in the region. The growth in the Asia Pacific region is attributed to the high demand of air travel with respect to increased trade and tourism. North America may witness slow growth, which may be primarily attributed to the apprehensions regarding air safety along with strict air safety standards enforced by the FAA in the U.S.

The aviation industry was hit hard by the pandemic due to restrictions imposed on air travel. The Canadian flight simulator company CAE Inc. reported a decline of 35.8% in the profit from flight simulators during the first quarter of 2020. However, by the end of the second quarter of 2020, the sales of commercial flight simulators experienced an uptick, with demand generated from cargo airlines and carriers. Additionally, civil aviation travel witnessed a substantial growth of approximately 60% across the U.S., Europe, and Latin American regions during the first quarter of 2022. The Asia Pacific market is experiencing a slow recovery as one of the significant contributors to the aviation industry, China is still following the zero-COVID policy with Beijing and Shanghai tightening restrictions on business and travel, which is expected to impact flight simulator sales.

Key industry participants emphasize on integrating with technology providers to enhance product offerings and reduce time-to-market. Suppliers tend to make continuous efforts to improve Aircraft Simulation Technology (AST) in order to offer superior products. Notable companies in the market integrate with technology providers in order to enhance product offerings and reduce product time to market. Companies also support an interface to the third-party flight simulator which is an open source software generally available through a GNU General Public License (GPL). For example, CAE has developed an in-house R&D department which makes continuous efforts to develop world-leading simulation technologies and a record of service and technology innovation.

The report forecasts revenue growth at global, regional, and country levels and provides an analysis of the latest industry trends in each of the sub-segments from 2016 to 2027. For the purpose of this study, Grand View Research has segmented the global flight simulator market report based on product, application, and region: 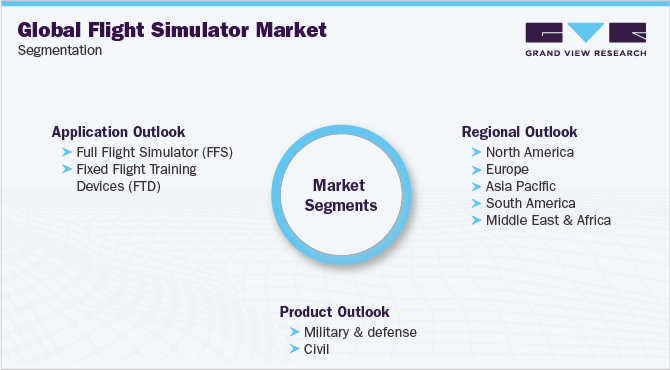 How big is the flight simulator market?

What is the flight simulator market growth?

Which segment accounted for the largest flight simulator market share?

b. Europe dominated the flight simulator market with a share of 32.0% in 2019. This is attributable to the availability of advanced military and commercial infrastructure in the region.

Who are the key players in flight simulator market?

What are the factors driving the flight simulator market?

b. Key factors that are driving the market growth include rising demand for better and effective pilot training coupled with the growing importance of aircraft safety, as well as the need for substantial training.