The global thermal energy storage market size was valued at USD 4.1 billion in 2019 and is projected to grow at a compound annual growth rate (CAGR) of 9.45% from 2020 to 2027. Shifting preference towards renewable energy generation, including concentrated solar power, and rising demand for thermal energy storage (TES) systems in HVAC are among the key factors propelling the industry growth. Growing need for enhanced energy efficiency, coupled with continuing energy utilization efforts, will positively influence the thermal energy storage demand. For instance, in September 2018, the Canadian government updated a financial incentive plan “Commercial Energy Conservation and Efficiency Program” that offers USD 15,000 worth rebates for commercial sector energy upgrades. 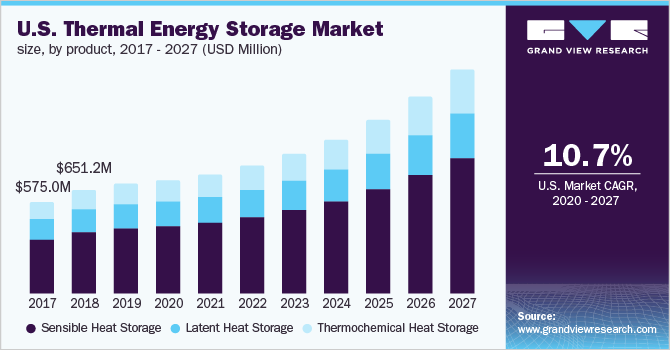 The market in the U.S. is projected to witness substantial growth in the forthcoming years on account of increasing number of thermal energy storage projects across the country. For instance, in 2018, the U.S. accounted for 33% of the 18 under construction projects and 41% of the total 1,361 operational projects globally. Presence of major industry players in the country is expected to further propel the TES market growth in the U.S.

The U.S. Department of Energy (DoE) evaluates thermal energy storage systems for their safety, reliability, cost-effective nature, and adherence to environmental regulations and industry standards. It also stated that Europe and the Asia Pacific display higher fractions of grid energy storage as compared to North America. Rising need for a future with clean energy is prompting governments across the globe to take efforts towards developing innovative energy storage systems.

The primary challenge faced by the thermal energy storage sector is the economical storage of energy. An important advancement in this sector has been the usage of lithium-ion batteries. These batteries exhibit high energy density and long lifespans of 500 deep cycles, i.e. the number of times they can be charged from 20% to their full capacity before witnessing a deterioration in performance. They can also be utilized in electric vehicles, district cooling and heating, and power generation.

Governments, associations, universities across the globe are taking various steps to invest actively in R&D, to come up with innovative storage mediums which have a low or zero impact on the environment. The ongoing R&D is also focused on implementing the thermal energy storage techniques to be implemented in building walls by employing the PCMs in air vents and plasters. The increasing government initiatives coupled with technological advancement initiatives adopted by various vendors are anticipated to boost the market over the forecast period. Also, efforts are being taken to utilize thermal energy for transportation purposes as well.

Rise in environmental concerns regarding increase in carbon emissions owing to usage of conventional fuels for power generation purpose have resulted countries around the world to opt towards cleaner and efficient sources of power. Further, many countries in North American, European and Asia Pacific region have given impetus to growth of clean energy technologies in the long-term goals of respective countries.

Renewable power generation and green energy storage has emerged as some of the major alternative to fossil fuels, thus reducing the dependency on them. This, in turn, has resulted as a viable solution for countries around the world to opt for them to meet their carbon reduction targets and to make a switch towards cleaner energy technologies. Rise in deployment of renewable energy in the last decade has been witnessed on account of these scenarios. However, renewable energy sources such as solar and wind have intermittent nature of supply. To counter this intermittency nature of large-scale renewable deployment, thermal energy storage systems provide a viable solution as they can be integrated with CSP projects.

Sensible heat storage accounted for the largest revenue share of 46.2% in 2019. This can be attributed to rising demand for solar thermal systems, along with applicability across large scale HVAC systems. Provision of reversible charging and discharging facility for an infinite number of cycles is a key feature of the technology that will further enhance the product penetration.

The thermochemical heat storage segment is anticipated to exhibit the fastest CAGR of 13.8% over the forecast period. In this storage, the heat stored by different mediums is released when a reverse reaction takes place between them. Thermochemical storage systems provide high energy density as compared to latent or sensible heat storage systems. This form of heat storage is preferable for long-term storage as losses do not occur overtime, but only during charging and discharging phases.

Molten salt technology occupied the largest revenue share of 31.1% in 2019 and is expected to witness significant growth over the forecast period. The growth of the segment can be attributed to its high technological efficiency, along with its usage in several solar energy projects. Molten salt is used to store the heat collected by means of solar troughs and solar towers. The heat collected by means of this technology is used to enable steam turbines by converting it to superheat steam.

Ice-based technology is anticipated to grow at a significant rate over the forecast period. Ice is used in ice storage air conditioning for the storage of thermal energy. The process is highly feasible as the heat of fusion of water is sufficiently high and can contain approximately 317,000 BTU or 334 mega joules (MJ) of energy in one metric ton of water. This energy is equivalent to approximately 26.5 ton-hours or 93 kWh. This application can be utilized to provide chilled water and air conditioning to a large number of commercial and residential buildings.

The industrial segment accounted for the largest revenue share of 39.7% in 2019 and is projected to maintain its lead over the forecast period. Rising spending on infrastructure development and establishment will propel the demand for HVAC systems, which, in turn, will drive the industrial segment. Furthermore, growing adoption of these systems across several industries using large quantities of hot water for economic purposes will boost the segment growth. 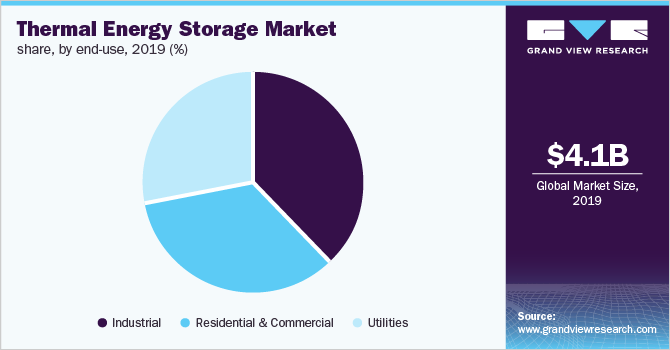 The utilities segment is expected to witness the fastest growth over the forecast period. The segment comprises public services, such as broadband internet, transportation, telephone, sewage, water, natural gas, and electricity. Thermal energy is utilized to provide these public services at an extremely low cost. Cogeneration plants are employed to derive thermal energy and then convert it to the required form of energy.

Water is the most commonly utilized material to store heat energy as it has a heat capacity of 4.2 J/(cms.K), which is considered to be one of the highest. It is often utilized in systems such as heat storage tanks, pebbles, concrete, and hot rocks. The steam generated is then utilized to power the turbines, which eventually generate low cost and efficient electricity.

The district heating and cooling segment accounted for the largest revenue share of 35.2% in 2019. The application of district cooling and heating is utilized to distribute the generated power in order to suffice commercial and residential requirements. This distributed energy is utilized for water heating, space heating, and air conditioning. The stored power is derived in cogeneration plants by burning biomass and fossil fuels. Various systems utilized for the generation of energy for district heating and cooling applications include central solar power and boiler stations.

Thermal energy is utilized for process heating and cooling application in order to change the chemical and physical properties of the desired material. Heat treatment is utilized for metalworking, industrial, and manufacturing processes. These processes require extreme cooling and heating in order to harden or soften the desired material. Various types of process include quenching, normalizing, tempering, strengthening, precipitation, case hardening, and annealing.

Europe accounted for the largest revenue share of 30.1% in 2019 and is projected to maintain its lead over the forecast period. The region is characterized by a large number of thermal energy storage systems, which are utilized for space heating, water heating, district heating and cooling, and power generation. Spain is the largest contributor to the regional market growth owing to the large number of operational TES projects across the country, along with presence of major players, such as Abengoa Solar.

The government of Europe has developed a model which stores and distributes the energy as per the density of population in a specific region. This model is widely known as the European model. The federal government of Germany heavily invests in advanced research for the electrical energy storage field, pertaining to the storage field’s use in solar panels utilized for residential purposes. 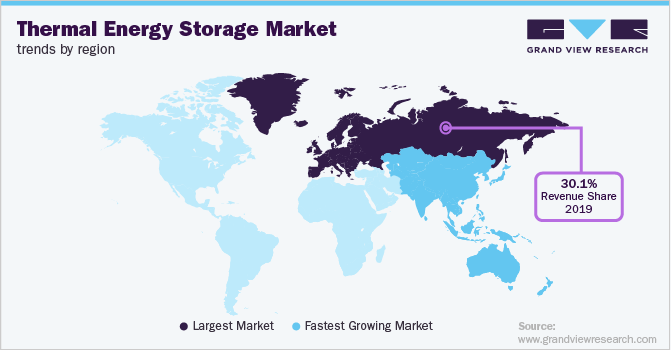 North America accounted for the second largest revenue share in 2019 owing to reduction in requirement for more extensive generation equipment during peak hour demand. Positive outlook towards renewable based power generation, along with increasing research and development activities aimed at energy storage systems, will augment the U.S. market growth.

The Government of the State of New York has established the Battery and Energy Storage Technology (NY-BEST) commercialization and test center in Rochester. The facility encompasses an area of 18,000 sq. ft. and costed approximately USD 23 million. The facility includes a collaboration of Rensselaer Polytechnic Institute, Troy, and Cornell University, Ithaca, which pull their resources together for validating various forms of energy storage for residential & commercial use.

The market in the Asia Pacific is anticipated to expand at the highest CAGR of 14.3% over the forecast period. Developing nations such as China, India, South Korea, Japan, Indonesia, and Malaysia are witnessing rapid growth in urbanization and population. These developing nations have many unreliable power grids and fundamental infrastructure systems. This factor is expected to compel industry participants to invest in these nations, and thus boost the growth of installations of thermal energy storage and distribution grids.

In India, the solar energy system capacity addition in 2017-18 was greater than that of all other energy sources, both renewable and conventional. The onshore wind energy capacity also experienced an increase in the region. Coal and wind energy added 4.6GW and 1.7GW respectively in 2017-18. The developing nation is expected to witness a rise in its thermal energy storage systems over the forecast period.

Industry participants are integrating advanced technologies into the existing technology to enhance the product demand through the provision of improved thermal energy management systems. Furthermore, eminent players are emphasizing on inorganic growth ventures as a part of their strategic expansion. Some of the prominent players in the global thermal energy storage market include:

This report forecasts revenue growth at the global, regional, and country levels and provides an analysis on the latest industry trends and opportunities in each of the sub-segments from 2016 to 2027. For the purpose of this study, Grand View Research has segmented the global thermal energy storage market report on the basis of product type, technology, storage material, application, end user, and region: 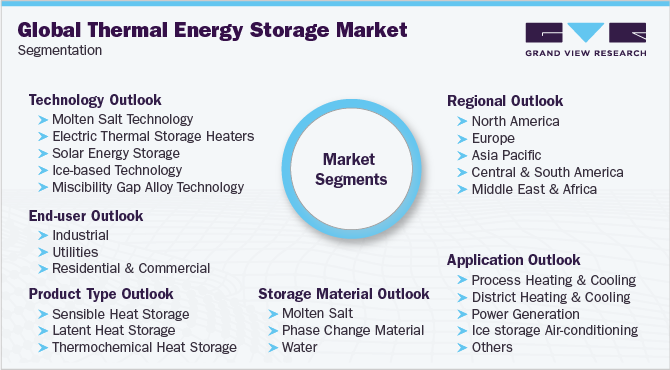 How big is the thermal energy storage market?

What is the thermal energy storage market growth?

b. Sensible heat storage was the largest segment accounting for 46.22% of the total volume in 2019 owing to applicability across large scale heating, ventilation, and air conditioning (HVAC) systems.

Who are the key players in thermal energy storage market?

What are the factors driving the thermal energy storage market?