The global thermoplastic polyester elastomer market size was estimated at USD 845.2 million in 2016. Rising substitution of thermosets and other conventionally heavy materials such as metals and wood is expected to remain a key driving factor for the industry over the forecast period.

The industry has remained a relative niche segment in the global thermoplastic elastomers market, on account of low manufacturer & consumer awareness and the vast platform of homopolymers and copolyester types included under the overall umbrella of TPEs. However, these small families of high-performance plastics are rapidly gaining attention in the industry owing to good dimensional stability, and high stiffness among other properties. 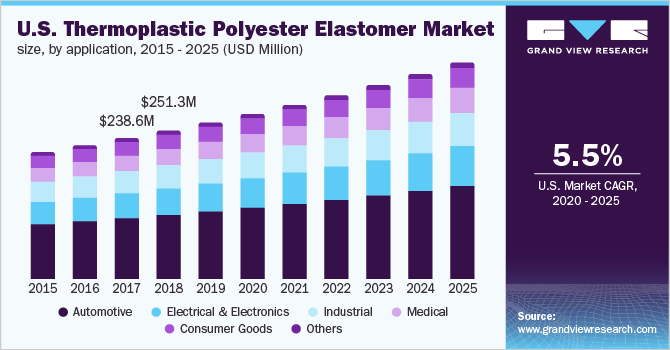 Other uncertainties in the industry arise from differing brand names among numerous suppliers and lack of knowledge regarding the exact applications of each TPE type. Additionally, the polyester supply chain has also witnessed numerous restructuring and divestment activities owing to supplier discrepancies. These factors have hampered industry growth to some extent.

However, the ability of all TPEs to process like thermoplastics and imitate the texture & performance of thermoset rubbers has made them ace demanding application trials over the last decade. Thermoplastic polyester elastomer (TPEE) products are also gaining favor on account of their faster processing & lower scrap or wastage rates.

Numerous automobile manufacturers are integrating these materials into high-performance components, such as the recently developed DuPont Hytrel which can flex in multiple directions through several cyclic processes. The product is currently utilized in the Constant Velocity Joint (CVJ) boot, an automotive component that is subject to an average of 150,000 miles of pounding, and a wide range of temperatures.

Engineering applications necessitate a fine equilibrium between performance & cost. Mechanical, electrical, thermal, and other physical properties determine the selection of polymers, which is either polybutylene terephthalate (PBT) or polyethylene terephthalate (PET).

PBT elastomers are particularly well-suited to injection molding, and consequently, the process is responsible for the majority of its consumption. TPEE is also consumed in extrusion processes, typically for cable & wire or fiber optics. PET similarly possesses excellent color stability, creep even at elevated temperatures, and wear properties.

Around 90% of resins are compounded with reinforcements, fillers, and other additives. This blurs the distinction between base resin properties of each polymer, yet the process is also responsible for technological developments in FDA-acceptable and flame-retardant blends. Novel alloys combining the properties of polyesters with polycarbonates have also been developed and may witness widespread commercialization over the forecast period.

Other automotive applications such as connectors, plugs, and housing components that must endure increasingly stressful demands of the industry are also being molded. Polyester resins have benefited from improvements in mold design, a better understanding of flow behavior in molds, increased robotics, and increased computer simulation, which has improved the efficiency and economics of the production of large, molded parts. 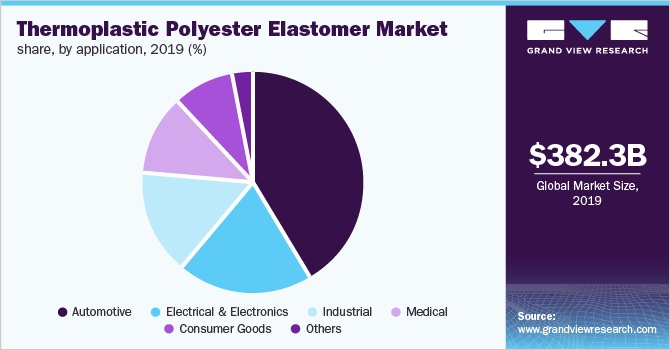 Electronics accounted for about 19% of the share in 2016 and is expected to grow at over 4.2% CAGR from 2017 to 2025. Manufacturers are utilizing compounds with electrical insulation properties & inherent high heat distortion temperatures for components such as circuit breakers, switches, connectors, and housings in the home appliance market.

The telecommunications and IT sector have similar uses for these polymers, notably used in mobile phone casings to lower weight & foster miniaturization. Furthermore, developments in injection molding and similar techniques are driving the demand for stronger grades in the sector.

Medical & healthcare expenditure has also risen considerably in recent years, driving the need for faster processing of lightweight & durable medical devices & equipment. The segment is anticipated to grow at an exponential pace especially in emerging markets such as India, Indonesia, Thailand, Argentina & Mexico among others.

Specialized impact-modified compounds find in usage across a range of consumer goods that include convenience products, consumer durables, and soft goods. Sales of these goods are highly dependent on the buying habits of the consumer and hence the latter has a huge impact on TPEE production dynamics in the application.

China, India, and Southeast Asia are expected to be the primary growth markets in the Asia Pacific. The growing manufacturing sector shall drive TPEE compounds to demand in automotive, industrial machinery, packaging, and electrical & electronics industries. The Asia Pacific occupied the largest share of over 30% volume in 2016 and the thermoplastic polyester elastomer market is steadily growing at over 5.7% CAGR.

Europe is anticipated to remain an important market, with over 24% of the revenue share in 2016. Though the region’s growth is likely to be restrained due to various macro-environmental factors such as debt crisis, rising unemployment, and stalled industrial output, an optimistic scenario across Eastern Europe for manufacturing and consumerism shall drive its growth. The region is characterized by stringent environmental regulations from agencies such as ECHA, the European Commission, and various federal level agencies.

North America is also likely to remain a key player in numerous automobile manufacturers preferring plastic vehicle parts, which help the company to achieve low-cost production and increase its bottom line. The region is a slow-growing market owing to saturation of end-use industries and relatively lower customer base as compared to the Asia Pacific.

Other emerging economies such as Central & South America (CSA) and Middle East & Africa (MEA) are also growing at high rates similar to the Asia Pacific; these regions benefit from expanding end-use industries and relatively low penetration of thermoplastic compounds as compared to other regions.

The industry is characterized by numerous large players who provide large lines of thermoplastic compounds, including renowned brands such as Hytrel by DuPont and Pebax by Arkema. Technological & product innovation are key differentiation factors for these and other smaller companies across the globe.

Innovative compounding & extrusion techniques are also projected to revolutionize the industry, with a large number of players introducing process & cost-efficient methods to reduce wastage and improve end-product quality. Suppliers are responding with higher-performing materials and extended functionality as well.

This report forecasts revenue growth at global, regional & country levels and provides an analysis of the industry trends in each of the sub-segments from 2014 to 2025. For this study, Grand View Research has segmented the global thermoplastic polyester elastomer market based on end-use and region: