The global tissue engineering market size was valued at around USD 5 billion in 2016 and is expected to grow at a healthy growth rate. Growing potential of tissue engineering procedures in the treatment tissue damages is supporting the market growth.

Tissue engineering can provide solutions that can replace the currently used tissue repair solutions including transplants, surgical reconstruction, and mechanical devices. In addition, the need for effective regenerative treatments is on the rise pertaining to the rapidly aging population, growing lifestyle disorders such as obesity and diabetes, and growth in trauma cases.

According to the Regenerative Medicine Foundation, there are around 1.3 million cases of breast cancer each year. In addition, over 1.5 million people are diagnosed with Parkinson’s disease in the U.S. According to the U.S. Centers of Medicare and Medicaid, more than 900,000 surgeries are performed in the U.S. for bone reconstruction or replacement.

The number of people in need of bone implants is on the rise owing to the increasing cases of chronic diseases, trauma cases, and growing average life span.

3D tissue engineering has been evolving rapidly and the technological advancements in this field include replacement of embryo cells with proliferative stem cells, organ-on-a-chip technologies and use of 3D bio-printers to design in-vitro implants. NIH provided research funding worth USD 445 million to human non-embryonic stem cell research and USD 180 million to human embryonic stem cell research. The government funding for ongoing research will accelerate the tissue engineering market growth in the coming years.

Application of nanotechnology is crucial in tissue engineering process to study cell interaction at a single molecule level. It involves cell culturing in different types of media and allows the cells to grow on scaffolds to get 3-dimensional tissues. Nanoscale topography is used to enhance tissue growth with the help of nano-featured scaffolds. Combination of nanotechnology and biomedicine has resulted in wide range of innovative solutions for repair and generation of tissues and organs.

The National Science Foundation in the U.S. awarded USD 3 million to create a new nanotechnology research facility at the Montana State University in 2015, as a part of the U.S. national efforts to encourage research in the field of nanotechnology. In February 2016, Sernova Corp. received USD 625,359 from the EU Horizon 2020 Program to develop the cell-based hemophilia therapeutics. The Horizon 2020 is an EU research and innovation program that funds around USD 88 billion available from 2014 to 2022.

Based on applications, the market is grouped into cord blood & cell banking, cancer, GI& gynecology, dental, skin/integumentary, urology, orthopedics, musculoskeletal, spine, neurology, cardiology & vascular segments. The segment orthopedics, musculoskeletal, and spine held majority of the market share in the year 2014 owing to the rising musculoskeletal disorders. Approximately 15 million fracture cases occur in the U.S. each year, which include over 2 million osteoporotic fractures and 1.6 million hospital admissions for traumatic fractures. This accounts for financial healthcare burden worth USD 60 billion.

The cardiology and vascular segment is expected to witness the fastest growth rate over the forecast period owing to the rapidly increasing prevalence of cardiovascular diseases across the globe. Despite of various technological advancements in this field, cardiovascular disorders are one of the leading causes of death globally. Advancements in tissue engineering are likely to boost the market growth. For instance, development of 3D Engineered Heart Tissue (EHT) has gained attention due to the advancements in stem cell biology, nanotechnology, and material science.

North American held the majority of revenue share in the year 2014, owing to technological advancements in this region along with increasing awareness about the treatment options. The U.S. has the highest per capita healthcare expenditure, which is funded by the NIH. According to the U.S. Department of Health and Human services, approximately USD 4 billion in private capital has been invested in regenerative medicine in 2014. 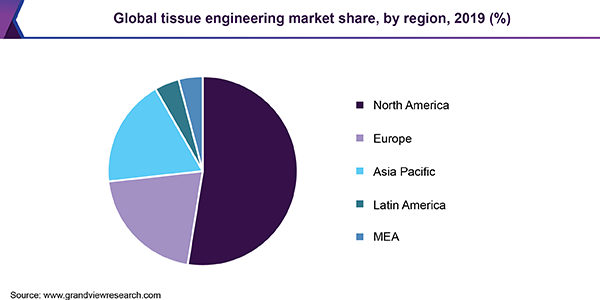 Asia Pacific regional segment is expected to showcase the fastest growth over the forecast period. The demand for regenerative market is increasing in Japan, China, and India. Growth in medical tourism in Asia Pacific will accelerate the market growth. Some of the major industry players are entering this region to collaborate with biotechnology companies to expand their regional presence. In 2015, Chugai and Athersys collaborated to develop a stem cell therapy for ischemic stroke disease. The partnership will help Athersys based in the U.S. to leverage on the clinical efficiencies of Japan.

In October 2015, India signed an agreement with Germany to collaborate on the development of science and technology in the country. Under this agreement, the tenure of the Indo-German Science & Technology Center was extended up to 2017 and the funds increased from USD 2.22 million to USD 4.44 million per year. The initiative focused on the development of regenerative medicine and on making it affordable for developing countries.

Companies are now entering into collaborations to gain advantages on research and technology competencies offered by other competitors. In December 2015, Acelity acquired SNaP Therapy System from Spiracur. Through this acquisition, Acelity is expecting to enter the acute wound care market and to expand its product portfolio. In addition, many companies are upgrading product portfolios to meet the current demand. For instance, in December 2015, the FDA approved Medtronics bone graft.

This report forecasts revenue growth and provides an analysis of the industry trends in each of the sub-segments from 2014 to 2025. For the purpose of this study, Grand View Research has segmented the global tissue engineering market report based on application and region: