The global transcatheter devices market size was valued at USD 7,763.3 million in 2018 and is projected to grow at a CAGR of 12.1% over the forecast period. The increasing demand for Minimally Invasive Procedures/Surgeries (MIS) is one of the key factors propelling the market growth. These procedures cause lesser trauma to the patient and facilitate quicker recovery than invasive procedures such as open-heart surgeries. MIS require relatively lesser hospital stays, hence provide better patient outcomes and economic viability from both micro and macro perspective. Moreover, it involves lesser number of post-surgery complications and lower mortality rates, owing to which, these surgeries are preferred by healthcare practitioners as well as patients. An increased usage of such less invasive surgical procedures has been observed in various fields such as gynecology, urology, neurosurgery, gastrointestinal surgeries, cardiology, and pulmonary medicines.

Transcatheter aortic valve replacement (TAVR) is a minimally invasive surgery for replacement of damaged or diseased valve. According to NCBI, some of the market leaders believe that TAVR has potential to replace conventional aortic valve replacement (AVR) and will emerge as a new gold standard procedure for the treatment of aortic stenosis. TAVR are less invasive than conventional AVR and the rate of comorbidities & mortality are significantly low for high-risk symptomatic patients. Awareness about these minimally invasive surgeries and associated advantages is rising globally, owing to which the number of TAVR surgeries is expected to increase in the following years. 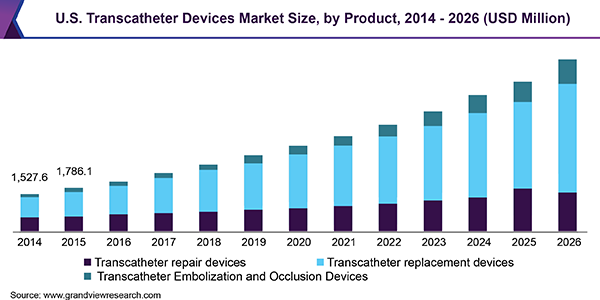 Favorable insurance policies and reimbursement scenario is one of the crucial factors, which is anticipated to drive the market in the following years. The growing number of approvals and increasing number of sponsors for TAVR and TMVR procedures in this market are some of the factors, which are also contributing to improved coverage. For instance, the Centers for Medicare & Medicaid Services (CMS) announced that it had issued coverage of TAVR under the Medicare National Coverage Determination policy.

Various initiatives are being undertaken to increase awareness about TAVR and TMVR procedures. The STS/ACC TVT Registry is a collaborative initiative by Society of Thoracic Surgeons (STS) and American College of Cardiology to monitor real-world outcomes and patient safety pertaining to transcatheter valve repair and replacement surgeries. This registry is approved by CMS and provides insights about patient outcomes & guidelines for replacement and repair procedures.

Edwards Lifesciences Foundation is a sponsor of Valvular Disease Education Center and Ambassador Program, American Heart Association in the U.S. The Heart Valve CareLine is a free patient hotline that provides professional assistance to patients. It also provides guidance on the insurance and reimbursement system. This initiative was funded by Edwards Lifesciences Foundation.

In 2018, transcatheter replacement devices emerged as the key potential segment, mainly owing to the presence of highest number of commercialized products in the market. The transcatheter aortic valve replacement (TAVR) devices followed by transcatheter mitral valve replacement accounts for the highest revenue share among the replacement devices due to increasing mergers & acquisitions, collaborations, and growing funding for the research & development to offer effective treatment and reduce complications. For instance, in 2019, Abbott received a FDA approval for its fourth-generation MitraClip device - MitraClip G4 that offers physicians in the U.S. with an extensive range of clip sizes, and facilitates real time assessment of procedure, thereby enabling doctors to efficiently treat mitral valve disease.

These devices are majorly expected to enhance the treatment of cases suffering from mitral valve regurgitation, and symptomatic aortic valve stenosis globally. This product launch will help the company to strengthen its product offerings for transcatheter devices, thus enabling the Abbott to account for majority share of the global market over coming few years.

In 2018, cardiovascular is the largest application segment with a revenue share of 56.9%. Increasing patient pool of fatal cardiac disorders, such as mitral regurgitation, aortic stenosis, and tricuspid regurgitation over the globe is projected to boost the segment growth. Improvements in cardiac complications along with significant reductions in mortality with the usage of latest fourth-generation TAVR systems is another factor driving application of transcatheter devices in cardiovascular space.

Additionally, several clinical trials that have been conducted to demonstrate significance of transcatheter valve replacement therapy to treat inoperable patients with aortic stenosis or various valvular diseases have led to increased adoption of transcatheter technology across the U.S. and EU countries. For instance, PARTNER II clinical trial associated with the Edwards Sapien 3 study that involved more than 1000 patients at approximately 50 locations in the U.S. and Canada, has demonstrated positive outcomes for various primary parameter such as mortality, stroke, and the capability to treat moderate-to-severe valve regurgitation. 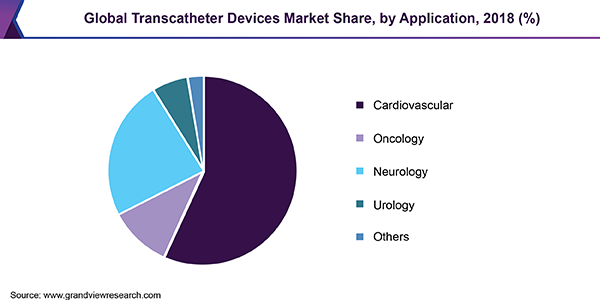 However, revenue share in oncology segment is expected to grow at a highest growth rate over the forecast period. The transcatheter embolization devices register major use in oncology owing to the embolization technique being an effective and popular treatment for patients with different cancers such as kidney, pancreatic, breast and liver cancer. Among these, liver cancer is the most common cancer type that is treated using embolization and occlusion devices.

In 2018, North America accounted for the highest revenue share in transcatheter devices market. Growing geriatric population, rising prevalence of valvular diseases in the geriatric population, increasing healthcare expenditure, and rising preference for minimally invasive surgeries are some of the major factors driving the market growth. Due to the growing geriatric population at high risk for open surgery, the number of transcatheter valve replacement procedures are rising in this population. Moreover, growing preference for transcatheter replacement or repair procedures over open heart surgery coupled with presence of favorable government initiatives and reimbursement policies are some of the crucial factors responsible for the largest revenue share.

The U.S. accounts for the highest revenue share in North America market in 2018 owing to the increasing prevalence of heart diseases, accounting for approximately 0.6 million deaths every year. In 2011, nearly 40 million people in the U.S. were above 65 and above, which is anticipated to increase to 89 million by 2050. This population subset is more prone to valvular diseases such as aortic stenosis, tricuspid and mitral regurgitation. Therefore, the demand for transcatheter devices is expected to boost in the U.S. over the forecast years.

However, Asia Pacific is anticipated to be the most lucrative market accounting for a CAGR of 13.8% during the forecast period. Growing interest among private companies to invest in this market and favorable government policies for cardiovascular diseases are some of the factors that are anticipated to boost the Asia Pacific market growth over the forecast period. However, despite presence of a large patient pool in this region, the current adoption of advanced valve replacement surgeries is low due to high costs associated with transcatheter replacement and repair devices.

CryoLife, Inc., Edwards Lifesciences Corporation, Abbott, Boston Scientific Corporation, JenaValve Technology, Inc., Terumo Corporation, Neovasc Inc., and Meril Lifesciences Pvt. Ltd. are among few key players that accounts for majority of the market share due to their extensive product portfolios, strong global footprint, and increased investment in research and development to develop advanced transcatheter devices. Moreover, the increase in demand with the introduction of transcatheter device for tricuspid repair and mitral valve repair by key vendors such as Edwards Lifesciences and Abbott, respectively, is another key factor driving revenue growth in the market.

This report forecasts revenue growth at global, regional, & country levels and provides an analysis on industry trends in each of the subsegments from 2014 to 2026. For the purpose of this study, Grand View Research, Inc. has segmented the global transcatheter devices market report on the basis of product, application, and region: