The global transplantation market size was estimated at USD 23.5 billion in 2016. Growing demand for novel tissue transplantation products and organ transplantation for the treatment of organ failure, is a major factor contributing toward growth of the market.

Organ failure usually occurs due to various factors such as serious trauma, loss of blood, poisoning, drug abuse, leukemia, sepsis, and other acute diseases. Demand for tissue and organ transplantation, mainly kidney, heart, liver, and lungs, is very high globally. Unhealthy dietary habits, alcohol consumption, lack of exercise, and drug abuse are some leading causes of organ failure. Thus, demand for transplantation products is expected to rise in the near future.

The global increase in the demand for organs for transplant can be attributed to increase in the incidence of acute diseases, which in turn results in an increase in the number of organ failures. For instance, diabetes and high blood pressure are the most common causes of end-stage renal disease, where kidney transplant or dialysis are the only treatment options to keep a patient alive. According to National Kidney Foundation, there were around 122,737 patients in the U.S. waiting to receive organs for transplant in 2014. Thus, there is high demand for advance transplantation products for the treatment of organ failure.

Some of the major driving factors impacting the market are introduction of technology advanced products and increasing number of tissue banks. However, some of factors such as shortage of organ donors for transplantation procedures are expected to restrain market growth. There is huge gap between demand and supply of organs for organ failure treatment. According to Health Resources and Services Administration, till May 2017, there were around 117,829 patients waiting for organ transplants in the U.S., among them about 97,610 were waiting for kidney transplants. However, only 11,061 transplant procedures were performed from January to April 2017. Lack of awareness for organ donation and religious & customary beliefs prevent a large number of people from donation. Thus, the shortage of organs for the treatment of organ failure is expected to adversely affect the market growth.

Major products used for tissue or organ transplantation are tissue products, immunosuppressants, and preservation solutions. Tissue products was the highest revenue-generating segment in 2016. The increasing number of transplantation procedures such as that of cochlear, heart valves, bone marrow, and orthopedic soft tissues is attributing to the growth of the segment. In addition, new product development is also fueling the market growth. For instance, in September 2015, Arthrex Inc. launched ArthroFlex Acellular Dermal Matrix, a new orthobiologic product that is intended for use in capsular reconstruction. This product allows retention of its growth factors and native collagen scaffold and elastin and allows transplant to be successfully incorporated into the receiver

Manufacturers are focusing on new product development, mergers & acquisition, and collaborations to expand their current product portfolio and reinforce their position in the industry. For instance, in September 2016, Stryker Corporation announced the acquisition of Instratek, a leading manufacturer of minimally invasive soft tissue recession instruments for the ankle, foot, and upper extremity procedures.

Immunosuppressive drugs segment is projected to showcase lucrative growth during the study period. This can be attributed to high usage of these drugs to prevent post-transplant tissue or organ rejection. The increasing prevalence of chronic diseases has led to rise in demand for organ replacement globally. Thus, demand for immunosuppressive drugs is expected to rise at a significant pace during the forecast period.

The preservation solutions segment is expected to exhibit significant growth during the study period due to rising government support for stem cell research and high application of these products to improve physiological function of organs. In addition, rising cases of organ failure, increasing organ transplant procedures, and escalating number of organ donations worldwide expected to drive the segment growth.

Tissue transplantation was the largest revenue-grossing segment of the overall market in 2016. This is due to the fact that replacement of skin, cornea, bones, heart valves, tendons, nerves, and veins are most commonly performed procedures worldwide. The escalating number of burn and accident cases is expected to propel the demand for tissue products. According to CDC, around 28.1 million people visited emergency department visits due to unintentional injuries in 2013.

The organ transplantation segment is expected to grow at significant growth rate during the forecast period. Increasing number of organ transplantations globally as well as repetitive purchase of immunosuppressants is anticipated to boost market growth in the near future. For instance, in 2015, around 84,347 kidney transplant procedures were performed globally. 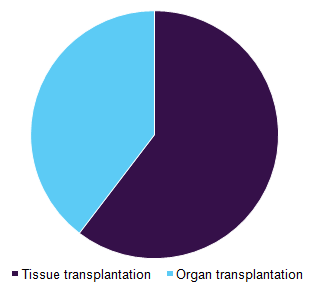 Advancement in transplantation technology and launch of new products by manufacturers is expected to propel the number of transplant procedures, including kidney, liver, heart, lungs, and tissues. For instance, in September 2015, Arthrex, Inc. announced the launch of ArthroFlex Acellular Dermal Matrix, which provides high strength and support to restore stability in capsular reconstruction.

In 2016, high number of transplant procedures was documented in the U.S., Germany, U.K., and France, and this number is expected to increase in the near future. Thus, there is high demand for transplantation products in these countries. Well-developed healthcare infrastructure and availability of expert surgeons & advanced products in these countries are some key factors that can be attributed to growth of the regional market.

Hospitals held the largest market share in the year 2016. Large number of organ and tissue transplant procedures are conducted at hospitals as they are primary treatment centers. Additionally, emergence of hospitals with developed infrastructure is further expected to fuel market growth. Majority of these hospitals have access to well-defined databases to check for availability of organs aiding in rapid medical intervention.

The number of transplant centers is expected to exhibit highest growth over the forecast period. Escalating transplantation procedures have triggered the need for increased number of healthcare centers catering to the unmet needs of the patients. Also, rising government initiatives to encourage organ donation is projected to propel the market growth. For instance, Health Resources and Services Administration's Division of Transplantation sponsored four grant programs that focuses on increasing the number of organs donors and transplant procedures.

Rising number of organ donors and improving healthcare infrastructure in developing economies such as China, India, Argentina, and Brazil are expected to propel market growth. In addition, demand for these products in these countries is rising due to growing burden of acute and chronic diseases, such as high blood pressure and diabetes.

In 2016, North America dominated the transplantation market and is expected to maintain its dominance throughout the study period. Well-developed healthcare facilities and local presence of many large biotechnology and medical devices companies, such as Arthrex, Inc.; Zimmer Biomet; Medtronic; Novartis AG; and Stryker is supporting the market growth.

The gap between demand and supply of organs, including kidney, liver, and heart, for transplantation has increased in the last decade. However, governments and NGOs of various countries are taking initiatives to encourage people to donate organs and save lives. New guidelines and rules for organ donation make the donation process more transparent and easy. In 2013, the Australian Government conducted a national reform program to increase organ donation and transplant. This led to an increase in the number of organ donations from the previous year.

Asia Pacific market is projected to grow at the highest rate during the forecast period, owing to the growing research on stem cells to develop invitro tissue and organs as well as developing healthcare infrastructure in Asian countries such as India, Thailand, Philippines, Indonesia.

Leading players are involved in launching new products, mergers & acquisitions, and regional expansion to gain maximum revenue share in the industry. Mergers and acquisitions support vendors in expanding their existing product portfolio and geographical reach. For instance, in June 2015, Zimmer Holdings, Inc. announced the acquisition of Biomet to strengthen their product portfolio and distribution channels.

Rising regulatory approvals for allografts, autologous grafts, and other materials along with development of innovative products, such as 3D bioprinting, has led to high demand for transplant products. This 3D bioprinting can be used to regenerate tissues and organs. For instance, Organovo Holdings, Inc., a 3D biology company, announced in January 2014 that it completed its first 3D Liver tissue delivery.

This report forecasts revenue growth at global, regional & country levels and provides an analysis on industry trends in each sub-segment from 2014 to 2025. For the purpose of this study, Grand View Research has segmented the global transplantation market on the basis of product, application, end-use, and region: