The global trocars market size was valued at USD 681.5 million in 2017. It is anticipated to expand at a CAGR of 4.3% over the forecast period. Demand for trocars is experiencing an upswing due to growing reliance on laparoscopy, favorable reimbursement policies, and increasing geriatric population. Rising prevalence of chronic conditions such as urological and gynecological disorders is also poised to stoke the growth of the market. 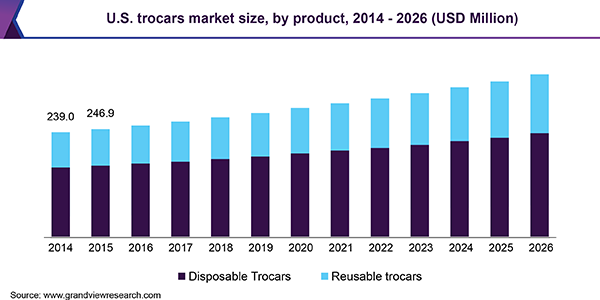 Based on tips, the market is segmented into bladeless, optical, blunt, and bladed trocars. Bladeless trocars are likely to be the most prominent segment in the market during the forecast period. Versatile applicability, flexible usage, and unique mode of entry in the abdominal cavity during laparoscopic surgeries are the major factors escalating the growth of the segment. Also, ease of usage and less chance of getting an infection is expected to spur the growth of the segment.

Laparoscopic methodologies bring down the danger of postoperative contaminations, guarantees rapid recuperation, allows short time discharge from hospitals, shows rapid outcome, and also lowers the chance of gaining any further complications. There is a growing inclination towards trocars and cannula with the developing dependence on laparoscopy as they are broadly used to embed a laparoscope to get the view of internal body structures. Partially collapsed lungs, pain, blood clumps, exhaustion, muscle decay, and contaminations are some of the common postoperative complexities of traditional open surgeries. Due to these complexities, surgeons prefer to utilize a laparoscopic methodology to conventional open surgeries, since it offers rapid recovery with minimal chance of post-operative infections.

Also, in recent times, these surgeries are used in some cases of gynecological problems. Surgeons recommend gynecologic laparoscopy in place of open surgery as trocars used during this type of surgery allow a detailed internal view of the pelvic area. The widening base of geriatric population is leading to increased demand for surgeries. This, in turn, is working in favor of the market.

The optical trocars segment is anticipated to register the highest CAGR during the same period owing to factors such as a detailed view of tissues and an increasing number of laparoscopic surgeries being performed. Also, benefits offered by this product include safe and rapid initial placement of trocars, which is poised to drive the growth of the segment.

Based on the application, the market is segmented into general, gynecological, urological, pediatric, and other surgeries. Laparoscopic gynecologic surgeries are now being practiced widely owing to their several advantages such as precise and detailed view of the pelvic area, low chance of getting post infections compared to conventional surgeries, and rapid healing. However, general surgery is likely to post the highest CAGR during the forecast period owing to lesser healing time when compared to traditional surgeries and increasing reliance on minimally invasive surgeries.

Based on product type, the trocars market is bifurcated into disposable and reusable trocars. Disposable trocars are the more preferred ones. The segment is estimated to dominate the market throughout the forecast horizon, owing to increasing penetration of laparoscopic surgery. Also, benefits offered by them, such as lower post-operative infection and ease of usage, are contributing to the growth of the segment. 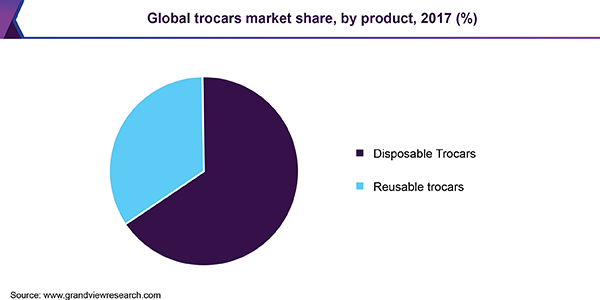 North America is expected to command the leading share in the market through 2025. The region is anticipated to be followed by Europe during the same period. Increasing preference for laparoscopic surgeries to open surgeries and swelling competition among prominent market participants in terms of product innovation are augmenting the market in North America. The U.S. is the leading revenue contributor in the region. Rising awareness regarding the benefits of minimally invasive surgeries and laparoscopic procedures and increasing healthcare expenditure are encouraging the growth of the regional market.

The Asia Pacific is poised to be the most promising region in the global arena. The growth of the region can be attributed to untapped opportunities and the growing geriatric population. Factors such as increasing healthcare expenditure and technological advancements are responsible for the higher adoption of trocars in APAC countries. Furthermore, government initiatives are also playing a vital role in the growth of the market. For instance, the Ministry of Health, China is taking initiatives to conduct training programs for surgeons on laparoscopic surgery. This, in turn, is promoting the demand for trocars in this region.

Some of the key players in the market are CONMED Corporation; The Cooper Companies Inc.; Teleflex Incorporated; GENICON, INC; Medtronic; B. Braun Medical Inc.; and Johnson & Johnson. Key players adopt strategies such as product launch, collaborations, and mergers & acquisitions and enter into partnerships to strengthen their position in the market. For instance, in November 2017, B. Braun established its subsidiary in Zambia, South Africa that marks the geographical expansion of the company.

This report forecasts revenue growth at global, regional, and country levels and provides an analysis of the industry trends in each of the sub-segments from 2014 to 2026. For this study, Grand View Research has segmented the global trocars market report based on the product, tip, application, and region: