The Tunisia pharmaceutical market size was estimated at USD 1.3 billion in 2020 and is expected to expand at a compound annual growth rate (CAGR) of 12.9% from 2021 to 2028. The market is driven by the presence of various developed and integrated facilities that promote R&D, production of pharmaceuticals in the country. Tunisia’s healthcare system is one of the more advanced health systems in the Middle East and North Africa. With a large customer base, rising healthcare expenditures, and improving disposable incomes, Tunisia is an attractive market for pharma companies. 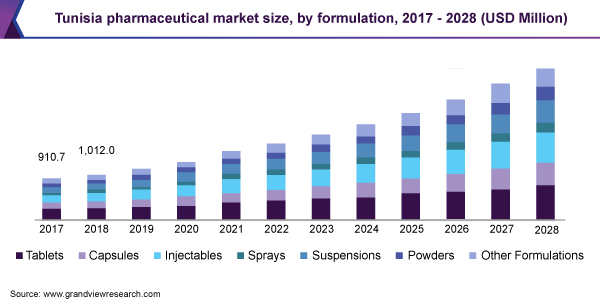 The pharmaceutical industry in Tunisia mainly operates through joint ventures with international firms. These global companies invest significantly in local players to boost the R&D of pharmaceutical drug products. For instance, Sanofi has invested a major amount in local companies. Thus, the abovementioned factors are anticipated to positively impact market growth. Moreover, the presence of R&D centers engaged in promoting the development of research clusters and scientific progress has benefitted Tunisia’s pharmaceutical sector.

According to Tunisia’s government, the country’s pharmaceutical industry recorded significant growth in the past two decades. Investments in this industry reached USD 105 million as of August 2019. This indicates increasing investments in the pharmaceutical industry, in turn, leading to lucrative opportunities for operating players looking to expand their business in the country. Furthermore, as a result of increasing exports, pharmaceutical manufacturers in the country are expanding their export reach to European and West African countries. Thus, the companies are investing a significant amount to expand their manufacturing capabilities.

The Tunisian pharma industry aims at expanding exports, particularly in European and West African markets, to tap on its developed production base as well as to gain easy access to Europe and African countries. Société Arabe des Industries Pharmaceutiques (SAIPH) is among some of the companies that are investing to boost production capacity for exports. Over the past years, SAIPH had announced exports to neighboring North African countries such as Algeria, Mauritania, and Libya, as well as to West African countries.

The tablet formulation segment dominated the market in 2020 and accounted for the largest revenue share of 24.5%. Tablets are the most common oral solid dosage forms for drug delivery, which is contributing to their high production and sales. This type of formulation is also preferred over capsules owing to various advantages such as tamper resistance, cost-effectiveness, easy handling and packaging, and high manufacturing efficiency. Tablets are the easiest to manufacture for a broad range of specialties such as antidiabetics, anti-inflammatories, antacids, vitamins, and antiallergic.

In contrast, the capsule formulation segment is anticipated to witness significant growth in the near future. The segment is expected to witness the highest CAGR of 13.7% from 2021 - 2028. The growth of the segment can be attributed to its rising application in gastroenterology. The gastro-resistant capsules are among the most common types of modified drug release systems that offer several benefits such as minimal adverse effects and enhanced bioavailability. 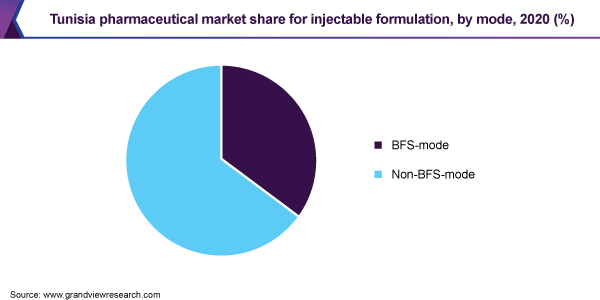 Hence, companies are engaged in manufacturing such capsules for catering to the needs of patients suffering from gastroesophageal reflux. For instance, Taha Pharma manufactures ENOMERAL 20, a gastro-resistant capsule, for treating conditions such as erosive reflux esophagitis and Zollinger-Ellison syndrome. In addition, the growing popularity of soft gelatin capsules in the pharmaceutical industry is contributing to segment growth.

The injectable formulation segment is another lucrative segment that has garnered 2nd position in terms of revenue in the market. Injectables are administered through the parenteral route, which is the second most commonly used route and is the fastest mode for drug delivery. Various companies offer injectables including MédiS Laboratories, which have expertise in the market for rapid development of complex drug formulations, especially injectables.

The healthcare industry has garnered a pivotal position in Tunisia’s socioeconomic policies in recent years. This has created a favorable environment for companies keen on entering the Tunisia healthcare market when compared to other states of the southern Mediterranean region. Additionally, Tunisia is among the very few countries of the African region that showcases a modern and efficient pharmaceutical sector, with respect to both safety and quality of medicine products being approved and introduced in the local market.

Pfizer, Inc. was leading the Tunisia pharmaceutical industry in 2020, followed by Sanofi-Aventis Tunisia. Adwya is another prominent pharmaceutical manufacturer operational in Tunisia, with more than 10.0% of output in the local drug produce. This is followed by Les Laboratoires UNIMED, Teriak, MEDIS, SIPHAT, OPALIA PHARMA, Taha Pharma, and Cytopharma. The majority of these companies were established by local professionals after the privatization of the healthcare sector in the 1990s. Some of the prominent players in the Tunisia pharmaceutical market include:

This report forecasts revenue growth at country levels and provides an analysis of the latest industry trends in each of the sub-segments from 2017 to 2028. For the purpose of this study, Grand View Research has segmented the Tunisia pharmaceutical market report on the basis of formulation:

How big is the Tunisia pharmaceutical market?

b. The Tunisia pharmaceutical market size was estimated at USD 1.3 billion in 2020 and is expected to reach USD 1.5 billion in 2021.

What is the Tunisia pharmaceutical market growth?

b. The tablet formulation segment dominated the Tunisia pharmaceutical market in 2020 and accounted for the largest revenue share of 24.5%.

Who are the key players in the Tunisia pharmaceutical market?

What are the factors driving the Tunisia pharmaceutical market?

b. Tunisia's pharmaceutical market is driven by the presence of various developed and integrated facilities that promote R&D, production of pharmaceuticals in the country. Tunisiaâ€™s healthcare system is one of the more advanced health systems in the Middle East and North Africa.