The U.S. antifouling yacht coatings market size was valued at USD 29.1 million in 2019 and is expected to expand at a compound annual growth rate (CAGR) of 6.9% from 2020 to 2027. Amid the global COVID-19 pandemic, the tourism sector has been adversely impacted. This has affected the use of the yacht, thereby increasing the need to prevent the growth of marine organisms in the yacht, which is expected to propel the market growth. Antifouling yacht coatings are used to prevent the growth of marine organisms, such as algae, tubeworms, barnacles, and mollusks, on the hull of a yacht in seawater. The accumulation of fouling and microorganisms impacts the yacht movement by creating surface resistance, further reducing the speed of the yacht and increasing fuel consumption in order to maintain speed. 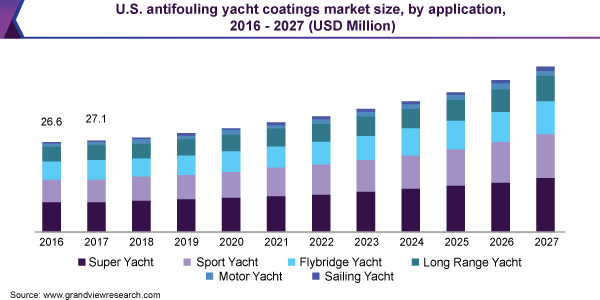 Restrictions on the use of copper-based antifouling yacht coatings may further impact the market growth in the coming years. For instance, according to the National Marine Manufacturers Association (NMMA), Washington, U.S., has passed a ban on antifouling coatings that contain more than 0.5% copper for recreational boats, and the regulation is slated to be effective till January 2026.

The super yacht application segment led the market and accounted for more than 31.0% share of the overall revenue in 2019. This significant share is attributed to the rising demand for super yacht, which has the ability to serve multiple gatherings at the same time and can be used by tourism companies for cruise trips.

In the past few years, the U.S. has witnessed growth in the number of millionaires owing to the rise in the number of digital businesses and entrepreneurs. The demand for super yacht in the U.S. market is expected to witness significant growth over the forecast period. 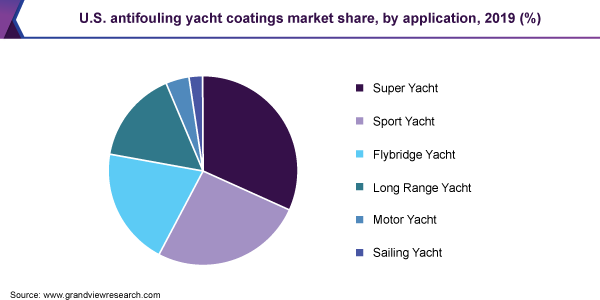 In addition, super yacht requires services every 5 years to maintain its aesthetics and comply with maritime law and insurance requirements. This, in turn, is projected to create significant demand for antifouling yacht coatings.

The long-range yacht is primarily built for all weather conditions ranging from chilled waters in the Antarctic to rough sea waves in the Pacific Ocean. The major highlighting factor is the size of the hull, which is large enough to accommodate a fully equipped kitchen providing a sense of kitchen at home. Long-range yachts are often associated with less fuel efficiency per nautical mile when compared with sport yachts and are commonly used for family trips.

The motor yacht is often called a power cruiser yacht as it serves the purpose of sports and cruising at the same time. Motor yachts are commonly used by consumers having an interest in deep-sea diving or adventure enthusiasts for a night stay in the deep ocean. The capabilities offered by the motor yacht make it suitable for short adventurous trips in seas and oceans. The growing trend of consumer spending on adventurous vacations and sports will drive the demand for antifouling yacht coatings in motor yachts over the forecast period.

Companies are actively investing in research & development activities to produce new environment-friendly antifouling coatings keeping up with the environmental regulations. For instance, in October 2020, Jotun has launched silyl methacrylate-based SeaQuantum III series antifouling coatings for the reduction of biofouling and enhancing its operational efficiency. Some prominent players in the U.S. antifouling yacht coatings market include:

This report forecasts revenue and volume growth at the country level and provides an analysis of the latest industry trends and opportunities in each of the sub-segments from 2016 to 2027. For the purpose of this study, Grand View Research has segmented the U.S. antifouling yacht coatings market report on the basis of application:

How big is the U.S. antifouling yacht coatings market?

What is the U.S. antifouling yacht coatings market growth?

b. The superyacht application segment dominated the U.S. antifouling yacht coatings market with a share of 31.0% in 2019. This is attributable to the rising demand of superyacht which has the ability to serve multiple gatherings at the same time and can be used by the Tourism Company for the cruise trip.

Who are the key players in the U.S. antifouling yacht coatings market?

What are the factors driving the U.S. antifouling yacht coatings market?