The U.S. coated steel market size was estimated at USD 20.19 billion in 2017 and is projected to witness a CAGR of 9.3% from 2017 to 2025. Growing infrastructural developments in the country and rise in automotive production are expected to drive the market. The U.S. economy is growing at a steady rate. The country’s GDP grew by 4.1% in the second quarter of 2018, which is the highest since 2014. The construction projects that were stalled on account of recession have renewed operations with accelerated progress in the country. These developments are expected to fuel the product utilization in the construction sector.

The North East and West U.S. are expected to experience major growth in the construction industry due to rising investments in residential sector. In addition, implementation of the Zero Emission Vehicle (ZEV) program has supported growth of the electric vehicles market in U.S. There are over 30 ZEV available for the public in the country. These factors are likely to positively affect the demand for coated steel in these applications. Steel is highly susceptible to rust, which ultimately leads to corrosion. Hence, coating is widely preferred as an alternative to uncoated products to prevent the degradation of the equipment and components used in the end-use industries. 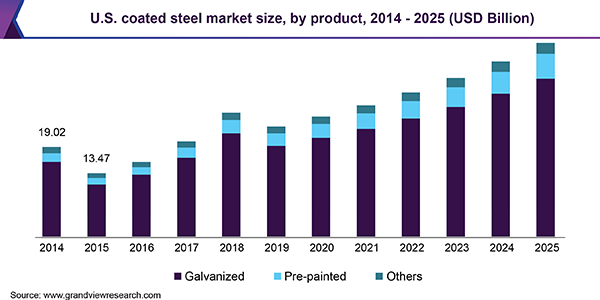 Galvanization is the most preferred option for preventing the corrosion of steel. Galvanized steel is the largest product segment in the market. Ease of use, cost-effectiveness, and corrosion resistance offered by it have led to its dominance in the end-use industries. For instance, hot-dip galvanized products are less expensive in comparison to other corrosion protection systems.

However, growth of the U.S. coated steel market is hindered by the imposition of the U.S. tariffs on various imports. The U.S. tariffs on steel imports have forced the local manufacturers to restart their closed steel mills. This is likely to boost production in the country. The tariffs have resulted in price fluctuations, which is likely to affect the suppliers/distributors and the end-use industries. The players in the industry are adopting strategic initiatives, such as mergers and acquisitions and capacity expansions, to strengthen their position in the market.

Based on product, the market is segmented into galvanized, pre-painted, and others. Galvanized segment accounted for a market share of 82.9% in terms of revenue in 2017. Hot dip galvanizing and electro galvanization are the two major processes utilized for manufacturing galvanized coated steel. Galvanized coatings are more popular with car manufacturers as they increase life expectancy of a car and are less harmful to the soil on corrosion.

In terms of revenue, pre-painted segment is estimated to witness significant growth of 11.7% over the forecast period. According to data published by the United States Steel, the demand for pre-painted steel reaches two million tons per year throughout the world.

Other products include organic coated and tin-plated. Organic coated has various applications, such as wall cladding and roofing, lighting, metal furniture, appliances, and others. The economic and technological advantages, such as less production time and less energy consumption are anticipated to bode well for the growth. Tin-plated or tin-coated is majorly used in the food and beverage industry for manufacturing containers. Increasing consumption of packaged food has augmented its demand.

Building and construction industry was the largest application segment accounting for 40.5% market share, in terms of volume, in 2017. Pipes and tubes and long products including bars, rails, rods, and beams are significantly used in the construction industry. Pipes and tubes was the second-largest imported steel product in U.S. in the first half of 2018. In addition, long products accounted for a market share of 17% of the total imports. Rising demand for these products is expected to augment the market growth over the forecast period. 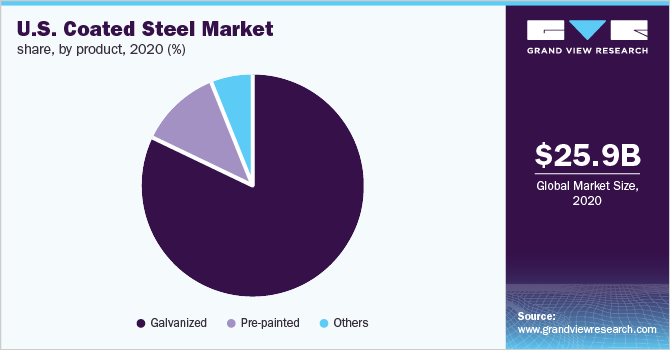 Automotive was the second-largest application and is anticipated to witness considerable growth over the forecast period. Coated steel is used for manufacturing complex shaped interior and exterior parts of vehicles. U.S. is among the largest markets for sales and production of vehicles worldwide. In 2017, the country was ranked at the second position in the world, in terms of production of cars and commercial vehicles together. The production reached 11,189,985 units during the same year.

The product has prominence in home and electronic appliances. U.S. household appliances market size was valued at USD 43.34 billion in 2016. Also, the product is used for manufacturing metal furniture and has significance in the food and beverage packaging industry. The increasing consumption of convenience food in the country is augmenting the demand for tin-plated steel from the packaging segment.

South U.S. held the dominant market share of 39.7% in terms of volume in 2017. The states including Mississippi and South Carolina are anticipated to witness a strong growth in construction sector during the forecast period. In addition, presence of automotive manufacturers in the region boosts the demand for coated steel. For instance, according to the Center for Automotive Research, Texas had 502 auto manufacturing establishments in 2015.

In terms of revenue, West U.S. is anticipated to progress at a CAGR of 12.4% over the forecast period. The growing infrastructural developments in states, such as Idaho was one of the key reasons for the increased construction employment in 2017. The new private housing structures authorized by building permits in Southeastern Idaho reached 442 in 2016 from 217 in 2011. North East U.S. is expected to witness major infrastructure projects, such as the Second Avenue Subway. Such factors are anticipated to boost the regional demand in near future.

The market is dominated by major players, such as United States Steel, Nippon Steel & Sumitomo Metal Corporation, Voestalpine, and NLMK. Merger and acquisitions and capacity expansions are the key strategies adopted by the major companies. For instance, in November 2015, Voestalpine acquired Wickeder Steel Company for extending its presence in the country.

The United States Steel’s new continuous galvanizing line is anticipated to start production in 2019. Furthermore, Nucor is building new production capacities to support its automotive growth strategy. The companies are aiming to expand their geographical reach and product portfolio to cater to a larger segment of customers.

This report forecasts revenue and volume growth at country and regional levels and provides an analysis of the latest industry trends in each of the sub-segments from 2014 to 2025. For the purpose of this study, Grand View Research has segmented the U.S. coated steel market report on the basis of product, application, and region: