The U.S. contract glazing market size was valued at USD 7.9 billion in 2019 and is expected to grow at a compound annual growth rate (CAGR) of 4.7% from 2020 to 2027. Increasing demand for flat glass products in the construction industry on account of rising developments in the commercial sector of the country is anticipated to augment market growth. 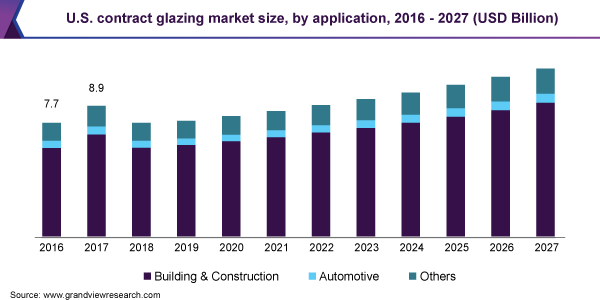 Increasing the construction of hotels, office buildings, and retail stores in the U.S. are accelerating the demand for contract glazing services. The U.S. hotel construction pipeline has been showing a positive trend past few years, which is expected to be seen during the forecast period as well. The country had more than a thousand new hotels in 2019 and this number is expected to grow by 2% to 2.5% in 2020 and 2021.

Growing demand for flat glass products in construction and automotive industries, on account of their characteristics, such as transparency, strength, workability, and transmittance is expected to positively influence the market growth. Building and construction is the key application segment and with a rising number of upcoming projects, such as Lincoln Yards in Chicago and River District in North Carolina, the construction spending in residential as well as commercial segments by private companies and government agencies is expected to increase. The growing number of construction projects is expected to boost the demand for glass, thereby driving the growth of the U.S. contract glazing market.

The demand in the automotive industry is expected to grow in the forthcoming years on account of the increasing number of road accidents, leading to the replacement of windshields and windows in the vehicles. An average of 6 million car accidents are recorded in U.S. every year. In addition, a rising number of old vehicles that require regular maintenance and repairs is anticipated to augment the automotive aftermarket segment in near future.

The lack of a skilled workforce in the country is anticipated to restrain the demand for contract glazing in near future. Labor has been a top priority and challenge for the construction companies and contract glaziers since past few years. The U.S. economy is facing a shortage of workers, which can be indicated by a higher number of job openings than the people looking for it. For instance, according to the U.S. Department of Labor, in January 2019, the country had 7.6 unfilled jobs, whereas only 6.5 million people were looking for work.

Based on application, the market is segmented into building and construction, automotive, and others. Building and construction was the largest segment in 2019 accounting for a revenue share of over 75%. The growth is directly proportional to the increasing demand for glass in the country. This industry can be further segregated into residential, commercial, and institutional segments, of which the commercial segment accounting for the largest market share.

The growth of the commercial sector can be attributed to the increasing number of hotels in the country. A significant number of hotels were constructed in 2019, and the same trend is expected to continue in 2020. Ritz-Carlton, Paradise Valley, The Godfrey Hotel Hollywood, The Ben, Loews Kansas City, and Kimpton Bozeman, are among the few hotels expected to open in 2020.

The other applications segment comprises of the glass utilized and installed in the interiors of residential and non-residential sectors, such as partitions, shower walls, cubicles, doors, and various types of décor that involves glass. The demand for glass is increasing in bathrooms when it comes to the residential sector owing to benefits such as ease in cleaning, less space consumption, and less clutter. Unlike glass, the usage of other materials such as metallic or wooden barriers can get weathered and rotten away over time.

Based on product, the market is segmented into flat glass and others, where the former is further split into basic, laminated, tempered, and insulated. Insulated glass accounts for the largest market share in 2019 and is majorly used in the exterior of the buildings. Its demand persists owing to the excellent thermal and sound insulation properties it provides along with high-strength against wind and snow loads when compared to single pane glass.

Tempered and laminated glasses are widely preferred in the automotive industry owing to their characteristics that meet the safety demand. As a result, these glasses are categorized as safety glasses in the industry. Their demand is increasing on account of the rising number of road accidents in the country. For instance, according to the National Safety Council, the traffic fatalities in the country reached nearly 40,000 in 2018. The number was around 18,580 between January 2019 and June 2019. The road accidents lead to car damage and replacement of parts including windshields, backlites, and sidelites, thus, driving the demand. 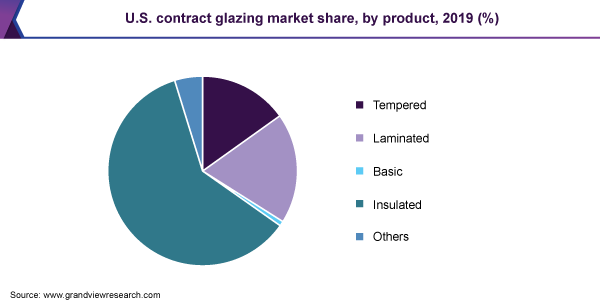 Fiberglass also has applications in the automotive industry especially in aftermarket body kits, such as front and rear bumpers and bonnets. The increasing willingness of consumers to customize and create a unique look that is different from an assembly-line vehicle is expected to boost the demand for aftermarket body kits, in turn, is likely to propel the product demand.

Northeast region is anticipated to witness the highest CAGR over the forecast period, as it is the most economically developed, culturally diverse, and densely populated region as well as home to the country’s largest metropolitan area, New York. In 2018, the U.S. construction began at USD 606.3 billion, 2% higher than 2017, out of which New York metropolitan comprised USD 40.8 billion.

Southwest region accounted for the second-largest market share of 24.2%. in 2019. The region consists of four states, with Texas being the largest state. Texas alone constitutes about 7.1% of the total area in the U.S., reflecting the potential for real estate to flourish in the state. Although construction spending has slightly declined in Texas in 2019, it is expected to rise during the forecast period.

Construction is the fastest-growing industry in the West U.S., attributed to the increasing growth in both commercial and residential sectors. Construction activities in this region include several small and midsized projects as well as large developments. California is among the prominent states in the region and a hub for various industries, including technology, sports, and entertainment. A number of upcoming large-scale projects in the state are expected to propel the growth of the construction industry in California, thereby, increasing growth prospects for contract glazing.

Southeast is one of the most popular regions for construction in the U.S., owing to factors such as relatively low cost of living, moderate population growth, abundant availability of land for development, and mild climate. The U.S. states such as Florida, Kentucky, Alabama, and South Carolina are significantly contributing to the growth of the automotive aftermarket industry in the Southeast region, owing to the increasing number of accidents in these states. For instance, Florida is considered to witness the highest number of car crashes as it has some of the country’s busiest and most dangerous roads.

The fabricating companies are adopting strategies such as mergers and acquisitions in order to increase their market share in the industry and to cater their products to potential customers. For instance, in January 2020, American Insulated Glass, LLC.—leading glass fabricator and distributor in Southeast U.S.—acquired A .L. Smith Glass Company, a glass fabricator and distributor in Ijamsville, Maryland. The acquisition was intended to meet the needs of the commercial construction sector. Some of the prominent players in the U.S. contract glazing market include:

This report forecasts revenue and volume growth at country level and provides an analysis of the latest industry trends in each of the sub-segments from 2016 to 2027. For the purpose of this study, Grand View Research has segmented the U.S. contract glazing market report on the basis of product, application, and region: