The U.S. deep brain stimulation in Parkinson’s disease market size was valued at USD 453.66 million in 2021 and is expected to expand at a compound annual growth rate (CAGR) of 7.30% from 2022 to 2030. The increasing prevalence of Parkinson’s Disease (PD) is a high-impact rendering driver for the deep brain stimulation devices market. After Alzheimer's Disease (AD), PD is the most common neurodegenerative disorder. It is caused by a combination of genetic (mutations in the alpha-synuclein gene) and environmental factors (repeated head injuries), with age being the major risk factor. 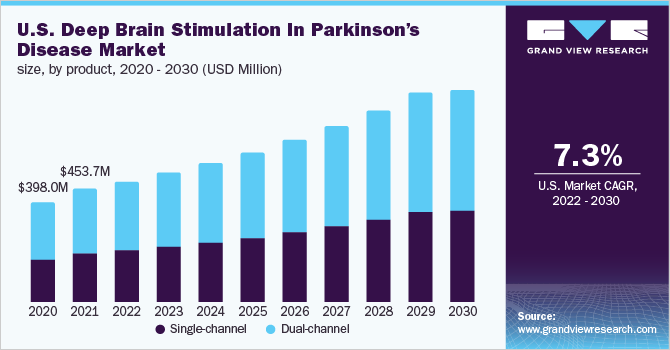 As per estimates by the Parkinson’s Foundation Prevalence Project, the number of people living with PD will increase to 1.2 million by 2030, from 930,000 in 2020. This is more than the number of patients suffering from muscular dystrophy, multiple sclerosis, and amyotrophic lateral sclerosis. Approximately 60,000 people in the U.S. are diagnosed with PD every year. Its growing prevalence has raised the demand for DBS as an alternative therapy, which has proven to be vital in providing therapeutic solutions for PD symptoms.

COVID-19 has had a negative impact on the market growth, affecting demand and production directly, disrupting the supply chain, and increasing the financial burden on businesses. During the pandemic, neurological surgeries were regularly postponed and/or canceled to prevent the spread of COVID-19. Neurosurgical procedures decreased by 55% in the worst-hit countries, including the U.S., Russia, India, Brazil, France, the U.K., Italy, and Spain. Growing evidence suggests that the COVID-19 virus causes brain fog and other neurological symptoms.

Manufacturers faced difficulties serving surgeons owing to hospitals operating with restricted access. This negatively affected procedural volumes in 2020, limiting the market growth. However, an increase in the adoption of tele-consultancy globally for follow-ups and routine checkups to address the symptoms of Parkinson's disease during the pandemic is playing a key role in boosting the market growth. Thus, such trends are expected to have a significant impact on the adoption of DBS in the coming years.

Furthermore, the market is expected to increase in the near future mostly owing to the increased sales volumes in the neuromodulation industry. Pricing pressure on DBS due to the competition in the U.S. and other key markets mitigated some of this growth. Moreover, the majority of players operating in the U.S. market are strengthening their market position through launching a more comprehensive and technologically advanced product portfolio, mergers & acquisitions, and geographic expansion in new markets.

For instance, in February 2022, Aleva Neurotherapeutics, a developer of implants for deep brain stimulation (DBS) in important neurological disorders such as essential tremor and Parkinson's disease, announced that they have gained FDA approval for an Investigational Device Exemption (IDE) research. The protocol has been approved to collect data on efficacy and safety in the preparation for a future PMA application. The FDA issued the approval after an extensive exchange of information between the FDA and Aleva, during which all clinical data and safety testing were thoroughly investigated. As a result of this, the market is expected to grow in the near future.

Furthermore, as per a study published by the U.S. National Library of Medicine, enhancements in electrode design can enhance the efficiency of DBS devices by reducing the frequency of surgical replacements and the chances of adverse effects. During traditional surgery, DBS current is provided using a four-contact lead with stacked cylindrical electrodes. The newly improvised lead designs offer an eight-contact electrode that can deliver current to wider regions and multiple targets. The growing demand for minimally invasive treatments for neurological illnesses and resistant neuropsychiatric conditions has increased interest in neuromodulatory techniques like DBS. Clinical studies, which are the pinnacle of evidence that will define DBS treatment, must be well-designed and conducted as the field grows.

Innovations in deep brain stimulation in Parkinson’s disease have been ongoing for the past decade with significant efforts focused on increasing the application of DBS in controlling motor dysfunction, reducing motor dysfunction, and increasing the adoption of DBS in other areas such as depression and dystonia. Many key market players are constantly trying to develop new products or upgrade their products to meet the changing need of the patients by patient basis. In the future, technologies such as the use of light-based deep brain stimulation in Parkinson’s disease are likely to get approved. These technologies will help to cater to the need of the patients suffering from Parkinson’s disease in a better way.

The dual-channel led the market and accounted for more than 55.0% share in 2021. High-frequency DBS has become a widely utilized procedure for the management of severe momentum disorders when the symptoms can no longer be improved by medical treatment. The procedure is safe, bilateral, and reversible. It can be performed by bilateral implantation of leads into the target areas. Growing adoption of double-channel DBS for the treatment of numerous neurological disorders, such as Parkinson’s disease, dystonia, Alzheimer’s disease, and epilepsy, is a key factor fueling segment growth.

Moreover, technological advancements and new product launches are further impelling segment growth. For instance, in January 2020, Abbott’s Infinity DBS system secured FDA approval for the treatment of Parkinson's disease from the U.S. FDA. This system will allow targeting of a specific area of the brain called internal Globus Pallidus (GPi), which is associated with Parkinson's disease symptoms. In addition, Vercise, Vercise PC, & Vercise Gevia DBS systems by Boston Scientific; Activa PC & Activa RC by Medtronic; and Infinity by Abbott are some of the key offerings under the segment. 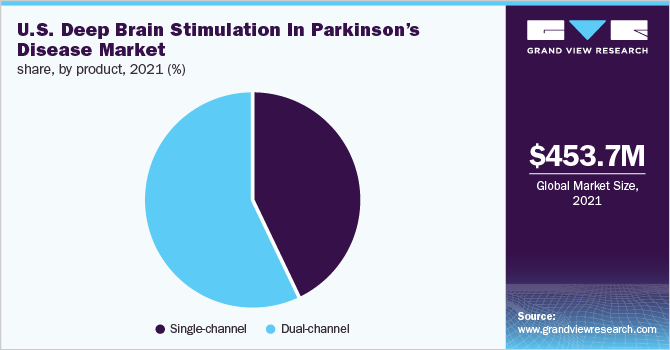 The single-channel segment is anticipated to witness the fastest growth over the forecast period. A Deep Brain Stimulator (DBS) device is also known as brain pacemaker and has been clinically used over the past 25 years for the treatment of Parkinson's disease. The single-channel DBS systems are used for patients who have only one lead implanted. Healthcare professionals consider that a single channel offers the neurologist more programming options and provides better motor results, which led to the increased preference for single-channel DBS.

A rise in the geriatric population, which is more prone to developing Parkinson’s disease, and growing awareness about neurological movement disorders among patients are anticipated to impel the growth of the segment. For instance, as per the World Ageing 2019 report, it is estimated that globally, there were about 703 million people aged 65 years in 2019. Furthermore, in March 2018, the Brain & Spine Foundation (BSF) and Neurological Alliance launched “Brain Awareness Week,” a global campaign to increase awareness about progress in diagnosis, treatment, and prevention of neurological conditions. One of the key products offered under this segment is Activa SC, which is a single-channel DBS offered by Medtronic. Activa SC controls one-DBS electrode, which has been approved for the treatment of Parkinson’s disease.

This report forecasts revenue growth at the country level and provides an analysis of the latest industry trends and opportunities in each of the sub-segments from 2017 to 2030. For the purpose of this study, Grand View Research has segmented the U.S. deep brain stimulation in Parkinson’s disease market report on the basis of product:

How big is the U.S deep brain stimulation in Parkinson's disease market?

What is the U.S deep brain stimulation in Parkinson's disease market growth?

b. Dual-channel segment dominated the U.S deep brain stimulation in Parkinson's disease market with a share of 56.93% in 2021. Dual channel DBS offers the best overall support, exhibiting greater effectiveness in reducing patient tremors and enhancing the quality of life.

Who are the key players in U.S deep brain stimulation in Parkinson's disease market?

b. There are three major players in the market—Medtronic, Abbott, and Boston Scientific—with FDA-approved DBS systems for Parkinson’s disease. Among these, Medtronic has been in the market for a longer duration compared to Abbott and Boston Scientific. All three players give unique service and product offerings such as greater stimulation, increased contact points, greater battery life, and ease of implantation, catering to a broad range of patients affected with PD.

What are the factors driving the U.S deep brain stimulation in Parkinson's disease market?

b. The major factors impacting the growth of the U.S deep brain stimulation devices in Parkinson's disease market are introduction of technologically advanced products, increasing incidence of chronic diseases such as PD and supportive government initiatives.