The U.S. medical device manufacturers' market size was valued at USD 154.0 billion in 2017 and is anticipated to exhibit a CAGR of 5.0% over the forecast period. The rising prevalence of chronic diseases and the increasing geriatric population in the country are among principal market drivers. 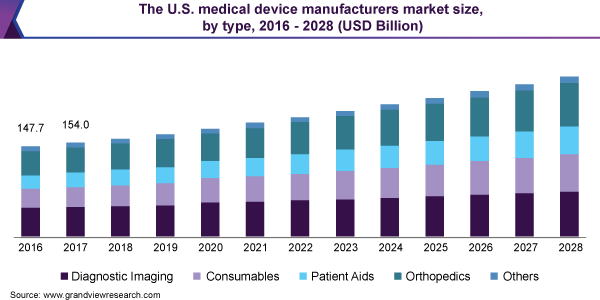 There has been a recent increase in demand for minimally invasive surgeries and this is consequently expected to drive the market for medical devices suppliers. Minimally invasive surgeries involve small incisions, short hospital stays rapid wound healing, less pain and surgical wounds, and low risk of complications in comparison with open surgeries. They also aid in controlling healthcare costs. According to a report titled “Health, United States, 2015” published by the U.S. Department of Health and Human Services, the cost associated with arthroplasty (knee replacement), hip replacement, and spinal fusion surgery in the U.S. in 2013 was USD 11,563, USD 7,927, and USD 11,635 respectively. As a result, the growing need to reduce these costs is expected to have a positive impact on the market.

According to the National Institute of Diabetes and Digestive and Kidney Diseases, 30.3 million people in the U.S. are currently suffering from diabetes. Since injectable pens are mostly used in diseases such as arthritis, diabetes, osteoporosis, growth hormone deficiency, and anaphylaxis, the increasing prevalence of these diseases is expected to drive the market for injectable devices.

Favorable reimbursement policies such as the U.S. Medicare system have been playing an important role in the growth of the bronchoscopes market. Some of the bronchial procedures for which reimbursements are available are bronchial or endobronchial biopsy, transbronchial lung biopsy, bronchoalveolar lavage, and rigid and flexible bronchoscopy. For instance, Boston Scientific Corporation, in association with Centers for Medicare and Medicaid Services (CMS), offers reimbursement for all devices that fall under Ambulatory Payment Classifications (APCs), covered under C-codes. The favorable reimbursement structure is expected to fuel market growth.

Other driving factors include a rise in lifestyle-associated health conditions, accidents, and sports injuries. Growing demand for effective emergency care and increasing adoption of mobile surgery centers are expected to drive the market during the forecast period.

Based on type, the U.S. medical device manufacturers market is segmented into diagnostic imaging, consumables, patient aids, orthopedics, and others. The diagnostic imaging segment captured the largest market share in 2017 owing to the growing demand for accurate diagnostic methods and devices. Diagnostic imaging is an important tool for the diagnosis of a wide range of chronic as well as acute diseases. Chronic diseases accounted for a significant share of the country’s healthcare expenditure, as they require long-term medical care. Healthcare organizations are therefore looking for options to reduce healthcare costs.

In recent years, the category of imaging equipment has witnessed several new product launches and currently has a large number of products in the pipeline. The incidence of chronic diseases is increasing globally and early diagnosis leads can be extremely crucial in determining treatment plans. An increase in the number of sports and trauma injuries is boosting demand for orthopedic devices, leading to market growth. The high geriatric population in the country is also an important factor in boosting the market.

Favorable reimbursement structure leads to higher adoption of medical devices among patients in the U.S., leading to the growth of the market for medical device suppliers. This trend is also observed in the developing regions of Asia Pacific.

Some of the key players in the market are 3M, Abbott Laboratories, Baxter International, Boston Scientific Corporation, B. Braun Melsungen, GE Healthcare, Johnson and Johnson, and Medtronic.

Regional and service portfolio expansions and mergers and acquisitions are key strategic undertakings adopted by these players. In April 2017, Abbott and Alere amended the terms of their merger agreement for the former’s acquisition of the latter to expand Abbott’s global presence and leadership in diagnostics. These are some of the strategies companies adopt to achieve growth in product sales.

This report forecasts revenue growth at the country level and provides an analysis of the latest industry trends in each of the sub-segments from 2014 to 2025. For this study, Grand View Research has segmented the U.S. medical device manufacturers market report based on type:

How big is the U.S. medical device manufacturers market?

What is the U.S. medical device manufacturers market growth?

b. Diagnostic imaging segment dominated the U.S. medical device manufacturers market with a share of 31.0% in 2019. This is attributable to the growing demand for accurate diagnostic methods and devices, an increase in the number of sports and trauma injuries is boosting demand for orthopedic devices, leading to market growth.

Who are the key players in U.S. medical device manufacturers market?

What are the factors driving the U.S. medical device manufacturers market?