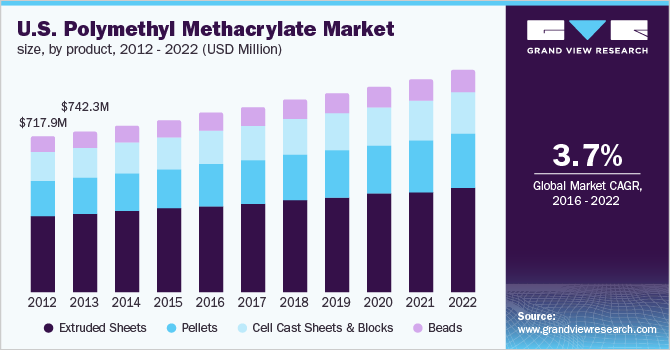 Crude oil price volatility has a huge impact on petrochemicals pricing, thus affecting MMA prices. To counter these challenges, companies such as Lucite and Altuglas have invested in R&D to develop PMMA through bio-based sources at prices competitive with conventional PMMA.

EPA policies are framed on the basis of health and environmental impact of a substance. The EPA has assessed health impact of MMA monomers on humans in 1998 and included it on Integrated Risk Information System (IRIS) database. Based on its assessment, EPA has established that MMA is non-carcinogenic in nature and possesses low to medium toxicity.

Moreover, the market is characterized by R&D initiatives by companies to improve PMMA production process and develop bio-based sources for MMA. Prevailing macroeconomic conditions such as GDP growth and industrial output are driving the construction and automotive industries.

The automotive industry has recovered and reached pre-crisis level in North America. As a result, the U.S. passenger car manufacturing has increased, along with rising exports to the markets in Canada, Mexico, Europe, and Asia. PMMA is increasingly used as a glass substitute in facade applications in the construction industry. Automotive glazing, LED headlights, and body components use PMMA as a substitute for glass and polycarbonate due to its excellent transparency, clarity, and light permeability.

On the basis of product, the industry is segmented into extruded sheets, cell cast sheets and blocks, pellets, and beads. Extruded sheets were the largest consumed product, accounting for 55.3% share of the overall volume in 2014. Extruded sheets are used in numerous applications such as LED screens, decorative interiors, solar panels, building facades, and visual marketing communication displays.

Pellets are the most basic forms available in diverse colors and sizes, thereby allowing ease of molding into desired shapes and sizes. PMMA pellets are generally purchased by processors who convert the product into end-use forms by different molding procedures. The construction industry is the largest consumer of cell cast sheets and blocks. Unique coloring and blending capabilities with weather/chemical resistance and superior clarity enable these sheets to be used as a substitute to glass and polycarbonate (PC) in window glazing, facades, patio roofs, and worktops.

The U.S. market has been segmented on the basis of application into construction, electronics, automotive, signs and display, along with niche applications such as sanitary ware, coating and emulsions, furniture, solar panels, and medical devices. Signs and display was the largest application segment and the segment demand was 73.3 kilotons in 2014. Increasing plastic consumption in automotive components is expected to increase the product usage in applications such as window glazing, LED headlights, and body components. 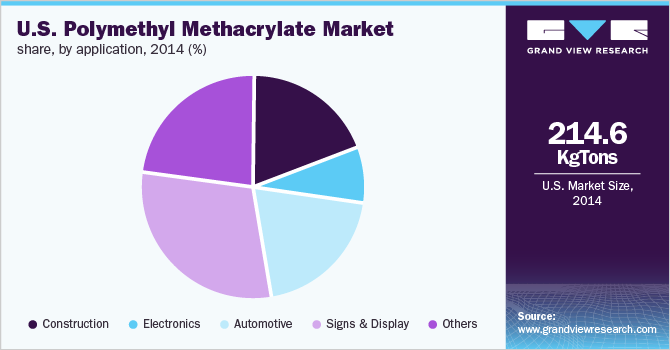 The automotive application segment generated a revenue of USD 155.5 million in 2014. Historically, medical applications of PMMA have been limited to its usage as bone cement and dental fixture. It is gaining prominence in medical devices such as cuvettes, incubators, and desiccators as an alternative to other medical polymers such as PC and PVC. Its superior biocompatibility and non-carcinogenic nature are expected to drive its demand in medical devices.

Top four companies: Altuglas, Lucite, Evonik, and Plaskolite accounted for 72.0% share in the U.S. market in 2014. The industry is highly consolidated and characterized by price wars, production process optimization, and integration through supply chain. Altuglas International, a subsidiary of Arkema, emerged as the leading company with over 25.0% share in the market.

Evonik and Arkema have collaborated in 2011 to develop bio-based MMA through their proprietary process known as AVENEER. With a capital investment of approximately USD 150.0 million, Evonik’s eco-friendly MMA plant started its operations in Alabama by the end of 2015 and achieved the industrial scale by 2018.