The U.S. wine market size was estimated at USD 61.80 billion in 2017. The increasing penetration of the product on account of growing consumer preference for the low percentage of Alcohol by Volume (ABV) blends is expected to drive market growth. The availability of a wide range of products with multiple flavors across all categories and price points including popular, premium, and luxury segments is expected to drive the market growth over the forecast period. 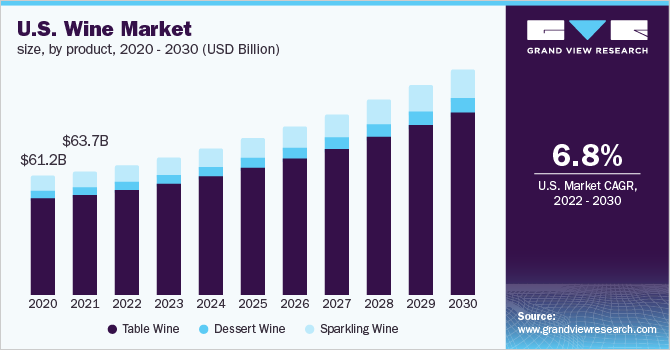 The growing demand for the product through online distribution channels makes it easier for smaller wineries to reach customers across the U.S. thereby encouraging investors to enter this market. In 2016, over 760 new establishments have opened in the U.S. indicating favorable economic conditions, increasing the investments in the industry.

The increasing availability of the product is the other major factor growing consumer preference for the product. Nail salon, movie theaters, bookstores, and even car washing stations along with some grocers such as Kroger, Wegmans, and Whole Foods serve food and on-premise wine in stores thereby promoting the consumption of the product.

Automated machinery is used at various stages of the harvesting and production processes, especially at larger producing facilities. Advancements in agriculture technology (ag-tech) to use water and electricity efficiently, use of drone aircraft to irrigate crops and thermal & GPS sensors to collect data on all aspects of grapevine physiology is likely to enhance the product quality.

Major raw materials required for manufacturing include grapes and water. Also, manufacturers use berries, apples, cherries, palm, rice, colors, flavors, sugar, yeast, enzymes, and a range of other products in production. The premium quality of grapes is used as it determines the taste of the product on account of which, raw material costs equal to about 40% of overall industry revenue.

Table wines accounted for a major share of the overall consumption in 2017 owing to lower prices as compared to their counterparts. The low alcohol content of the product, i.e., 14% Alcohol by Volume (ABV) is a major factor for the daily consumption of these blends in the country. Also, the American culture of consuming alcohol with food has led to the domination of the segment in the country.

Table wines enhance the flavor of the food and are available at a lower cost in the market on account of which consumers with low and medium income levels prefer these blends over their counterparts. The demand for premium quality products including merlot, cabernet sauvignon, and chardonnay during holiday seasons is likely to have a positive impact on market growth.

Dessert wines are sweet and are popularly referred to as pudding wines. Dessert blends made from grapes with sufficient sugar to spare is strong and sweet, which complements the taste of the desserts on account of which the per capita consumption of the product is increasing substantially in the U.S.

Sparkling wine is the fastest-growing segment in the industry, indicating a significant increase in the consumption of champagne and prosecco from 2014 to 2017. The manufacturers have introduced a wide range of low-cost products in the segment category that has played a major role in driving the segment growth.

The growing demand for wine is garnering the attention of producers towards new distribution channels, markets, and customers. The product is majorly distributed through off-trade and on-trade distribution channels. In 2017, the off-trade channel accounted for 72.5% of the volume sale owing to rising demand from hypermarkets, supermarkets, convenience stores, mini markets, and liquor shops.

On-trade distribution channels including hotels, restaurants, and clubs accounted for 28.7% of the revenue share in 2017. The higher cost of the product through these distribution channels is expected to hamper the segment growth over the forecast period. However, high business entertainment spending and tourism industry are likely to boost the sales-driving the demand for the product through on-trade channels.

Wineries have increased their sales to major supermarket chains by improving the quality and value of their private-label selections. The share of grocery retailers in the overall sales is growing as a large number of grocers offer inexpensive bottles of private-label blends, which are produced exclusively for a single retailer and sold under the store’s brand rather than the winery’s brand name.

The U.S. is the largest producer and consumer of alcoholic beverages in North America with California, Oregon, Washington, and New York being the top producing states. The industry in the U.S. operates with 11,496 manufacturing establishments, up 6.6% from 10,736 in 2015. However, the industry is concentrated with 50 major companies accounting for the majority of the revenue share.

California accounted for around 85% of overall U.S. production in 2017 with the presence of 4,653 establishments in the state. California distributes fine blends to several markets, including shipments to the U.S. and exports to neighboring countries. According to the Wine Institute, the shipments from California to the rest of the U.S. reached an estimated value of USD 34.1 billion in 2016.

The U.S. exports to major markets including Canada, the UK, Hong Kong, Japan, and Germany have reached USD 1.62 billion in 2016. California accounted for over 90% of the export revenue on account of the quality, diverse styles, value, and environmental stewardship in its alcohol production.

Table wines are regularly consumed varieties and majorly distributed through off-trade distribution owing to the low cost of products associated with the channel. Chardonnay is the largest selling blend accounting for a 20% volume share, followed by Cabernet Sauvignon and other red blends including pinot grigio/gris, pinot noir, sweet reds, Merlot, and white zinfandel/blush.

The industry is concentrated with 50 major companies accounting for over three-fourth of the industry revenue. The Wine Group, Constellation Brands U.S. Operations, Inc., E. & J. Gallo Winery, Treasury Wine Estates are the key players in the industry and compete based on production volumes and product pricing. However, small-scale players are involved in producing high-quality premium blends.

This report forecasts revenue growth at the country level and provides an analysis of the industry trends in each of the sub-segments from 2014 to 2025. For this study, Grand View Research has segmented the U.S. wine market based on product and distribution.