Global Vascular Closure Device (VCDs) market size was valued at USD over 1.0 billion in 2015. The continuous advancements in medical technologies have changed the scenario of cardiovascular procedures by the emergence of VCDs. Invention of vascular closure devices helps tackle the complications associated with vascular access site, which is the root cause of morbidity following catheterization procedures. VCDs also reduce the time needed for hemostasis and improve patient’s comfort, which in turn has bolstered the prospects for market growth.

Shift of medical facilities toward minimally invasive procedures along with the usage of imaging technologies and radiotherapy has created opportunities in this market. Deployment of imaging technologies to monitor cardiac functions will increase the demand for heart surgeries, in turn augmenting demand and sales of VCDs during the forecast period.

Rising incidents of cardiovascular disease worldwide is a major factor spurring the growth of this industry. According to the American Heart Association, cardiovascular disease is the leading global cause of mortality, accounting for 17.3 million deaths per year. This number is expected to rise to around 23.6 million by 2030, which pronounces the need for the development of heart-related surgeries. 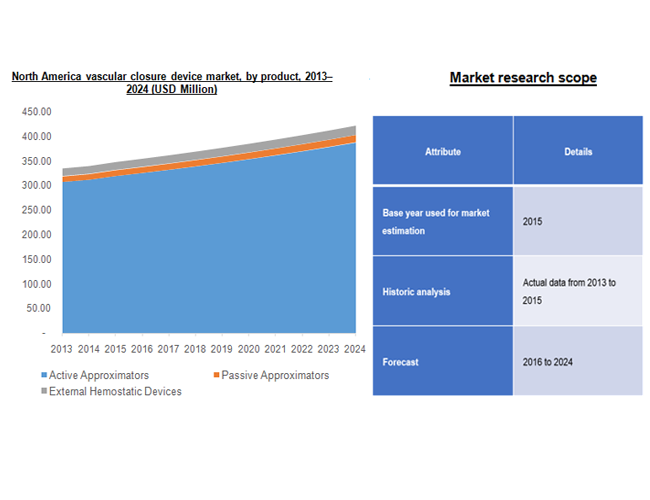 This market is expected to witness surging growth in the coming years because of increasing adoption of interventional cardiac catheterization, such as Percutaneous Coronary Intervention (PCI) for the treatment of narrowed coronary arteries (caused due to chronic heart diseases), by physicians. PCI involves insertion of catheter, which might cause vascular injuries, hence driving the demand for VCDs. However, complications related to VCDs, such as risk of leg ischemia and groin infection, are expected to hamper the growth to some extent over the forecast period.

Active approximators accounted for the largest share in 2015 owing to their high efficiency. Also, many companies are focusing on this segment for release of new products. Recently, Essential Medical, Inc. developed MANTA, an active approximator that seals femoral punctures made during cardiac catheterization.

Passive approximators are the fastest-growing segment as they provide reliable and quick hemostasis of vascular access sites. Increasing number of products falling in this category, such as Angio-Seal, X-Seal, Mynx, FastSeal, is expected to boost revenue generation for passive approximator VCDs over the forecast period.

Hospitals and clinics are expected to witness substantial growth in the next 7 years owing to the increasing popularity of VCDs to reduce the need for open-heart surgical procedures, which in turn is fueling demand for this technology worldwide.

In 2015, North America accounted for the largest share of over 33%. Factors attributed to this largest share include developed healthcare framework and presence of key players operating in this region. Moreover, increasing incidents of cardiovascular diseases in the U.S. is expected to foster the penetration of VCDs in this region.

However, Asia Pacific is expected to witness the fastest growth in the next 7 years due to the emerging economies of China and India. Furthermore, presence of untapped areas and unmet needs of patients have attracted significant attention from industry players and are potential factors boosting growth in this region. Key players of different regions are enhancing their product catalog to gain entry into untapped territories, which consequently propels growth in this region.

For instance, in November 2015, Medtronic released the VenaSeal closure system in the U.S. This product received FDA approval through the Pre-market Approval (PMA) process. It is the first non-sclerosant and non-tumescent procedure that received approval to treat symptomatic venous reflux in the U.S. This success achieved by Medtronic is expected to boost revenue generation by the company, in turn, enhances its presence over the forecast period.

Similarly, in August 2013, C. R. Bard, Inc. announced the acquisition of Medafor, Inc. Medafor, Inc is a leading developer and supplier of plant-based hemostatic agents. This acquisition is projected toward reinforcing the company’s vascular closure devices portfolio for hospitals and clinics, thus providing a revenue-generating growth to the market.

How big is the vascular closure device market?

b. The global Vascular Closure Device market size was estimated at USD 1.1 billion in 2019 and is expected to reach USD 1.2 billion in 2020.

What is the vascular closure device market growth?

b. Active Approximators dominated the Vascular Closure Device market with a share of 92% in 2019. This is attributable to reduction in the time for ambulation with their use and high efficiency rate of these devices.

Who are the key players in vascular closure device market?

What are the factors driving the vascular closure device market?

b. Key factors that are driving the market growth include growing popularity of femoral artery cardiac catheterization and high success rate of vascular closure device (VCDs) for improved patient comfort and shortening of hemostasis time.