The global vegan chocolate confectionery market size was valued at USD 467.2 million in 2020 and is expected to grow at a compound annual growth rate (CAGR) of 14.8% from 2021 to 2028. Increasing acceptance of veganism among consumers, especially among millennials and the working population, has been fueling the product demand. The COVID-19 pandemic adversely affected the market due to lockdown imposed in most of the countries, which hampered the supply of cocoa across the globe and resulted in less production as well as restricted sales. Artisanal and high-end chocolates, in particular, witnessed low demand. On the other hand, the stockpiling and sudden surge in the demand for chocolates by consumers may support the market growth. 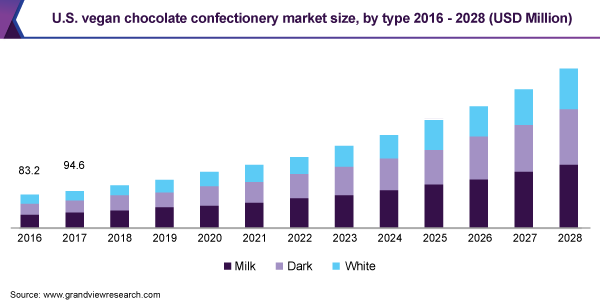 Moreover, the growing awareness regarding animal cruelty and the rise in environmental protection campaigns are supporting the market growth. The rising cases of lactose intolerance and other food-related allergies among children and adults have changed the food preferences of consumers in recent years. According to data provided by Food tolerance Network, in 2019, around 70% of the population of the world had lactose intolerance.

The ongoing scenario has fueled the demand for vegan products at the global level. Over the past few years, people across the globe have witnessed several food allergies and lactose intolerance due to dairy-based foods including milk, cream, cheese, and yogurt. Being intolerant to dairy can result in various types of allergies, such as anaphylaxis, milk protein-induced entropy, and protein-induced gastroenteritis.

Due to such health effects, the demand for vegan products is on the rise. Thus, the growing vegan population is estimated to drive the market growth over the forecast period. According to an article published in Forbes magazine, in 2018, the vegan population in the U.S. increased by 600% from 2014 to 2017. Such trends will offer new growth opportunities to the market over the forecast period.

Milk was the largest product segment with a share of more than 39% in 2020. Major players in the market are launching their renowned chocolate confectionery in a vegan version too. With this strategy, the company can enjoy the brand loyalty of customers across the globe and result in higher sales of such products. For instance, in February 2020, MondelÄ“z International announced the launch of a vegan version of its most popular brand Dairy Milk.

According to a study conducted by Google in October 2019, Cadbury Dairy Milk chocolate was considered to be the most popular chocolate confectionery bar in the world. Vegan dark chocolate confectionery is anticipated to be the fastest-growing product segment from 2021 to 2028. In the past few years, the popularity of the product among consumers, especially in Asian countries, has increased with shifting taste preferences and growing awareness about the many health benefits of dark chocolate.

The offline distribution channel segment accounted for the largest share of more than 75% in 2020. The segment is projected to retain its dominance throughout the forecast period owing to the high consumer inclination toward shopping grocery products from supermarkets and convenience, specialty, & grocery stores. Most of the products launched by companies are debuted at big supermarkets, such as Walmart, Tesco, and Kroger, due to their larger customer base. The wide availability of both premium and private label brands at these stores boost product sales through offline distribution channels.

For instance, in June 2020, Wicked Kitchen, a vegan brand in the U.K., launched its first-ever vegan cupcakes through Tesco supermarkets in the U.K. The online distribution channel segment is expected to register the fastest CAGR from 2021 to 2028. The shift in consumers’ shopping behavior is one of the major factors driving product sales through online channels. Growing consumer preference for online platforms has prompted companies to offer products through this channel.

Molded bars held the largest revenue share of more than 42% in 2020 and is expected to maintain the leading position over the forecast period. Bar chocolates are the most consumed chocolate form in the world. They are popular among consumers owing to their convenient size. According to a study conducted by Google, the top five chocolates titled as favorite chocolates in the world, based on their annual searches, are sold in the bar form. The product demand in the retail market of the Middle East and Africa has witnessed a huge surge in the last two decades. The market has seen a growth of more than 100% since 2000 due to the strong economic growth, shifting lifestyles with rising incomes, increasing young population, and high incoming tourists in the region. 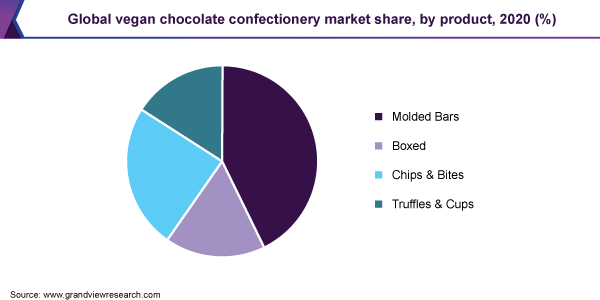 The chips & bites segment is anticipated to register the fastest CAGR from 2021 to 2028. Chips & bites are primarily used for cooking purposes. With the rising demand for premium bakery products for various festivals as well as for small occasions, the demand for chips & bites is also rising. The trend of home cooking and preparing uncommon dishes, especially bakery items, while all the bakeries and restaurants were shut, was observed across the globe. The adoption of the product is increasing remarkably among millennials and centennials. Therefore, manufacturers in the industry have been introducing new products targeting these age groups.

North America accounted for the largest revenue share of over 37% in 2020 and will expand further at a steady CAGR from 2021 to 2028. The rising vegan population across the region is estimated to drive market growth. Asia Pacific is expected to be the fastest-growing regional market during the forecast period. Asia is the most populous continent in the world with more than half of the world’s population and sets up a positive note when it comes to influencing food trends around the world.

China, Japan, Taipei, India, Singapore, Sri Lanka, and South Korea are the key markets of the region. With the increasing trend of veganism in the aforementioned economies of the region, key players, as well as new entrants in the industry, are launching vegan products. For instance, in March 2021, MilkinOats, an India-based oat milk startup, launched its first homegrown oat milk-based vegan milk chocolate confectionery bars.

The market is characterized by the presence of a few well-established and several small- and medium-scale players. The manufacturing companies have been launching new products to attract more customers. For instance, in September 2020, Lindt & Sprungli inaugurated the Lindt Home of Chocolate in Switzerland. The facility showcases a unique chocolate competence center, attractive museum, and open-view production plant. Some of the key players operating in the global vegan chocolate confectionery market include:

This report forecasts revenue growth at global, regional, and country levels and provides an analysis of the latest industry trends in each of the sub-segments from 2016 to 2028. For the purpose of this study, Grand View Research has segmented the global vegan chocolate confectionery market report on the basis of product, type, distribution channel, and region:

How big is the vegan chocolate confectionery market?

b. The global vegan chocolate confectionery market size was estimated at USD 467.2 million in 2020 and is expected to reach USD 535.6 million in 2021.

What is the vegan chocolate confectionery market growth?

b. North America accounted for the largest revenue share of over 37% in 2020 and will expand further at a steady CAGR from 2021 to 2028 in the vegan chocolate confectionery market.

Who are the key players in the vegan chocolate confectionery market?

What are the factors driving the vegan chocolate confectionery market?

b. Key factors that are driving the vegan chocolate confectionery market growth include increasing acceptance of veganism among consumers, especially among millennials and the working population due to the increasing prevalence of lactose intolerance and the rising awareness about animal welfare and the environment.

b. Milk was the largest product segment with a share of more than 39% in 2020 in the vegan chocolate confectionery market.

b. The offline distribution channel segment accounted for the largest share of more than 75% in 2020 in the vegan chocolate confectionery market.

b. Molded bars held the largest revenue share of more than 42% in 2020 and is expected to maintain the leading position over the forecast period in the vegan chocolate confectionery market.