The global veterinary biomarkers market size was estimated at USD 716.9 million in 2021 and is expected to expand at a compound annual growth rate (CAGR) of 12.5% from 2022 to 2030. The increasing prevalence of chronic conditions such as cancer and cardiovascular diseases in animals is fueling the demand for biomarker-based assay diagnostic kits in veterinary applications, to predict the disease in its early stages. The R&D activities implemented by key companies to enhance biomarker portfolios are anticipated to boost the market growth. In addition, the growing companion animal population and rising pet adoption rates are other factors boosting the growth of the market for veterinary biomarkers. For instance, in November 2021, American Veterinary Medical Association reported that the companion animal population has increased significantly from 2016 to 2020. 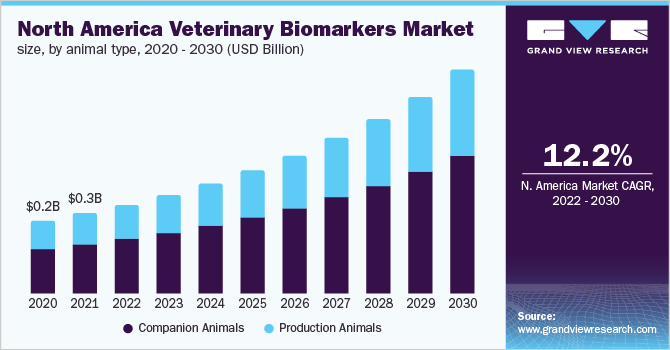 The COVID-19 pandemic has resulted in a market decline, especially in 2020. This unfavorable impact is mainly due to the lockdown declaration in various countries and respective restricted access to and closure of veterinary services. The pandemic has created barriers among animal owners in accessing better veterinary care due to the forced limitation and cancellation of veterinary appointments. According to American Veterinary Medical Association, in the U.S., the veterinary service during the pandemic has been a challenge for veterinarians.  However, veterinary practices have been considered an essential healthcare business in the country.

The key market players have faced difficult challenges in maintaining veterinary product supply due to the uncertainty of distribution channels. However, the key players and the Government agencies have taken various measures to continue their animal healthcare business throughout the pandemic. For instance, Merck & Co., Inc. took comprehensive measures to overcome the pandemic challenges and has significantly maintained its animal health business. The company reported worldwide sales of USD 12.5 Billion in the final quarter of 2020. This was a 5% increase from the previous year.

Some of the key drivers propelling the veterinary biomarkers market include the increasing adoption of R & D by key companies, expansion of product offerings, increased animal healthcare expenditure, and post-pandemic return to normal. For instance, according to the Insurance Information Institute, Inc., pet care expenditure grew from USD 53.3 in 2012 to USD 123.6 in 2021. Out of which, nearly USD 1,480 is spent per dog and USD 943 is spent per cat in a year. Similarly, as per FEDIAF, in 2020 nearly 21.8 billion is spent on pet-food products and 21.2 billion is spent on other pet-related services and products in Europe. These affirmative factors are attributed to the growth of the market during the forecast period.

The companion animals segment dominated the market for veterinary biomarkers in 2021. This is due to the rising adoption rates of dogs, and the significant disease prevalence rates that were seen among them. According to American Veterinary Medical Association, 45% of American households owned dogs in 2020. Similarly, according to the European Pet Food Industry, nearly 88 million households in Europe owned a pet, and the cat population rate in the region was estimated to be 110 million followed by dogs with 90 million in 2020. In addition, the COVID-19 pandemic has encouraged most people in the world to adopt companion animals for psychological comfort.

The biomarkers, kits, and reagents segment held the largest revenue share in 2021. This is owing to the wide availability of major brands of biomarkers and test kits launched by key players in the market. The veterinarians prefer sensitive and accurate disease diagnostic approaches using biomarker test kits to understand the progression of the disorder and to provide specific treatments targeting the biological indicator of the disease. In addition, the growing awareness of biomarker application in the veterinary field in developing countries is fueling the growth of the market for veterinary biomarkers in recent years.

The preclinical research segment held a significant market share in 2021 and is expected to witness the fastest CAGR during the forecast period. This is owing to the increasing research and development activities in the area of veterinary biomarkers and post-genomic technologies. The advanced strategies initiated by animal health key players to identify novel biomarkers or disease indicators are further enhancing the opportunity for segment growth. For instance, Boehringer Ingelheim announced in April 2022, that the company welcomes any partnership or collaboration to develop novel cancer therapeutic concepts with a specific biomarker-based approach.

The inflammatory and infectious diseases segment held the largest revenue share of over 35% in 2021. This is owing to the growing prevalence of various types of infectious diseases that arises among companion and production animals. The concern of the government to prevent zoonotic disease transmission from animals to humans has led to various diagnostic strategies in many countries. The penetration of biomarker-based diagnostic kits is rising in such activities, thereby widening the scope of the products in the market for veterinary biomarkers. 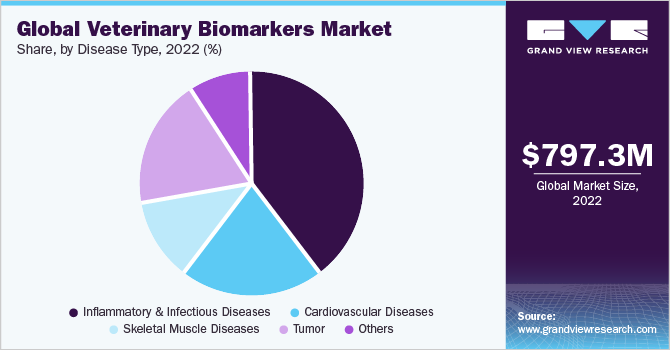 Other disease types such as cardiovascular diseases and cancer are commonly prevailing among animals demanding more attention for proper diagnosis. Most of these diseases are commonly asymptomatic and widely getting ignored until the progression of serious stages. For instance, according to the University of Kentucky, U.K., most of the cattle infected with cancer show no sign, thereby being neglected for timely treatments leading to 5-20% of sudden death cases. Hence, the demand for accurate diagnostic tests to predict progressing diseases and their risk factors in benign stages is widely growing.

North America held more than a 35.0% share of the market in 2021. The high share of the region is due to the significant presence of key players, the adoption of various strategies initiated by key companies to increase market penetration, rising research activities, rising diagnostic rates, and increasing animal population and vet care expenditure. The growing number of veterinary clinics with licensed and trained veterinarians in the countries is another factor to boost the growth of the market for veterinary biomarkers.  According to the AVMA, in 2020 nearly 118,624 licensed veterinarians were estimated in the U.S. which majorly catered to companion animal patients. 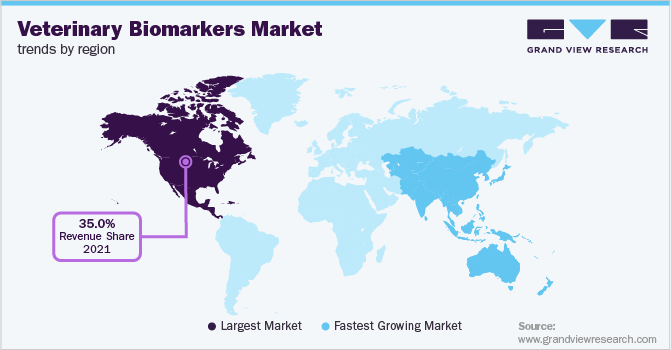 Europe region held the second-largest revenue share in 2021. This is owing to the presence of major key players such as Virbac, ACUVET BIOTECH, and others in European countries. The Asia Pacific region is estimated to grow fast with a CAGR of over 13.66% in the next few years. This is attributable to the rising animal healthcare expenditure and disposable income in key markets coupled with rising awareness for biomarkers in veterinary practices. The growing demand for the proper and timely diagnosis of numerous diseases, and pet humanization in developing countries like India are further boosting the growth of the market for veterinary biomarkers.

The market for veterinary biomarkers is emerging and consolidated. Leading players deploy numerous strategic initiatives that include competitive pricing strategies, partnerships, product expansion, sales and marketing initiatives, and mergers and acquisitions. For instance, in October 2021, Zoetis opened a new manufacturing site in Ireland. This expanded its capacity for the production of monoclonal antibodies. Similarly, the manufacturers are launching novel biomarker-based products that boost their leadership position in the industry.  For instance, in August 2019, Zoetis launched Stablelab hand-held biomarker reader, which detects the Serum Amyloid A biomarker to diagnose inflammation conditions in horses. It expanded the equine portfolio of the company. Such activities are increasing their share in the industry. Some of the prominent players in the veterinary biomarkers market include:

This report forecasts revenue growth at the global, regional, and country levels and analyzes the latest industry trends in each sub-segments from 2017 to 2030. For the purpose of this report, Grand View Research has segmented the global veterinary biomarkers market report based on animal type, product type, application, disease type, and region: 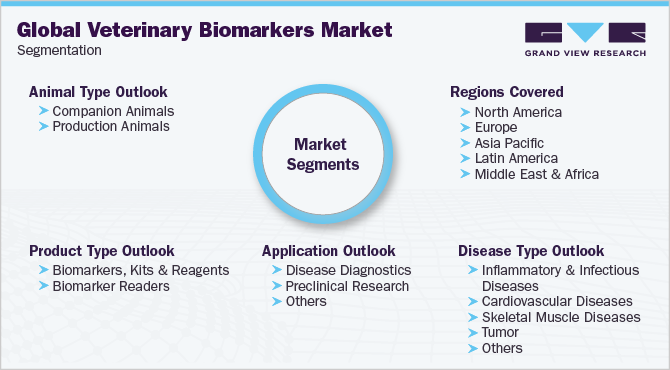 How big is the veterinary biomarkers market?

b. The global veterinary biomarkers market size was estimated at USD 716.9 million in 2021 and is expected to reach USD 0.8 billion in 2022

What is the veterinary biomarkers market growth?

Which segment accounted for the largest veterinary biomarkers market share?

b. North America dominated the veterinary biomarkers market with a share of over 35% in 2021. This is attributable to the significant advancements in research & development of veterinary science in the region coupled with the presence of major players

Who are the key players in the veterinary biomarkers market?

What are the factors driving the veterinary biomarkers market?

b. Key factors that are driving the veterinary biomarkers market growth include the growing prevalence of various diseases in animals and the requirement of specific diagnostic approaches coupled with the increasing R&D activities in post-genomic technologies and the growing animal population with healthcare expenditures