The global vibration control system market size was valued at USD 4.65 billion in 2021 and is expected to expand at a compound annual growth rate (CAGR) of 6.2% from 2022 to 2030. The market is expected to witness an increase in demand at a global level owing to the growing emphasis on the mechanical stability and balancing of industrial machinery and automobiles. Vibration Control Systems (VCS) is an isolation system that vigorously responds to incoming vibrations. These systems are used to control vibrations in static or moving machines and help to reduce friction and other disruptions. 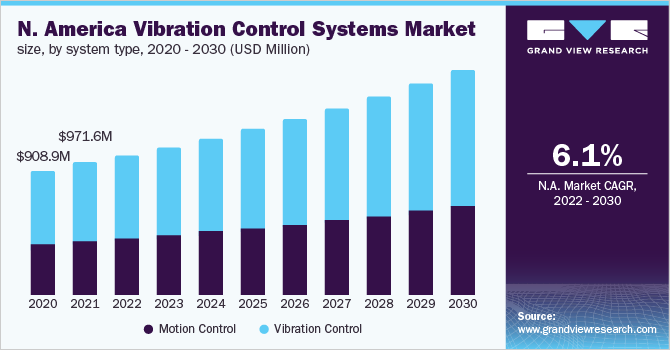 Also, these systems safeguard the operation of machine parts, generation of heat, wear & tear, loss of energy, and cracks & breakage, among others. They are used in various industries such as automotive, aero & defense, electrical & electronics, oil & gas, and healthcare, among others. The rapidly growing automotive and aviation industries are expected to drive market growth over the forecast period. The rapid development of next-generation VCS for aircraft to reduce vibration is a primary factor driving the market growth. Also, in the automotive industry, anti-vibration systems such as bushing and mounting are used to reduce quivers. These systems help in increasing vehicle efficiency as well as the life span of the components. VCSs were initially designed for use in automotive and electrical equipment. These systems are now being used in aerospace & defense, oil & gas, and mining & quarrying, among others.

Furthermore, these systems are gaining ground in the healthcare sector as well. Pharmaceutical companies have started using these mechanisms to mitigate the impacts of tremble and quivers on sensitive equipment such as Magnetic Resonance Imaging (MRIs) and DNA sequencing microarrays, among others in healthcare and scientific institutions. On the other hand, factors such as strict industry regulations, high costs of systems, and component reliability issues are anticipated to hinder the market growth over the years.

The strict regulations and policies set by the U.S. defense and airline authorities are compelling manufacturers of VCS to upgrade their design. Also, in recent years, the aviation industry started using anti-vibration control systems as previously the reliability of various components, including actuators, sensors, and controllers was comparatively less, thus, inhibiting the growth of the market. However, the rising demand for self-controlling, smart, and adaptive VCS, along with technological development, such as web-based continuous machine condition monitoring and active Noise and Vibration Control (ANVC) systems in aircraft, is an opportunity for market growth over the coming years.

The vibration control systems segment is expected to emerge as the fastest-growing segment with a CAGR of over 6% during the forecast period. The growth is attributed to the rising demand for tremble and quiver controls in various oil & gas and power plant industries. These mechanisms use multiple anti-vibration devices such as mounts, bushes, springs, washers, hangers, absorbers, and dampers to isolate the effects of tremble and shock in power plants. The vibration control segment is further bifurcated into various sub-segments, including isolating pads, isolators, and others.

VCS with motion control type is anticipated to register considerable growth by 2030. This growth is ascribed to the growing automotive and aerospace sector. Motion control systems, which are used in fixed-wing aircraft, help in reducing the tremble and quiver in the helicopter fuselage generated by the main rotor. Besides, the increasing need for passenger comfort and convenience in aircraft is also expected to spur the segment growth over the years.

In 2021, the manufacturing segment accounted for approximately 25.09% of the global market share. The electrical & electronics vertical is anticipated to offer significant growth opportunities for all players involved in the value chain on the back of the increasing manufacturing of industrial machinery across the globe. The vibration control mechanisms in the electronics industry consist of vibration sensors, control electronics, and actuators, which create a feedback loop in the mechanism and protect structures and equipment from impact forces. 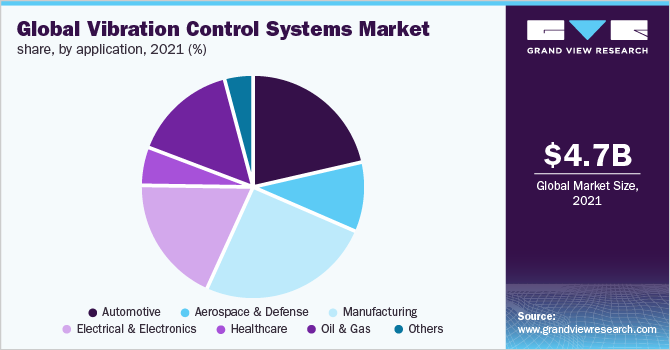 Antivibration components for industrial applications include cylindrical buffers, bushes, cylindrical mounts, level mounts, and sandwich mounts, among others. These components provide passive quiver isolation on electronic instruments, measuring equipment, and test cells. Other than electronic & electrical applications, these mechanisms are used in multiple verticals such as mining & quarrying, and food manufacturing, among others.

Vibration control systems used in the aerospace & defense industry are anticipated to witness considerable growth over the forecast period. The growth is attributed to factors such as the need for enhanced aircraft performance, which helps to decrease the quivers causing damage to the aircraft fuselage, windshield, windows, doors, and cargoes. These anti-vibration mechanisms use semi-active hydraulic lag dampers and Active Vibration Control (AVC) for vibration control in aircraft. These mechanisms involve the use of multiple airframes mounted force actuators to cancel the quiver and shaking moment.

Europe accounted for the largest market share of 23.91% in 2021. Asia Pacific is expected to emerge as the fastest-growing region over the forecast period with a CAGR of 8.1%. The growth can be attributed to rapid industrialization, primarily in China, Japan, and India. Moreover, major manufacturers in the market are from China, because of the low capital cost required in the country and developments in technology in the market. Besides, Latin America is expected to grow at a considerable growth over the forecast period, owing to continuous technological upgrades in the VCS. Wherein, Brazil is considerably contributing to the market growth, owing to the rapid development in the oil & gas, textile, automotive, and machinery & equipment sectors.

North America held a significant market share of more than 20.86% in 2021 of the global revenue. The growth is attributed to the growing demand for healthcare, aviation, and defense anti-vibration systems in the U.S. and Canada. In the current market scenario, the U.S. dominates the regional market. Large-scale adoption of these mechanisms can be seen in the U.S. electronics & electrical, automotive, and food manufacturing sectors. Being early adopters of vibration control technology, North America is home to a large number of vibration controlling manufacturers and solution providers.

Vibration control systems providers are focusing on research & development, which in turn would help increase their market presence. For instance, in March 2019, Trelleborg AB announced an opening of its anti-vibration mechanisms manufacturing facility in India (Bengaluru). This expansion was intended to expand Trelleborg’s production facilities for anti-vibration systems in the region and help the local production of Trelleborg’s portfolio for the railway sector. Some of the prominent players in the global vibration control system market include:

This report forecasts revenue growth at the global, regional, and country levels and provides an analysis of the latest industry trends in each of the sub-segments from 2017 to 2030. For this study, Grand View Research has segmented the global vibration control system market report based on system type, application, and region:

How big is the vibration control system market?

Which segment (this can be region, product or application) accounted for the largest vibration control system market share?

b. Europe dominated the vibration control system market with a share of 23.19% in 2021. This is attributable to the growing demand for healthcare, aviation, and defense anti-vibration systems in U.K and Germany.

Who are the key players in the vibration control system market?

What are the factors driving the vibration control system market?

b. Key factors that are driving the vibration control system market growth include growing emphasis on the mechanical stability and balancing of industrial machinery and automobiles, growing automotive as well as the aviation industry, rising demand for self-controlling smart & adaptive VCS, along with technological developments, such as web-based continuous machine condition monitoring and Active Noise and Vibration Control (ANVC) systems in aircraft.