The global video player market size was valued at USD 458.60 million in 2021 and is expected to register a CAGR of -12.6% from 2022 to 2028. This can be attributed to the increasing inclination of the consumers for streaming video website over video players in developed region such as North America. The cost of Blu-ray players has decreased considerably in the last few years. The existence of high competition in the market and prompt technological advancements in Blu-ray technology has resulted in the price drop. Also, the entrainment and media industry has gone under rapid makeover during the last decade. Advanced video/audio systems such as Blu-ray players, are achieving massive adoption with latest advancements being done in the chip and display technology. Mainly, there is strong need in the entertainment world to increase the quality of the content. It is also bringing major developments in the electronic devices segment. 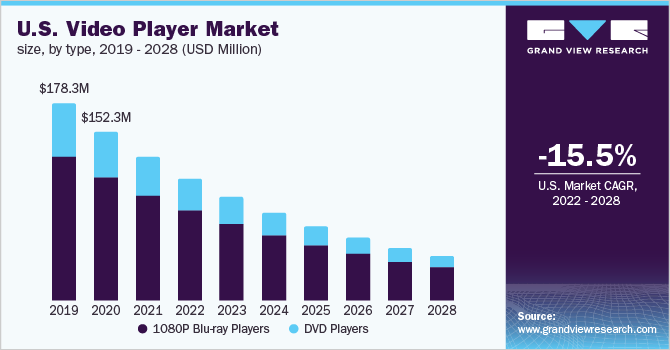 Furthermore, the persistent combination of internet technologies and IT with the entertainment and media systems may generate growth opportunities in the video player market. But, with the growing adoption of the online streaming channel for recreation and media purposes, the video player market is experiencing a decrease in sales, which is a main restraining factor for the market.

Rising investment by key players in the latest technologies to launch innovative products is further expected to increase the industry sales. However, the rise in popularity of other mediums of entertainment such as streaming websites, OTT (over-the-top) platforms, and premium subscription television (Pay TV) is the major restraining factor for the video player market growth, during the forecast period.

The penetration of video players in households has been decreasing continuously thereby hampering the market demand. The behaviors of consumers towards home entertainment have been changing drastically and have shifted towards other streaming services. This resulted in the availability of a minor number of people purchasing packaged media and thus resulting in a decline in the video player market. Moreover, the growing number of customers purchasing materials in the form of digital copies and rising services for streaming is further declining the sales of video players.

The sales of video players have been declining for the past decade and it has been further prompted by COVID-19. The outbreak of COVID-19 resulted in high adoption of online services, increased subscriptions, plus additional reasons to increase in the online streaming market. Whereas the adoption of streaming services has fueled the decline of video players and is expected to decline rapidly during the forecast period.

Furthermore, due to the situation of lockdown across the globe, the transportation and supply chains were disrupted, which further stopped the shipment of video player units, thus contributing to the decline. In conclusion, despite the pandemic, the video player market has declined and will continue to decline throughout the forecast period.

The DVD player type segment is also likely to showcase lower growth in the market. The demand for this DVD player, used for home entertainment purposes, is augmenting from the emerging economies such as China, and India, owing to its lower cost as compared to Blu-ray players.

Offline distribution channel segment contributed to the highest revenue share of more than 80.0%in the global market during 2021. The segment includes specialty stores, hypermarket, supermarket, independent retail stores; etc. Design of the organized retail sector has guaranteed better visibility of the consumer electronic products. Moreover, growing organized retail sector in emerging economies such as China, and Japan may further enrich the demand for video player during the forecast period. 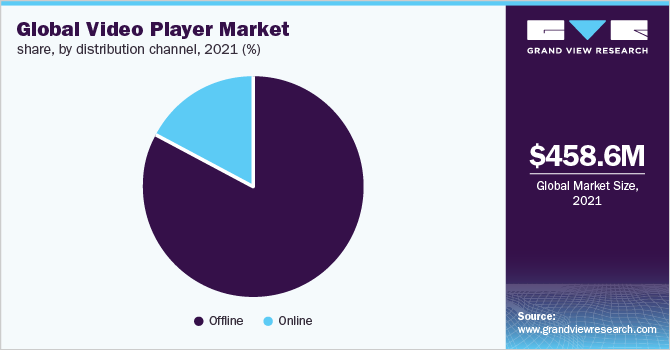 The online segment is expected to register a 10.8% CAGR from 2022 to 2028. This can be credited to the growing penetration of the internet in developing countries. Leading video player manufacturers are tying up with online retailers having an objective to reach out to the new buyer’s base.

North America holds the majority of industry share in this market. This can be credited to the rapid adoption of Blu-ray technology appliances in this region. However, the growing penetration of 4K HD Blu-ray players in homes and several other places is hampering the growth of the video player market. Also, major key players are ending production of DVD and Blu-ray player series within this region.

Asia Pacific is expected to showcase a lower growth rate from 2022 to 2028. Moreover, the growing middle-class working population and rising disposable income in this region is also the main factor for persistent demand for video players, which will substantially help to propel the video player market growth. Furthermore, with the presence of key players, like Panasonic, Sony, LG, and many others has played a very vital role in the growth of the market, within this region.

Key players are focusing on introducing new advanced products to sustain in this market with a competitive pricing strategy. Furthermore, key players are merging and collaborating to increase their product portfolio along with expansions in the market. Some of the prominent companies in the global video player market include:

This report forecasts revenue growth at global, regional & country levels and provides an analysis of the latest trends and opportunities in each of the sub-segments from 2017 to 2028. For this study, Grand View Research has segmented the global Video Player Market report based on the type, distribution channel, and region.

How big is the video player market?

What is the video player market growth?

Which region accounted for the largest video player market share?

b. North America dominated the video player market with a share of 32.8% in 2021. This is attributable to the rapid adoption of Blu-ray technology appliances in this region.

Who are the key players in video player market?

What are the factors driving the video player market?

b. Key factors that are contributing to the decline of the video player market include the increasing inclination of consumers to streaming video websites over video players and the rising number of other channels of entertainment.