The global viral vectors & plasmid DNA manufacturing market size was estimated at USD 368.3 million in 2019 and is projected to expand at a CAGR of 14.52% during the forecast period. Advent of advanced therapies including gene therapy that employs the use of various viral and non-viral vectors has paved a way for the treatment of several heritable and acquired diseases that previously lacked effective treatment modalities. Post the approval of Novartis’s Zolgensma, drug developers have begun considering these new areas of treatment as a sustainable business model. Thus, the speculated accelerating investment is expected to drive the growth. 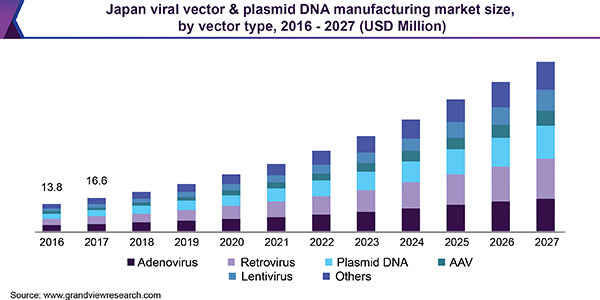 High transfection efficiency, effective gene delivery, and stable gene expression have made viral vectors a preferred choice for gene transfer. The rising preference for viral vectors in gene transfer is evident by the increase in registration of clinical trials on viral vector-mediated gene therapy. In the first quarter of 2019, around 372 clinical trials were registered that involved vector-mediated gene therapy production.

Considering the efficiency and clinical benefits of Advanced Therapies Medicinal Products (ATMPs), various market stakeholders are constantly designing strategies to overcome the existing challenges and spur ATMPs usage. Moreover, the recent announcement by the Food and Drug Administration (FDA) commissioner about improving regulatory support for the cell and gene therapy sector to keep up the pace with the clinical progress has substantiated the anticipated success of ATMPs.

Vector manufacturing is one of the most complex and resource-intensive processes in ATMPs manufacturing. In October 2019, GE Healthcare Life Sciences launched FlexFactory single-use biomanufacturing platform-based KUBio box as a fully-integrated and flexible biomanufacturing environment to affectively address the aforementioned challenge and speed-up the development of viral vector-based gene therapies.

However, expensive and highly regulated processes for vector production in large quantities required for large-scale clinical trials are the key challenges cited by industry experts. Moreover, the shortfall of expertise in terms of scale, complexities, and quality assurance for vector production has hampered in-house manufacturing to a certain extent. The proliferation of contract manufacturers has effectively addressed the above-articulated manufacturing challenges by offering a wide array of services for vector manufacturing, thus driving the market growth.

Targeted delivery, efficient transduction, and controlled gene expression are some of the key factors taken into consideration while manufacturing vectors. Viral vectors are increasingly being employed in the ongoing clinical trials owing to their efficiency in gene delivery. Out of all the viral vectors, adenovirus and retrovirus are most commonly used within research settings across the globe.

Factors attributing to the large share of these vectors include integration ability with large transgenes and easy production at high titers. On the other hand, lentiviral vectors are expected to emerge as a high revenue-generating segment in the forthcoming years. This anticipated growth can be attributed to the success of the lentiviral-based gene therapy product in 2017.

Post this approval, a substantial number of companies begun seeking support from contract manufacturers for the production of lentivirus-based products. For instance, in June 2019, Servier, a pharmaceutical company governed by a non-profit foundation, selected Yposkesi for GMP manufacturing to advance the development of its allogenic CART cell technology.

The growing necessity of vectors to meet the rising demand for robust therapies has pronounced the need for optimization of upstream processing and downstream processing workflows. Virus preparation methods at small-scale involve steps that are difficult to scale-up and are often considered tedious.

This has resulted in the investigation and optimization of several scalable commercial processes to ensure the number of viruses while retaining their critical quality attributes. Downstream processing accounted for the major share owing to highly complex procedures carried out for polishing and purification of clinical-grade final products. Moreover, the high cost of purification techniques has led to the high revenue generation in this segment.

Upstream processing entails infecting cells with the virus, cultivation of cells, and harvesting the virus from cells. The development of advanced products, such as ambr 15 microbioreactor system, from Sartorius applicable in high-throughput upstream process development, is expected to drive the segment. The product ambr, allows efficient cell culture processing with automated experimental setup and sampling, which requires less labor and laboratory space and time taken for cleaning and sterilization is also very less.

Antisense and RNAi, gene therapies are the leading application of viral and plasmid vector in terms of revenue share. Small interfering RNAs (siRNAs) are currently considered significant tools for post-transcriptional gene silencing during a genetic analysis of cells. The presence of pipeline products is expected to boost growth of this segment over the forecast period.

Furthermore, the emergence of retroviral vectors as a viable solution for addressing the low transfection efficiency-related drawbacks of plasmid-based systems is one of the key development in antisense and RNAi production. Growing usage of AAV vectors for delivery of siRNA in mammalian cells is driving revenue in this segment.

On the other hand, the approval of gene therapy products in the U.S. has fueled the necessity for completely scalable, clinical-grade Good Manufacturing Practice (GMP) solutions to develop gene therapies for large patient groups who need high vector doses. A growing need for large quantities of vectors for gene therapy development has led to the introduction of more scalable and cost-effective manufacturing processes.

Pharmaceutical and biotechnology companies accounted for the largest share in the viral vectors & plasmid DNA manufacturing market in 2019. This can be attributed to the continuous introduction of advanced therapies coupled with a subsequent increase in the number of gene therapy-based discovery programs by companies. The number of biotech companies employing vectors for therapeutics production continues to increase over the period of time.

Some biotech companies using adeno-associated viral vectors include Lysogene, GenSight, and Theravectys. Biotech companies focus on improving the vector production, which in turn is expected to benefit both the biotech as well as pharma companies. For example, scientists at GE Healthcare have developed a process that employs modern tools and technologies for adenovirus production, from upstream processing to downstream purification. The developed process can be easily scaled and is compatible with both single-use and multi-use process equipment.

Viral vectors are being studied for both preventive and therapeutic applications in cancer. Viral vector-based immunization with anticancer antigens or delivery of toxic or anticancer genes are some key areas or research that have shown steady progress in recent times. Furthermore, recent approvals of lentiviral vector-based CAR-T cell therapies for Acute Lymphoblastic Leukemia (ALL) and large B cell lymphoma have attracted considerable attention from key end-users. This has resulted in significant proliferation in the cancer-based pipeline projects on advanced therapies. 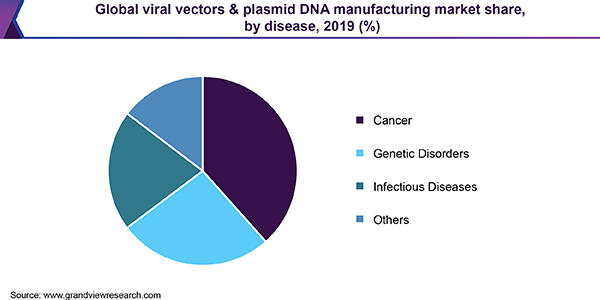 Currently, around two-thirds of the research in gene therapy is focused on oncology. These factors have contributed in the dominance of cancer over other disease areas. Rare and genetic diseases are another key area of interest in gene therapy. This is because nearly 350 million patients are diagnosed globally with a rare disease, and there is a lack of effective treatment modalities. The growing burden of genetic diseases is a major driver for investment in viral vector manufacturing to target genetic disease.

Recent FDA approval of advanced therapies such as Kymriah (tisagenlecleucel) and Yescarta is one of the key factors contributing to the largest revenue share of the U.S. market. These approvals have resulted in an increase in the number of companies operating in this area in U.S. In 2017, an estimated 391 gene therapy companies were operating in the U.S. By September 2019, around 100 more companies including big pharma companies entered the market.

In March 2019, Merck signed a non-binding Memorandum of Understanding with China-based GenScript, under which Merck planned to deliver GenScript with comprehensive services, products, and training on plasmid and viral vector manufacturing. With such collaboration, Asian companies aimed at offering their overseas and local customers with improved cGMP manufacturing capabilities.

The market is witnessing high competition with the presence of few established players and a growing number of mid-tier companies and startups. The companies are adopting various business strategies, such as strategic alliances with biopharmaceutical companies and research institutes, to gain a competitive edge.

In addition, expansion of production sites and operational capacity in markets such as the U.S. and U.K. to cater to the growing demand for viral vectors is anticipated to accelerate the revenue share of the companies. Furthermore, high-tier companies are marking the entry in this space through acquisitions of emerging players. For example, in May 2019, Thermo Fisher acquired Brammer Bio and in August 2019, FUJIFILM acquired Biogen (Denmark) Manufacturing ApS.

This report forecasts revenue growth at global, regional, and country levels and provides an analysis of the latest industry trends in each of the sub-segments from 2016 to 2027. For the purpose of this study, Grand View Research has segmented the global viral vectors & plasmid DNA manufacturing market report on the basis of vector type, workflow, application, end-use, disease, and region:

How big is the viral vectors and plasmid DNA manufacturing market?

b. The global viral vectors and plasmid DNA manufacturing market size was estimated at USD 368.3 million in 2019 and is expected to reach USD 428.4 million in 2020.

What is the viral vectors and plasmid dna manufacturing market growth?

b. Adenovirus is expected to witness a compound annual growth rate of 22.4% owing to the integration ability with large transgenes and easy production at high titers.

Who are the key companies/players in viral vectors and plasmid dna manufacturing market?

What is the viral vectors and plasmid DNA manufacturing market report scope?