The global virtual reality headset market size was valued at USD 5.02 billion in 2018 and is expected to register a CAGR of 21.5% over the forecast period, from 2019 to 2025. Virtual Reality (VR) headsets offer virtual reality experience for Three-Dimensional (3D) simulation with computerized technology. Additionally, they create an artificial environment mainly used for media and entertainment, gaming, healthcare, retail, and other such applications.

Virtual reality has gained prominence over the last few years owing to the technological advancements and launch of inventive devices targeted primarily at the gaming industry. Continuous research is being conducted to develop low cost, wearable VR solutions for the mass market. Virtual reality has an enormous potential to be incorporated into a wide range of applications, including healthcare, education, and industrial prototyping. All these factors are anticipated to contribute to the growth of the virtual reality headsetmarket. 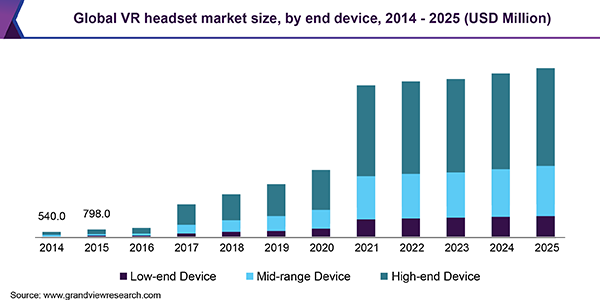 Increasing compatibility of virtual reality with smartphones, along with growth in the mobile gaming market, is expected to drive the demand for VR headset over the forecast period. In 2018, gaming and media and entertainment applications cumulatively accounted for more than half of the market share. VR headsets have a massive impact on the retail industry, as the technology advancements are expected to change the shopping experience for the consumers. The technology mainly fulfills three critical needs in retail-accessibility, consumer engagement, and sharing the product information-in a better way. In addition, the usage of virtual reality in retail stores is expected to offer high convenience and speedy digital shopping experience, over the forecast period.

There is a growing convergence between augmented reality, virtual reality, and wearable devices; with changing application dynamics of technology, allowing consumers experience immersive and interactive experience. For instance, consumers can experience virtual reality with the help of their mobile phones. Google offers affordable Google Cardboard for smartphones to experience virtual reality. Thus, growing sale of smartphones is expected to drive the VR headset market growth. The VR system consoles have faced significant competition from the mobile Operating Systems (OS) platforms. Mobile phones offer a cheaper platform for gaming and with VR peripherals like Google Cardboard, smartphones can turn into VR gaming devices.

Technological developments and advancements in networking and connectivity are expected to fuel the demand for VR headset over the next few years. Making virtual reality experience more real, serves as a key driver for rapid technological advancements and innovation in the market. Among all, eye tracking is one of the key areas being explored. Eye-tracking reduces complexity while displaying virtual reality scenes. For instance: In 2019, one of the developers of virtual reality Pimax released an eye-tracking module for their ultra-wide FOV, 8K, and 5K headsets. It is expected to provide dual display 2K resolution.

The companies are investing in the high-end device as they provide high quality integrated self-contained tracking. Increasing adoption of virtual reality technology and introduction of various advanced high-end VR headsets is anticipated to bode well for the demand in near future. Currently, ongoing investments for launching high-end electronics products are expected to create significant growth opportunities for the manufacturers. They also focus on providing headset devices at affordable price, to remain price competitive in the market. This is expected to create significant traction for affordable high-end devices over the forecast period.

Standalone PC-connected segment accounted for the largest market share in 2018. The segment is expected to showcase the fastest CAGR over the forecast period. In recent years, standalone PC-connected headsets have witnessed increased sales than the smartphone and standalone virtual reality headsets. PC-connected standalone devices are considered the most economical among the three. However, the manufacturers are more focused on offering standalone devices. Enterprise VR is evolving rapidly and many companies are looking forward to make higher investments in R&D activities to provide hardware solution for various applications.

Over the years, high growth is registered in the sales of smartphone-enabled and PC-enabled virtual reality headsets. These are expected to remain the most popular devices to experience virtual reality. Additionally, VR headset brands, including Samsung Gear, Facebook Oculus, Google Cardboard, HTC Vive, and others offer various application-oriented headsets with price variations. Low-cost, screenless VR headsets that need to be attached with the smartphones, are expected to showcase a decline in demand over the forecast period. 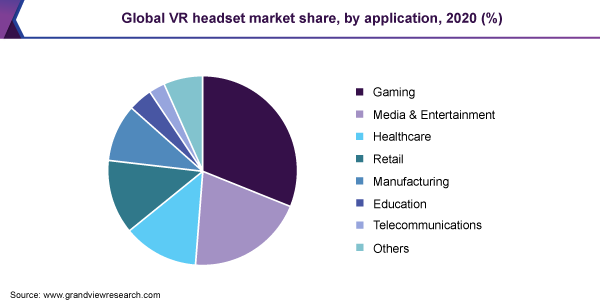 In the past few years, the gaming industry has remained a key revenue driver for VR headset, due to the high inclination of the millennial and generation Z. Currently, the gamers have a high average price spending on advancing their gaming consoles or PC, than individuals who do not play games. This factor has in turn encouraged the companies to invest in VR headset games and well within the affordable price for gamers. Furthermore, the retail industry has also shown high demand, as retailers are incorporating headsets into the stores to enhance the shopping experience. For instance, companies, including e-commerce giants, such as Alibaba, Amazon, and others, are considering making the concept of virtual reality trial a reality in the next few years.

North America followed by Europe, has shown high adoption of the VR device in the retail and manufacturing industry. In 2018, Asia Pacific accounted for the largest market share, with China accounting for near to 20% of the overall global market. Additionally, Asia Pacific is projected to deliver the fastest growth over the forecast period. In developing countries, with continuing technological advancements and rising demand for high-end electronic devices create significant traction for the market. Rise in the retail and manufacturing industries with increasing investments by the manufacturers to enhance the customer experience in developing countries is expected to boost the virtual reality (VR) headset market growth. Increasing adoption of VR technology in these countries also depends on the declining prices of headsets with their own processor and screen. Governments from the developed countries, such as the U.S. and Germany, are spending a significant amount on VR headsets in defense and military sector.

Continuous technological advancements and the rising popularity of VR headsets in media and entertainment application is anticipated to support the market growth. With initial success and revenue generation from gaming segment guided manufacturers to capitalize on this particular segment by providing related hardware, software, and content services. Collaboration and partnership with the domestic players are some of the major strategies adopted by the global market players. VR headset manufacturers have been adopting various advanced technologies, such as motion sensing, Blu-ray, 4K, and HD quality video to cater to the changing consumer demand.

This report forecasts revenue growth at global, regional, and country level and provides an analysis of the latest industry trends in each of the sub-segments from 2014 to 2025. For this study, Grand View Research has segmented the global virtual reality headset market report based on the end device, product type, application, and region: