The global voice-based payments market size was valued at USD 5.89 billion in 2021 and is expected to expand at a compound annual growth rate (CAGR) of 10.9% from 2022 to 2030. The continued rollout of voice-based payments by financial institutions and retailers to seamlessly access personal data and understand customer behavior is expected to drive the growth of the market. Mobile payments platforms, such as Zelle, PayPal, and Venmo, have started rolling out voice-activated controls for their customers to carry out financial and banking functions. Conventional banks, such as Wells Fargo, are also adding conversational voice interfaces to their mobile banking apps to help their customers in accessing all the banking services. 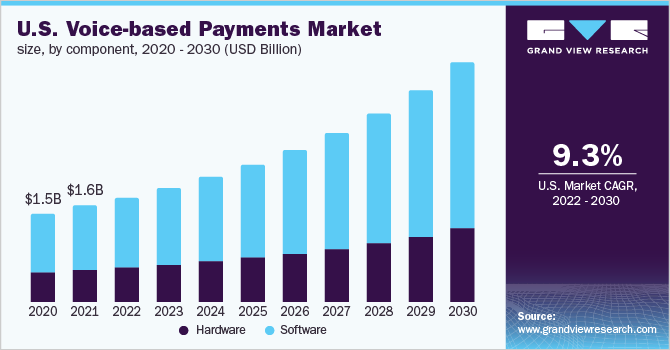 The growing adoption of peer-to-peer voice-based payments worldwide is expected to drive the growth of the market during the forecast period. Several banks, such as Barclays and Royal Bank of Canada, among others, have started offering voice-enabled peer-to-peer payments to their customers. Barclays allows its customers to make voice-based payments using Siri, the virtual assistant offered as part of Apple Inc.’s operating systems. Similarly, Google Assistant allows Google Pay users to make peer-to-peer payments using voice commands.

The integration of voice-based payment systems in cars is also emerging as one of the major factors driving the growth of the market. Innovative services are being introduced aggressively to allow drivers to use voice assistants to pay for gas and make reservations in restaurants, among other applications, from within their cars. For instance, in January 2021, Amazon announced the launch of Alexa Custom Assistant, a service that allows device manufacturers and automakers to build their digital assistants. Fiat Chrysler would be the first automaker to use this service to develop a digital assistant for select vehicles.

However, the growing concerns over the level of security offered by voice-based payments are expected to restrain the market growth during the forecast period. The inability of voice assistants to understand different accents, especially non-American accents, is also expected to hinder the market expansion. On the other hand, the software and hardware at the point-of-sale terminals need to be upgraded if they were to support voice-activated technology. As such, the costs involved in integrating voice-based payments with Bluetooth and WiFi-enabled systems at the point-of-sale terminals equally do not bode well for the growth of the market.

The COVID-19 pandemic is expected to play a decisive role in driving the market growth during the forecast period. The popularity of contactless payment methods is growing as people worldwide are putting a strong emphasis on avoiding any potential exposure to coronavirus through contaminated surfaces. The growing preference for contactless payment solutions during the pandemic is particularly opening opportunities for rolling out voice-based payments. At the same time, several retail stores are also adopting voice-based payments as part of their efforts to ensure a safe and secure way of payment for the customers.

The software segment dominated the market in 2021 and accounted for a share of more than 66.0% of the global revenue. The growing integration of virtual assistants, such as Google Assistant, Alexa, and Siri, into the voice-based payment solutions for conventional banking is expected to drive the segment. The aggressive efforts being pursued by various voice-based payment companies to enhance their respective products also bode well for the growth of the segment. For instance, in November 2021, Google announced the launch of speech-to-text features that allow users to use voice input to add their account numbers to the app to initiate payments.

The large enterprises segment dominated the market in 2021 and accounted for a share of more than 59.0% of the global revenue. The demand for voice-based payments is particularly rising among large enterprises as several large enterprises are trying aggressively to adopt contactless payment solutions. For instance, in April 2019, Walmart announced a partnership with Google. The partnership envisaged rolling out Walmart Voice Order, a new voice ordering capability that works across various Google Assistant-powered platforms.

The small & medium enterprises segment is expected to register the fastest growth during the forecast period. Small banks are typically trying to digitalize their services and enhance the customer experience. Small banks are particularly adopting paperless services for opening bank accounts, thereby driving the need for voice-based payments. Such enhancements being pursued by various banks to gain a competitive edge and strengthen the market position are expected to drive the segment forward.

The BFSI segment dominated the market in 2021 and accounted for a share of over 23.0% of the global revenue. Several banks worldwide are rolling out voice assistants as part of the efforts to streamline their operations and enhance customer experience. For instance, in August 2019, NatWest, a retail banking company, announced plans to trial voice banking with 500 of its customers. The trial envisaged allowing the bank customers to carry out a myriad of simple banking tasks using Google Assistant. 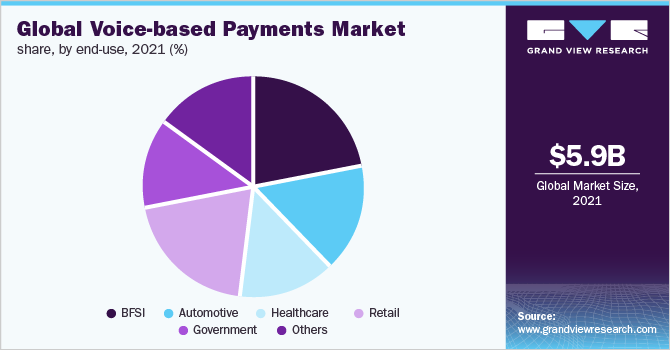 The retail segment is anticipated to expand at a promising CAGR during the forecast period. The rapid growth of voice commerce and the growing preference for touchless payments during the pandemic are among the major factors that are expected to drive the growth of the segment. Voice-based payments are being preferred over cash payments across the retail industry, owing to factors such as accessibility and convenience. According to the Federal Reserve Bank of San Francisco’s The Diary of Consumer Payment Choice study, cash use accounted for 19% of all payments in the U.S. in 2020, down by 7% points from 2019.

North America dominated the voice-based payments market in 2021 and accounted for a share of over 33.0% of the global revenue. The growing preference for contactless payments across North America is expected to accentuate the regional market. MasterCard Contactless Consumer Polling revealed that 51% of the U.S. consumers use some form of contactless payment method and that these consumers have been using cashless payments on an often basis and not just in the wake of the outbreak of the pandemic.

Asia Pacific is expected to expand at the highest CAGR during the forecast period. The growth can be attributed to the growing awareness in countries, such as China, India, and Japan, about the benefits offered by voice-based payments. The aggressive efforts being pursued by various organizations across the Asia Pacific to promote the use of voice-based payments are also expected to contribute to the growth of the segment. For instance, in July 2021, the National Payments Corporation of India (NPCI) announced that it is testing voice-based payments services for feature phones in India. NPCI has already developed digital payment platforms, such as Unified Payments Interface (UPI) and Aadhaar Enabled Payment System (AePS).

The voice-based payments market can be described as a highly competitive market characterized by the presence of several prominent market players. Incumbents of the market are pursuing various strategies, such as strategic partnerships, new product launches, and geographic expansion, among others, as part of the efforts to enhance their offerings. For instance, in May 2021, Cerence, a provider of biometric authentication and voice-based payment services, announced that P97 Networks, a mobile commerce platform provider, has been added to the company's Cerence Pay partner ecosystem. The integration of P97 Networks' mobility services platform would allow Cerence Pay to connect drivers to safe and seamless payments via the P97 mobile commerce platform, which is available to over 30% of the retail fuel sites across the U.S. at present.

Market players are investing aggressively in research & development activities to enhance their product offerings. For instance, in May 2021, the Indian Institute of Technology Madras researchers announced that they will collaborate with the Mobile Payment Forum of India members. The collaboration is aimed to create voice-based payments for digital money transactions. Some of the prominent players in the global voice-based payments market are:

The report forecasts revenue growth at global, regional, and country levels and provides an analysis of the latest industry trends in each of the sub-segments from 2017 to 2030. For this study, Grand View Research has segmented the voice-based payments market based on component, enterprise size, end-use, and region.

How big is the voice-based payments market?

What is the voice-based payments market growth?

Which segment accounted for the largest voice-based payments market share?

b. North America dominated the voice-based payments market with a share of 33.37% in 2021. The growing preference for contactless payments across North America is expected to accentuate the growth of the regional market.

Who are the key players in voice-based payments market?

What are the factors driving the voice-based payments market?

b. Key factors that are driving the voice-based payments market growth include increasing demand for contactless payments and rising demand for voice assistant-enabled devices.