The global water treatment systems market size was valued at USD 23.80 billion in 2016 and is expected to register a CAGR of 7.1% by 2025. This can be attributed to growing water pollution levels, increasing urban population, and rising health awareness. Strict government regulations to curb water contamination are also expected to boost growth over the forecast period. 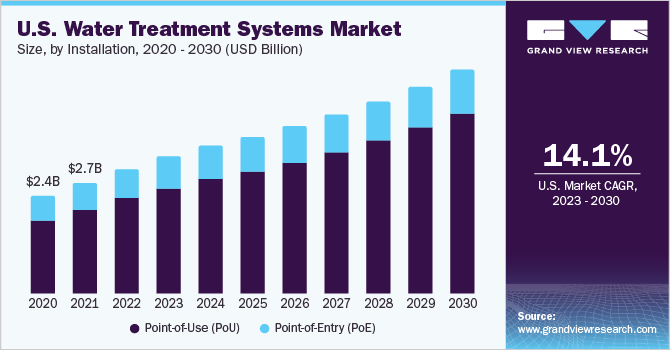 Demand for potable water is witnessing an exponential increase every year, with rising population and pollution levels. Rivers and lakes that have conventionally been sources of drinking water for people are also being affected by alarming levels of pollution. Water treatment units are affordably priced to enhance their reach across varied economic strata of consumers. Growing health awareness in most regions is predicted to enhance market growth over the forecast period.

The Safe Drinking Water Act of 1974, laid down by the U.S. Environment Protection Agency, sets standards for quality of drinking water provided. The agency, along with its partners, implements numerous financial and technical programs to safeguard residents from imminent threat of diseases. Such trends have benefited the U.S. market in the recent past and will continue to do so over the coming years.

Over the last century, industrialization has significantly contributed to polluting rivers and lakes, especially in urban areas. Unsupervised dumping of chemical substances and debris from construction activity have rendered some rivers unfit for use. Water drawn from any source needs to be purified before drinking to avoid contracting diseases such as cholera and giardiasis. Water treatment systems play an important role in safeguarding human life from such illnesses.

Reverse osmosis uses a semi-permeable membrane to eliminate bacteria, harmful molecules, ions, and other harmful materials from water. In this process, pressure is applied to overcome osmotic pressure, which is a colligative property that drives the chemical potential of a solvent.

The distillation systems segment was valued at USD 3.98 billion in 2016 and is expected to witness robust growth over the forecast period. This technology is among the oldest purification methods. Water is boiled till heating point; vapor rises into a condenser and is then cooled, condensed, collected, and stored. This process eliminates most pollutants, which are left in the vessel itself. However, the process is not considered to be completely safe and does entail a more thorough check.

The water treatment systems market is bifurcated into point of use (POU) and point of entry (POE) units. The POU installation segment is expected to exhibit a volume-based CAGR of 16.7% over the forecast period, chiefly due to affordable pricing, along with convenient installation and use of the product line. Faucet mounted filters find wide adoption in developing regions like India and South Africa.

On the other hand, point of entry systems witnesses higher adoption in North America and Europe, primarily owing to aesthetic value. POE units are concealed and centrally fitted, negating the need for installation of separate filters. The segment accounted for 8.3 million units in 2016. 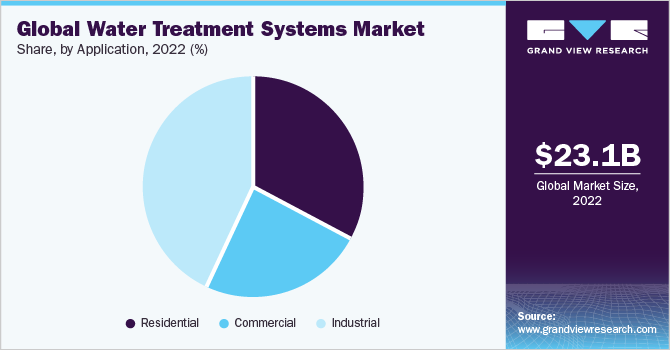 The non-residential segment consists of commercial establishments, healthcare facilities, industrial units, sports facilities, education institutions, and transportation facilities. This segment is estimated to register the fastest growth in terms of both volume and revenue.

Asia Pacific is estimated to lead the global market over the forecast period. Economic performance is projected to rally in China in the coming years with large-scale investments in technology and research. China is undertaking massive changes in the water supply and sanitation scenario in the country to overcome numerous challenges including economic disparity between urban and rural population and increasing urbanization. Water pollution, contamination, and scarcity are also posing as challenges to the nation.

The European market consists of major countries such as Russia, Spain, Germany, Italy, and U.K. Europe was the second largest regional market, in terms of revenue, with a share of more than 26.0% in 2016. This can be attributed to high demand for high quality systems from several major end users, include residential and non-residential applications.

Global multinationals dominate the industry and are majorly concentrated in North America and Europe. The top manufacturers occupy over 70.0% of the global market, with U.S. and China accounting for substantial exports volumes. Pricing and several other strategic market initiatives depend on these top players.

Numerous water treatment system manufacturers are shifting focus toward developing systems and units that can function without constant electricity supply, so that these units can be used in remote and rural areas as well. Manufacturers are also paying close attention to formulating new business strategies to consolidate their market position. Companies are investing heavily in research and development and in introducing innovative designs with enhanced capacities.

This report forecasts revenue growth at global, regional, and country levels, and provides an analysis on latest industry trends and opportunities in each of the sub-segments from 2014 to 2025. For the purpose of this study, Grand View Research has segmented the global water treatment systems market report on the basis of technology, installation, application, and region.