The global Web 3.0 blockchain market is expected to witness significant growth over the forecast period. The benefits offered by Web 3.0 blockchain, such as anti-monopoly, improved privacy, secure network, data ownership, and interoperability, are expected to drive the market growth. Web 3.0 is the third generation of internet services for websites and applications that focus on using a machine-based understanding of data to provide a data-driven web. The goal of the Web 3.0 blockchain is to create more connected, intelligent, and open websites.

Conference and summits are conducted worldwide for blockchain technology, which provides companies operating in Web 3.0 with opportunities to facilitate a user-friendly and fully functional decentralized web. For instance, in March 2022, Forbes announced its Digital Assets and Web3 Summit, which will gather industry leaders to discuss future opportunities for digital assets and Web3.

Web 2.0 offers interactive features to enable users to create their own content and share it with their follower base. However, it includes various limitations, such as oversaturation and centralization. The Web 3.0 blockchain is based on decentralized operations, which minimize the risk of cyberattacks. Moreover, Moreover, it provides data ownership to users by allowing access only to data owners along with managed access to the readers. 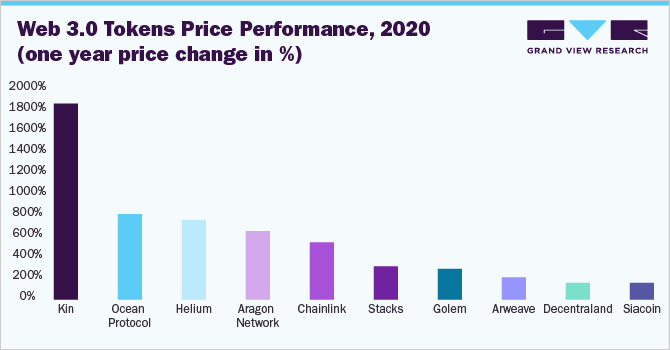 Cryptocurrency is a digital payment layer of Web 3.0 as it offers instant and cheaper transactions. Thus, the growing use of cryptocurrencies worldwide is expected to positively impact market growth. According to the statistics provided by Coinbase, a cryptocurrency provider, in 2021, Coinbase had 8.8 million monthly active users on their platform, which was up by more than 300% as compared to 2.8 million active users in 2020.

Various countries worldwide are making efforts to legalize the use of cryptocurrency in order to attract new players and improve their economic growth. For instance, in March 2022, Dubai announced that it had adopted a new cryptocurrency law to regulate operations of digital assets and cryptocurrencies as it aims to become a Web 3.0 hub. Under the new law, the UAE aims to develop a Dubai Virtual Assets Regulatory Authority, which would be tasked with regulating blockchain-based virtual assets.

The use of Web 3.0 is expected to transform the way social networks work. Blockchain-based social media have full authority over the shared and stored data on the platform. Social media platforms currently do not ensure the safety of users’ data and are witnessing a rise in data breaches. For instance, in October 2020, Facebook was sued for failing to protect users’ data in the Cambridge Analytica breach. However, However, Web 3.0 social networks such as Steemit, onG.Social, and Sola utilize the blockchain technology, which helps to ensure the protection of customer data and allows users to decide whether they want to share their data. Moreover, these networks empower the users by rewarding them with some form of assets for their content.

The number of Web 3.0 powered messaging apps is witnessing a significant rise, which is contributing to the market growth. These apps include e-Chat, ySign, and Riot, among others. e-Chat is a decentralized Web 3.0 powered app that offers secure messaging services to users and enables them to send cryptocurrencies. The messenger ensures data privacy and does use users’ personal information for advertising purposes.

Moreover, venture capital firms are increasingly investing in blockchain-based startups, creating new opportunities for market growth. For instance, in December 2021, Antler, a venture capital firm, announced that it would invest USD 100 million to USD 500 million to fund 25 to 30 Indian startups operating in the Web 3.0 and blockchain space over the next three years.

Major players operating in the market include Web3 Foundation (Polkadot), Helium Systems Inc., Ocean Protocol Foundation Ltd., Zel Technologies GmbH (Flux), Kusama, Livepeer, Inc., and Filecoin, and Kadena LLC, among others. These companies are focused on strategies such as partnerships and mergers & acquisitions to strengthen their position in the market. For instance, in January 2022, Mphasis, an information and technology company, announced its collaboration with CrossTower, a cryptocurrency exchange solution provider. The collaboration is aimed at creating a Center of Excellence focused on Web 3.0 and blockchain-based products, which will be launched and traded on the CrossTower platform.