The global wireless mesh network market size was valued at USD 6.60 billion in 2019 and is projected to expand at a CAGR of 8.8% from 2020 to 2025. The global market is driven by the accelerated usage of Artificial Intelligence (AI) and Internet-of-Things (IoT) technologies in various industries. In addition, increased usage of mobile and handset devices along with the rise in suitable technologies used in handsets will drive the market further.

The development of smart cities and smart devices, with an emphasis on enhancing the mode of communication between government offices and municipalities, is also likely to contribute to the WMN market growth. WMN is also used in smart street lighting infrastructure to control the density of lights for optimal usage. Other industrial sectors, such as oil & gas, chemicals, and mining, also use such networks for improving communication facilities in remote locations. 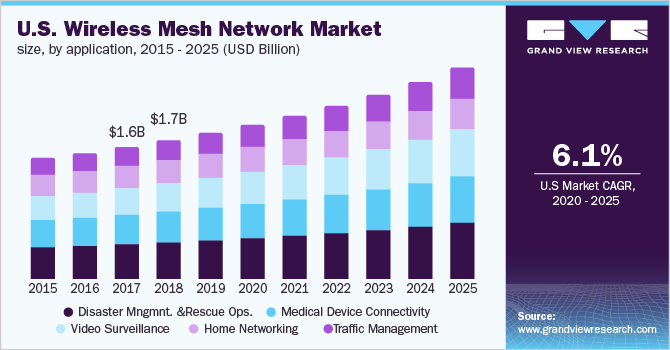 The wireless mesh networking market has seen a rise in video surveillance application, which is used by various government agencies as a security solution that keeps a record of employees and buildings. The application benefits government in safe-guarding public from assassinations and terrorism. The WMNs are also used in monitoring traffic condition, which is helpful in preventing road accidents.

The widespread growth of WMN is largely influenced by the implementation of large events and public places. With the growing adoption for 3G, 4G, and LTE technologies, the global wireless mesh networking industry is expected to witness rapid development. North American is expected to lead the global market in the future as the region has a large number of Wi-Fi/WLAN networks.

Globalization has resulted in increasing demand for wireless connectivity and broadband facilities. Organizations are largely adopting wireless connectivity in order to establish points of contacts in remote locations and harsh environments where in laying wired systems becomes a tedious task. Educational institutes prefer wireless systems that connect the entire campus with mesh topologies and enable sharing of files without interruptions. These factors are expected to drive the market for wireless mesh network.

Across the globe, various governments have initiated projects for digitization of their systems and launched e-government projects. Due to these initiatives, there has been an increase in the application of wireless connections across numerous government offices. Recent advancements in the field of Internet of Things (IoT) and Artificial Intelligence (AI) has further increased the demand for wireless networks and strong Wi-Fi connectivity. The accelerated adoption of these technologies by government, healthcare, hospitality, home networking, industrial and, transportation segments is expected to fuel the market growth for wireless mesh network market.

The major mesh clients consist of wireless connected devices such as cell phones, tablets, and laptops. The rise in consumer adoption of connected devices has led to the implementation of wireless mesh network infrastructure. Furthermore, the growing investments towards developing wearable technology such as smart watches, smart wallets, and smart luggage will positively favor the development of wireless mesh technology for robust connectivity and communication. Moreover, the increasing penetration of mobile devices in developing regions such as Asia Pacific and Latin America has led to the increase in scope for implementing wireless mesh networks to provide internet facilities at an affordable cost. Due to the enhanced reliability and stable connectivity offered by these networks, the increase in mobile devices will stimulate the market for wireless mesh infrastructure.

The disaster management & rescue operation segment is expected to lead the market over the forecast years. With the increasing proportion of climatic disasters due to rise in temperatures, rescue operations need to be improved with the aid of mesh networks. These networks are also used in military applications for enhancing communication between the team. The video surveillance segment is expected to witness the highest CAGR as video surveillance offers a human-friendly interface and thus is a preferred security solution over others.

It also offers structural flexibility, improved coverage, and high-speed short distance transmission capability. The market’s influence is significant in the Asia Pacific region as the region is considered to be an emerging economy. WMN finds applications in public safety, industrial automation and monitoring, mining automation, and environmental monitoring domains. Moreover, these networks are implemented in commercial segments including malls, shopping centers, and hi-tech city parks, which are a part of the smart infrastructure development in this region.

The smart cities & warehouse segment led the WMN market in 2019. Mesh network is used for security and safety purposes and smart metering applications in smart cities. It also help controls traffic congestion situations in smart cities. The oil & gas segment is expected to be the fastest-growing segment over the forecast period. The oil & gas market sees the maximum usage of WMN as the market is fluctuating and operators are innovating ways to optimize the production while minimizing costs. WMN is used in the government sector for improving the quality of communication and for improving the education sector through the adoption of technologies, such as online courses and webinars. Similarly, its application in the healthcare segment is gaining traction due to wireless mobility that gives quick access to patient information at the healthcare facility. 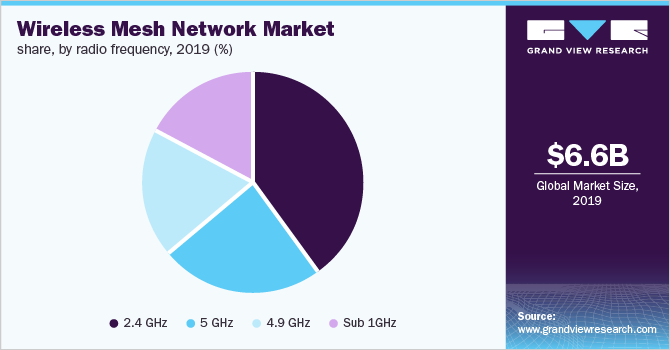 5 GHz is estimated to emerge as the fastest-growing radio frequency segment over the forecast period. As per the World Telecommunications Conference, 5 GHz spectrum was allocated for unlicensed usage by developed countries. 5 GHz enables to fulfill the growing necessity for a higher speed of operating. The market is expected to witness growth in applications across the utilities and oil & gas sectors by providing a safe and secure system for operations. Moreover, governments in emerging economies have been taking initiatives, such as smart metering, that would replace electricity meters through the usage of mesh network.

North America was the dominant regional market and was valued at USD 2.60 billion in 2019. The growth can be attributed to increased demand for high-range and low-power consuming Wide Area Networks (WANs). On the other hand, Asia Pacific is anticipated to be the fastest-growing regional market over the forecast period. This can be credited to the rising number of smart cities development initiatives by various governments to enhance operational efficiency and optimize resources. In addition, rapidly developing oil & gas industry in the region will further boost growth of the WMN market. 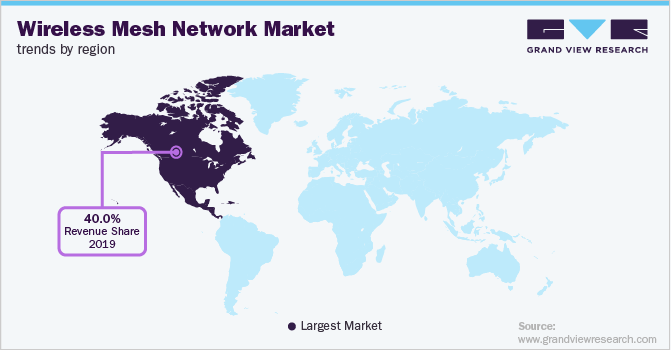 The Asia Pacific regional market is expected to witness the fastest growth in the wireless mesh network market and is projected to rise at a CAGR of 13.7% over the forecast period. This growth may be attributed to the increasing number of smart city projects that aim at offering a safe and secure communication structure to the society.

Prominent companies in the global wireless mesh network industry are Cisco Systems, Inc.; Aruba Networks Inc.; Ruckus Wireless, Inc.; Strix Wireless Systems Private Ltd, Tropos Networks, Inc.; and Synapse Wireless, Inc. These companies are increasingly expanding their services in the government and defense sectors. They are also expanding their R&D facilities in unexplored regions to strengthen their market position. For instance, in April 2017, Cisco Systems, Inc. inaugurated its cyber range lab in India with a view to offer specialized technical training workshops to security force. It inculcates cyber defense techniques in security personnel to prevent cyber-attacks. Market participants are further emphasizing on collaborating with other firms to expand and optimize their market share.

This report forecasts revenue and volume growth at global, regional, and country levels and provides an analysis of the latest industry trends in each of the sub-segments from 2014 to 2025. For the purpose of this study, Grand View Research has segmented the global wireless mesh network market report on the basis of radio frequency, application, end-use, and region: 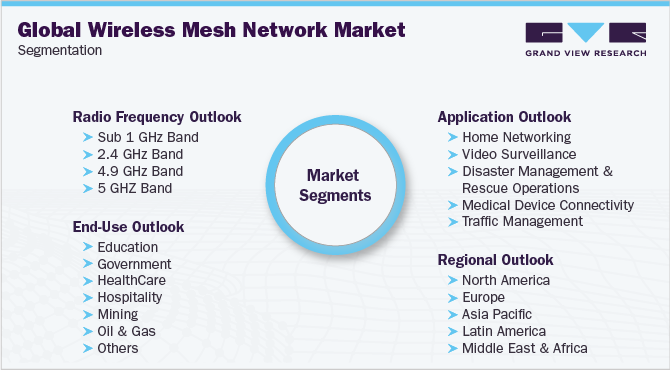