Carbon capture and storage is an imperative resolution in the contest against the global changes in the climatic conditions. The technology’s significant request to the capture and storage of carbon emissions from various industries mainly from the power stations, the CCS plays an essential part in controlling greenhouse gas emissions along with maintaining the supply security.

Recent estimates from the International Energy Agency (IEA)revels that the CCS is expected to contribute to one-fifth of the total carbon emission reductions till 2050, both in the industrial and the power sector. 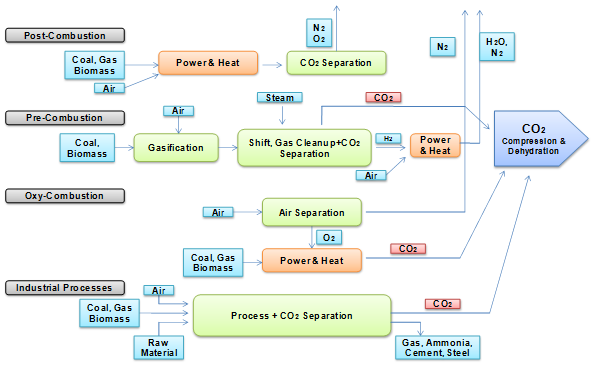 Energy demand has been rapidly increasing; however along with it the reductions in the global carbon dioxide emission must be obtained in order to maintain a healthy environment currently and in the future. However, a number of clean technologies have been deployed and further developed (e.g.wind,nuclear, solar) especially in the power generation sector, the rising energy demand is expected to result in increased use of fossil fuels, the key source of present CO2 emissions.

The high cost of the technology is a major drawback. However, the technology providers have been working on research and development to increase the economies of scale of the CCS projects. ExxonMobil, a prominent player in the CCS industry, has come up with a new proposition. It states that on utilization of amine scrubbing technique in CCS plants, the entire exhaust from the power plant will be directed towards a carbonate fuel cell that will generate around 20% excess power overall. This will cut down 10% of the cost of the power owing to diversion of the stream. However, the CO2 still needs to be disposed off.

Carbon capture, transportation, and injection underground into deep geological formations are in practice, however on a relatively small scale. Globally there are only 15 active commercial-scale CCS projects out of which eight projects are in the U.S. Moreover, over 45 additional projects are under development and are expected to come online in next few years globally.

In various sectors, the component technologies of CCS systems have been applied, but combining them in a full-scale operating power plant has yet not been accomplished. The petroleum industry has been deploying CO2 injection technique in enhanced oil recovery (EOR) across various matured oil fields for over forty years globally. With the increasing profitability from the matured wells on application of EOR activities, many governments have shown interest in providing financial incentives to develop CCS demonstration projects.

For the CCS technology to apprehend its full prospective to decrease carbon emissions growth, it would have to be functional on a much bigger scale than it is currently being undertaken for process such as mainly enhanced oil recovery. Currently meaningful industrial CO2 capture is required particularly in the power sector. In spite of numerous CCS projects being announced globally, not all of them have progressed. This is a testament to the difficulty in developing these complex projects.