Hydrogen is not an energy source but is a carrier of energy. Hydrogen can retain and deliver consumable energy. It does not exist by itself, but is extracted from compounds that contains hydrogen. It is used in fuel cells to generate power through chemical reaction. Hydrogen storage is a technology for the hydrogen and fuel cell offering applications in onboard vehicular, stationary power, portable power, and transportation.

Hydrogen has low density and high energy per mass, and storage technologies have the potential to higher the energy levels of hydrogen. Either hydrogen can be stored physically or material based. Physical form of hydrogen is gas or liquid; whereas material based hydrogen is stored in compounds.

Storage of hydrogen as gas requires high-pressure tanks and as liquid requires cryogenic temperatures. Hydrogen stored in condensed state on the surface of solids through adsorption (physisorption) or within the matter through absorption (chemisorption) method. Potential elements that can store hydrogen are lithium, beryllium, boron, carbon, nitrogen, oxygen, magnesium, sodium, aluminum, silicon, sulfur, and phosphorous.

Storage of hydrogen is a major challenge for stationary, portable, and transportation application due to its low-density property. It is stored in three form gas, liquid, and solid. The density of the hydrogen varies in different forms of storage. This storage is classified into material based and physical based hydrogen storage. Physical based includes hydrogen storage in gas and liquid form. 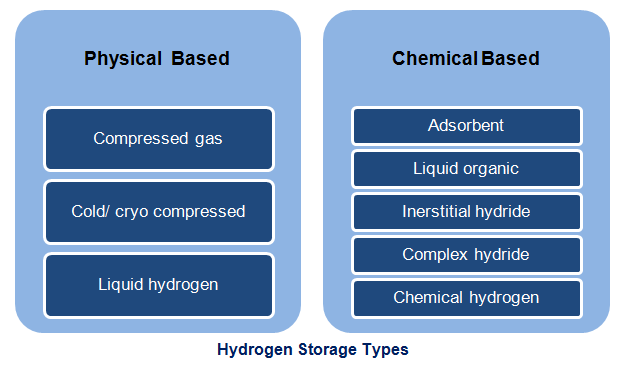