When there is a huge solar energy spill, Its just called a “nice day”.

Climate awareness is growing among people with every passing day. Greta Thunberg, a Swedish 17-year-old school going girl showed the entire world the risks of climate change. This event also highlighted the rise in amount of awareness about climate in the world; proof of this can be seen from the popularity of Fridays For Future & massive support received by Greta from every nook and corner of the world. This awareness is the key reason as to why the world leaders are turning towards the renewables as the last resort to tightly balance both, the need of energy as well as climate sustainability.

When it comes to renewables, solar energy is one of the best substitutes to fossil-based energy resources. It is an infinite source of energy with unmatched potential, just waiting to be harnessed. In this scenario, infrastructure needed to harness solar energy becomes extremely important and has come a long way since its inception. Recent addition to this state-of-the-art infrastructure is solar tracker, which now has an important role to play and is used world over to increase the efficiency of solar panels. So much that, Solar Tracker Market is expected to grow at a CAGR of 32.0% from 2019 to 2025, according to a research report by Grand View Research, Inc.

Solar tracker is a product that aids in directing payloads towards the direction of sunlight. The payloads that are majorly used are parabolic troughs and solar panels. It maximizes your solar system’s electricity production by moving your panels to follow the sun throughout the day, which optimizes the angle at which your panels receive solar radiation. Solar trackers are typically used for ground-mounted solar panels and large, free-standing solar installations like solar street lights.

The usage of trackers as an additional device could further improve the energy efficiency of the application in terms of quantity of energy received through the panels. The low maintenance cost of the product coupled with reduced electricity costs can improve the efficiency of solar panels.

There are two types of solar trackers -

Although the dual axis tracker provides a better capability to the panel, it is a much less popular option for solar installations, even among large, utility-scale projects. This can be aptly depicted by the pie chart given below. 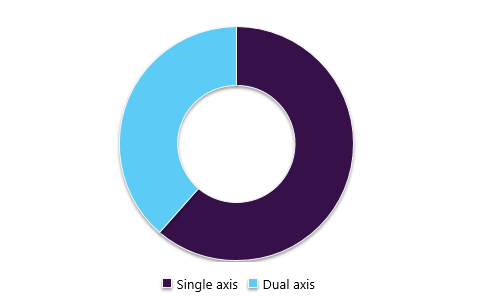 Solar trackers are comparatively new, when it comes to solar infrastructure. However, it has gained a boost from the market, riding on some crucial factors which are the driving forces behind it. Due to these following factors, market demand for solar tracker is expected to reach 172.0 GW by 2025.

Points That Can’t Be Overlooked

As the solar tracker technology is in its nascent stage, plenty of obstacles are there that can’t be overlooked. They are needed to be tackled and cleared.

The manufacturers are investing in major solar installation projects around the world to increase their geographical presence. The major strategy used by industry players is a rapid market expansion to gain maximum market share.

Key market players in the global industry include AllEarth Renewables, Inc.; NEXTracker, Inc.; Soltec; PV Hardware; Artech Solar; NClave; and Powerway Renewable Energy Co. Ltd. These companies offer a diverse portfolio in the market in terms of products and are highly integrated across the value chain.